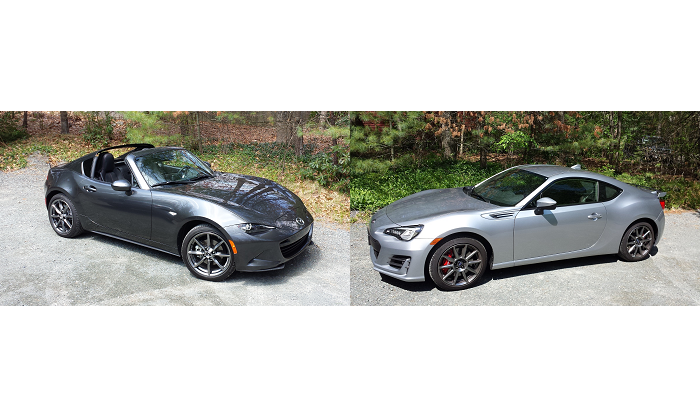 We tested the 2017 Mazda Miata RF and the Subaru BRZ back to back. We found some striking differences and surprising similarities. Help us pick a winner.
Advertisement

The sports car gods have blessed Torque News this month. We have tested the 2017 Mazda Miata RF Grand Touring and the Subaru BRZ Limited, the top trim of both of these rear-drive hard-top sports cars. We also tested the 2017 Fiat 124 Spider Classica. We are leaving the Fiat 124 Spider Classica out of this comparison because, unfortunately, after we looked at our notes it didn’t win any categories. The Miata RF and the BRZ, on the other hand, both win some categories outright and tie in others. Help us decide which is the better car with your comments. Here’s what we found.
- Related Story: Why Didn't We Compare the Toyota 86 to the Miata RF?

Subaru BRZ Limited vs. Mazda Miata RF Grand Touring – Engines and Transmissions
The Subaru BRZ has 205 hp when equipped with its six-speed manual transmission. The Mazda Miata brings just 155 hp to the table with a six-speed manual. No brainer, right? A win for the Subaru. Not so fast. The BRZ is not faster than the Miata RF. In fact, most magazines that hooked them up to any sort of instrumentation found both to run from 0-60 MPH in about 6 seconds. Both pull strongly from first, and neither has any lag (we are looking at you Fiat Spider).

- Related Story: Miata is faster than what car?

The truth is, these two cars feel very similar in a sprint and the engines are both joys to flog. To our seat of the pants judgment, the Miata has a slight edge here for one reason. It seems to have more linear acceleration. The BRZ is strong in the low ranges, but it does not come alive as the revs grow. The Miata’s drivetrain also has another very slim edge. It is rated at 29 MPG Combined, while the BRZ is rated at 24 MPG combined. We actually saw the Miata’s advantage in our testing, so it is hard to deny the cost of ownership advantage the Miata has. The EPA estimates that the Miata will use $4,500 less in fuel over ten years. Remember that number. We will come back to it.

Both gearboxes are excellent. If we had to pick, we would give the BRZ the edge since its pull-up reverse lockout feels better in operation than the Miata’s push-down lockout which is vague. This is a very small edge.

Miata RF Grand Touring vs. Subaru BRZ Limited Handling
As we mentioned, we tested the top two trims of both of these vehicles, meaning they had the most expensive content. In the case of the Miata, the Grand Touring is actually a bit softer than the RF Club with the Brembo package. That car would have been a better comparison for the BRZ we tested which had a Brembo SACHS brake and suspension package. So which did we like better? The BRZ.

The BRZ we tested was a bit sharper than the Miata RF. If you want the sharper handling of the Miata Club and its package, try it out. We are still going to say the BRZ has a very slight edge.

Price – Miata RF Grand Touring vs. Subaru BRZ Limited (with Performance Package)
Our Miata tester rang in at $33,925. The BRZ we tested cost $29,660. So if the initial price is your only consideration, the BRZ is less expensive. However, remember we spoke about fuel costs a little earlier? Well if you add the $4,500 in added fuel costs to the BRZ, what do you get? $34,160 is the answer. Over time these two cost the same, assuming the insurance is equal. Tie.

Size Comparison BRZ vs. Miata RF
Win for the BRZ! Hands down, the BRZ is the bigger car in a tiny car segment. That matters. Not only did the BRZ have more usable cockpit space, it has a pair of rear jump seats we successfully put a 6-year-old in. You can’t do that in the 2-seat Miata. More importantly, the BRZ has dramatically more cargo area. We stuffed a 6-foot by 3-foot folding table, a picnic kit, and a lawnchair into the BRZ. It’s storage capacity rocks and this one is easy to call a BRZ win.

Roof & Top Comparison – BRZ vs. Miata RF
Miata wins since the BRZ has only a fixed roof. The Miata RF’s power-operated retractable hardtop is functional, cool, lightweight, and to our ears made the Miata RF quieter inside than the Subaru BRZ’s fixed roof. Sorry, to be banal, but this one matters and it is a big win for the Miata RF.

Interior & Infotainment Comparison – BRZ vs. Miata
Subaru did the BRZ no favors with its goofy subscription-based Nav. Our test BRZ had no nav. The audio is also mediocre. The Miata, on the other hand, has an excellent infotainment package with Nav included. The Miata’s interface and audio is also superior. The BRZ had Alcantara seat material which is very cool. However, the Miata had leather. On the strength of the Miata’s better infotainment and included Nav, we have to call this category a clear Miata RF win.

Other Features – Miata RF vs. BRZ
Our BRZ had LED headlights. Big deal, the Miata RF Grand Touring has adaptive front headlights that turn when you turn the car. Both worked well, but the moving headlights are just so cool. However, the BRZ has an ace up its sleeve, or actually, in the cargo area. It has a spare tire. The Miata has a goofy repair kit. These two major features could make this a win for either depending on how much you value the lights or spare. We will say this; as the former owner of a Miata that had two flats in four years, that spare is my choice – Win for the BRZ.

Conclusion – Miata RF vs. BRZ
How this one turns out is up to you. How much do you value the differences? Are swiveling headlights more important to you than a spare tire? What about initial price vs. long term costs of ownership? Most importantly, would you prefer to have a retractable hard top roof or a huge cargo area and a back seat? Let us know which one you chose in the comments below and why.

youcanrunnaked wrote on May 24, 2017 - 5:43pm Permalink
I liked both and had a difficult time deciding. I think they both look great. Test-drove the BRZ twice, (ND, once) before making up my mind. The BRZ had better steering; the ND had better throttle response and shifting. I did not like the BRZ's exhaust drone. ND had the nicer interior but BRZ had the more comfortable and useful interior. The ND had the folding top -- big advantage in my book; rear sear and/or trunk space was less important to me.
John Goreham wrote on May 24, 2017 - 8:40pm Permalink
Good breakdown! As much as I liked the cool sounds around town, the BRZ's exhaust drone was pretty tough to take on long drives. Glad you added that. So you chose the Miata RF?
Youcanrunnaked wrote on May 25, 2017 - 10:15am Permalink
Thanks. I bought the soft top in Oct. 2015. I knew a folding top was probably coming, but I was not interested in it for me.
Dave wrote on May 25, 2017 - 4:10pm Permalink
If the top doesn't drop, it's not REALLY a sports car! Got to have the convertible or retractable top. My 2005 Mazdaspeed turbo Miata never has the top up unless it's raining. It's the differentiator.
Wayne Sebly wrote on May 30, 2017 - 4:51pm Permalink
I being 6'2" tall could not comfortably fit in the Miata. Nice car none the less. I bought a 2016 Scion FRS(Subaru Twin) and I fit very comfortably and it handles extremely well.