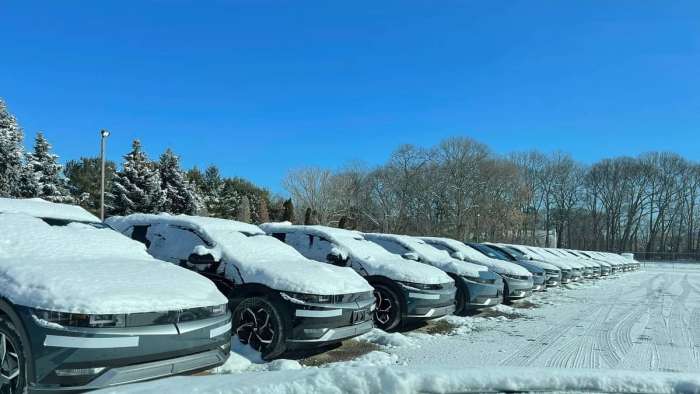 One Image That Conveys How Serious Hyundai Is About Electric Vehicles

This image of a long row of Hyundai Ioniq 5 battery-electric vehicles at one American dealership helps to illustrate just how serious Hyundai is about its newest BEV.
Advertisement 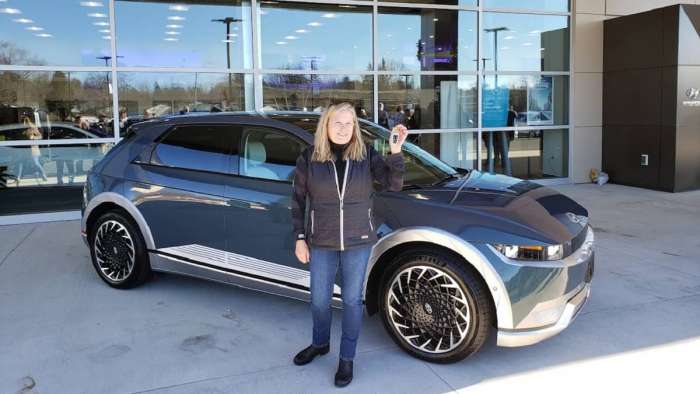 East Coast EV Launch?!
As you can see, the Hyundai Ioniq 5s in that long line are not basking in California sunshine, but rather snow from the Northeast. Most EV makers have a policy of launching their new EVs in California and other nearby EV-friendly states for many months before they allocate inventory to the colder climate states. EV leader, Tesla, was a pioneer in this practice. Tesla basically started with Elon Musk himself, then its Freemont employees, and later worked its way outward into California with its Model 3 launch. Mazda is presently supplying its MX-30 BEV in California exclusively, and Honda went so far as to pull its Clarity inventory back to California after it decided to wind down that popular EV line.

The Initial Launch Was Not A Gimmick
Torque News was present in chilly December when Hyundai delivered its very first Ioniq 5 to an East Coast customer in Massachusetts. Hyundai invited the media to the launch on both coasts, which took place the same week. We’re not dissing any of the other automakers we mentioned. They are fine companies with great vehicles, but if we keep showing off and launching EVs only in the Golden State, the myth that EVs don’t work in winter is never going to end. Kudos to Hyundai for covering the country a bit more fully than many other automakers have done in its initial launch.

EV Inventory?
Stories of new Hyundai Ioniq 5 BEV owners who purchased their car on the spot from inventory are now quite common. As you can see, Hyundai is banging out the inventory and dealers are not just getting one or two token cars. When was the last time you drove past a local retail outlet and saw a line of cars that long in stock? It’s been about two years since I have.

How Many Ioniq 5s Are In Stock?
We reached out to Centereach Hyundai in New York and asked for sales. The helpful person who answered told Torque News that at the time of our call the dealership had “About 25 Ioniq 5s in stock. Most are unallocated.” That means they are not all vehicles awaiting pick up by owners who pre-ordered them.

This vs That? Or Every EV Is a Win?
We would not use an image from Ron and try to use the “Us vs. Them” gimmick to draw readers. You see, Ron owns a Tesla Model Y and also a Hyundai Ioniq 5. Let us make clear that we see every EV as a win for its owner and the environment.

It’s been a long time since we have seen a row that long of any model in any dealership. Kudos to Hyundai for sending so many to snowy New York. Please tell us in the comments below if you are happy to see Hyundai leading the way in the widespread adoption of battery-electric vehicles.

Our thanks to reader Ron DeMarco for the permission to use his image. Second image by John Goreham

Please note that this story is not a paid promotion. We did not coordinate or plan its publication with Hyundai or its dealer.