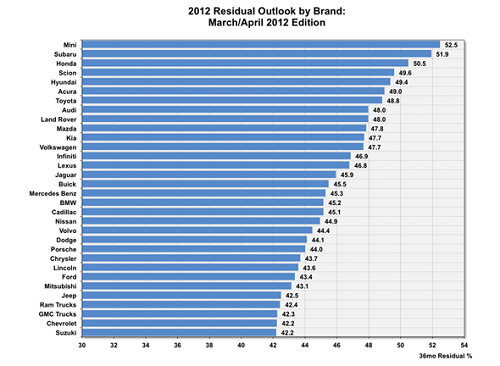 In a recently issued report by ALG, many assumptions about automobile residual values are proven false.
Advertisement

The conventional wisdom about automobile residual values is that the premium brands hold their value best. Another common perception is that the Detroit based manufacturers have made big gains in quality and thus, are now holding their value as well as overseas rivals. In a recently issued report on 2012 residual value, ranked by automaker, ALG shows that these assumptions may be more wrong than many would imagine. ALG, based in California, has been providing residual value information to the auto industry and auto analysts for over 45 years.

One very surprising outcome of the report was that Honda and Toyota both did better than their own premium brands. In the report Hondas are shown to hold value better than its premium brand Acura by a full percentage point. Toyota beats Lexus even more soundly with a two percentage point difference. Even Scion, a small marque created by Toyota to cater to entry level, young, urban customers, beats Lexus.

Overall, traditional premium brands like Mercedes, Cadillac, BMW, and Volvo finish mid-pack. The highest ranked premium brand is Acura, finishing 6th on ALG’s list. Ford’s Lincoln brand is the worst performing premium brand finishing near the bottom of all automakers in the bottom third of the rankings.

Product mix is one reason why some of these brands do so poorly. When ranked by vehicle type, sporty cars do the best. They hold their residual value about ten to twelve percentage points better than full size SUVs, full size vans, and pickups. So not selling those types of vehicles can have a positive impact on a brand’s overall score. This same product mix issue also hurts brands that make big vehicles when they are ranked by the EPA according to fuel efficiency. However, these types of vehicles are very profitable for automakers, so it is not a bad problem to have.