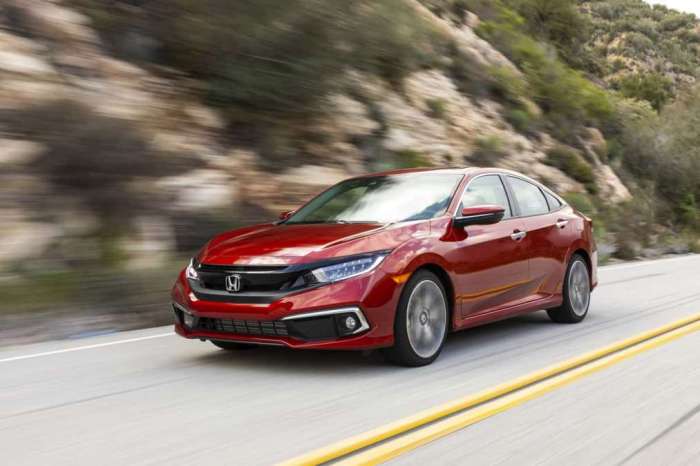 We explore the real-world costs of a Honda Civic to see if the myth of rapidly rising car prices is true or busted.
Advertisement

Lazy automotive media content providers dread the final Friday at 4:30 story. Which stale topic to recycle? The flying car? I drove a tank? 3D printed cars? Or perhaps the old standby that really works great as clickbait. Cars are getting much more expensive!

The last title always works. And the reason it works is simple. Inflation. The actual value of the U.S. dollar declines steadily over the years. Recently the rate has been at about 2.5% annually. The mainstream media report that cars are getting more expensive over time not realizing the true cost is not changing. Here’s the truth. Cars are not really changing much in cost to consumers. This despite having dramatic improvements in performance, size, safety, fuel economy and cost of ownership.

Let’s take the Honda Civic EX 4-door sedan as a prime example. The Civic is arguably the top-selling affordable family sedan in America over the past 30 years. Sure, a couple of sedans in its class have had some good sales years. Mainly due to base trims being sold to rental car fleets. Honda doesn’t play that game. Honda avoids the fleet market as part of its strategy to maintain good resale value.

Why the Honda Civic EX 4-door trim? The EX is a well-equipped trim. We picked it so that we can highlight some infotainment features in the summary of the story. Why a 4-door? Because families buy four-doors. We also like the Civic example because the car has existed now for 30 years with exactly the same trim name and the manufacturer’s suggested resale price data is easy to find in a quick Google search. The top search results for the Civic's past MSRPs come courtesy of Autotrader. So we used those numbers.

As you can see, the Honda Civic’s new-car cost to a buyer has not changed in any meaningful way over the past three decades. Does the 2020 cost being slightly higher negate the point of our story? Of course not. It’s only February, and the U.S. dollar has 10 more months of inflation before it ends the year. Honda has already adjusted its 2020 Civic price for the calendar year. 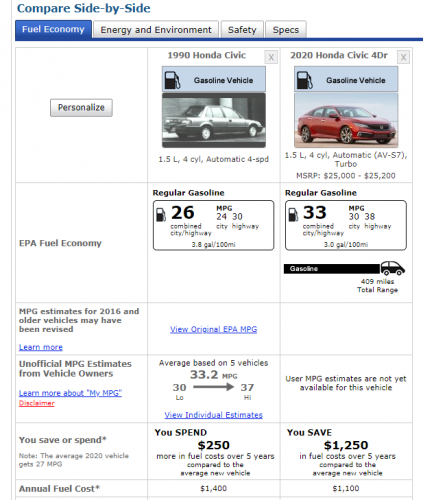 Now, let’s talk about what you get when you buy a Honda Civic EX today vs. in 1990. The ’90 Civic was a subcompact car with 88 cubic feet of passenger space. Today, the Civic is a midsized car with 98 cubic feet of passenger space. The trunk has grown from 12 cu ft to 15. Power has improved most dramatically. A 1990 Civic had 92 hp. Today it has 180 hp. Being a much, much larger car, fully three segments larger, and with double the power, the new Civic must get much lower fuel economy, right? Wrong. The new Civic gets dramatically better fuel economy with a 21% increase since 1990 to 33 MPG vs 26 MPG. The new Civic also emits less greenhouse gases and has a much better EPA smog rating. The new Civic will cost its owner $3,000 less in fuel over ten years of ownership. And remember, gas prices in 1990 (or any year) can also be adjusted for today’s dollar.

Related Story: How Many Times Since 1929 Has Gasoline's Annual Average Price Been Fifty Cents From Today's Price?

We could compare safety specs, but you know that every new Civic EX has Honda's most advanced safety features. None had yet been invented in 1990. And then there is size and weight. Being larger and heavier, the new Civic is much safer if a crash does occur. The new Civic EX also comes with Android Auto and Apple CarPlay standard. That means you have Nav, music, and much more at no added cost to you.

Here’s a parting thought; Can you guess why the U.S. dollar deflates in value each year by about 2.5%? The answer is the cost of living wage increase. People want to feel as if they are making more money for doing the same work each year. Heck, they deserve it, right? So the government helps them (and employers) feel good and adjusts the value of the dollar so they can get a “raise.”