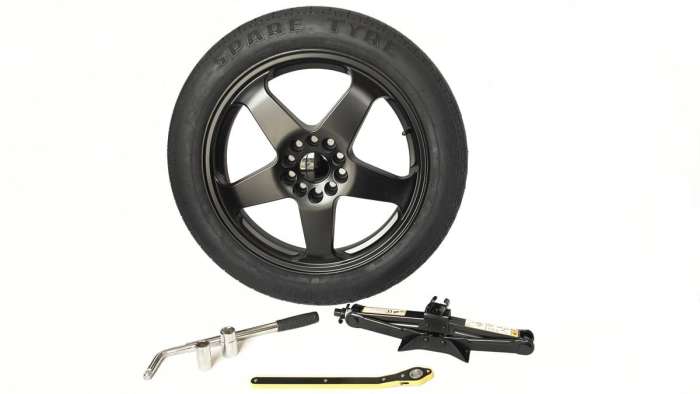 If you own a Ford Mustang Mach-E you know that the vehicle did not come with a spare tire. Here is one solution if you want one.
Advertisement

If you drive a new Ford Mustang Mach-E congratulations! The Mustang Mach-E is winning over fans and new owners as fast as Ford can ship them. However, it is worth noting that every one Ford ships from its factory in Mexico lacks a basic piece of safety equipment. A compact spare tire. Which is unusual, since every top-selling Ford vehicle model produced has a spare tire standard.

This is a trend that has been ongoing for a while now. As automakers launch new models, particularly green models, they steal the spare. Leaving you with fewer options to protect yourself and your family in the event that you damage a tire.

Fortunately, the aftermarket has picked up where your automaker deserted you. Modern Spare started as a company that provided spares for Corvettes but has recently been a very popular supplier to Tesla owners. All of whom purchased vehicles with no spare tire.

Modern Spare offers both compact spare tires and also spare tire kits if you wish to carry your own tools to change the tire, rather than trust roadside assistance to do it for you in a pinch. There are three choices and prices start at about $350 plus $45 for shipping. You can jump to the Modern Spare Mustang Mach-E page here.

Like all manufacturers and suppliers, Modern Spare has struggled to keep pace with booming demand. We’d suggest calling to check availability. Since this is not an advertisement for the company, we’ll let them help you from here. The company says on its website that the backorder is roughly 30 to 45 days from the time of order.

Modern Spare has earned many fans among Tesla owners. We mention Tesla simply because the brand predated the electric Mustang Mach-E. You can use keyword searches on Facebook or other social media sites to learn more about customer opinions of the company. With multiple social media flat tire posts from Ford Mustang Mach-E owners, we felt the Mustang Mach-E community may appreciate knowing that there is an option out there.

If you have purchased a product from Modern Spare, please tell us about your ownership satisfaction in the comments section below.