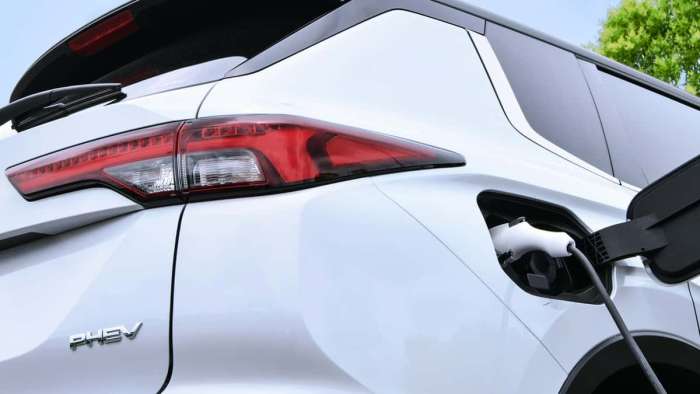 Mitsubishi says its all-new Outlander PHEV will come in this fiscal year.
Advertisement

Mitsubishi pledged this week to bring a new Outlander PHEV (plug-in hybrid-electric vehicle) to market within this fiscal year. If we understand what Mitsubishi is saying, that means its arrival should be prior to April 1st, 2022. The current Outlander PHEV is a slightly refreshed version of the one that has been on the market for many years. The original Outlander PHEV was first shown in 2013 and has since become one of the world's top-selling PHEVs.

Known Changes
The next model year Outlander PHEV should be a clean-sheet design. It will feature a longer all-electric range and a twin-motor 4WD PHEV system. Most importantly, Mitsubishi will increase the hybrid-mode fuel economy beyond its present 26 MPG.

What We Expect in a New 2022 Outlander PHEV
The most important thing for Mitsubishi will be EV range. We would expect a minimum of 35 miles of all-electric range. Second, the hybrid-mode fuel economy must at least reach 35 MPG. The current Toyota RAV4 Prime has a 42 mile EV range and a 38 MPG hybrid-mode MPG. In addition, we would expect any modern vehicle launched in 2022 to have wireless Android Auto and Apple CarPlay integration.

2022 Outlander PHEV - Price Target
To be competitive, the Outlander PHEV's next generation will need to be sold to the consumer for around $35K. That is after any federal and state EV incentives. This assumes a return to market normalcy and an end to dealer markups, which we have seen as high as $20K for RAV4 Prime PHEVs this past summer.