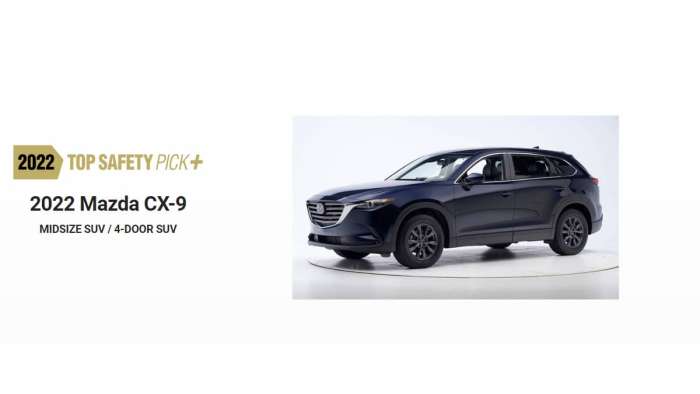 In a new round of testing by IIHS, the Mazda CX-9 was the only 3-row midisze SUV to earn top scores on all aspects of this new tougher test.
Advertisement

The Insurance Institute For Highway Safety (IIHS) released the results of comprehensive side-impact safety testing. The vehicles tested included two and three-row crossovers and SUVs. Of the 18 vehicles tested, only the Mazda CX-9 earned top scores on every aspect if the test in the three-row SUV category.

"Our research has led us to thoughtfully consider the body structure of our vehicles, creating the robust designs we have on the road today," said Mazda Manager of Vehicle Safety Compliance, Planning, & Development Jennifer Morrison. "We are proud to offer our consumers the highest level of protection in the event of a crash."

The new tougher side-impact test is being adopted by IIHS as part of its ongoing efforts to push manufacturers to make safer and safer vehicles as the years pass. The CX-9 was one of the few SUVs to score Good on all aspects of the new test.

As the chart below shows, there are nine individual measurements made following the test crash. The CX-9 scored Good on all nine, thus earning a score of Good overall. Only the two-row Hyundai Ioniq matched this result. 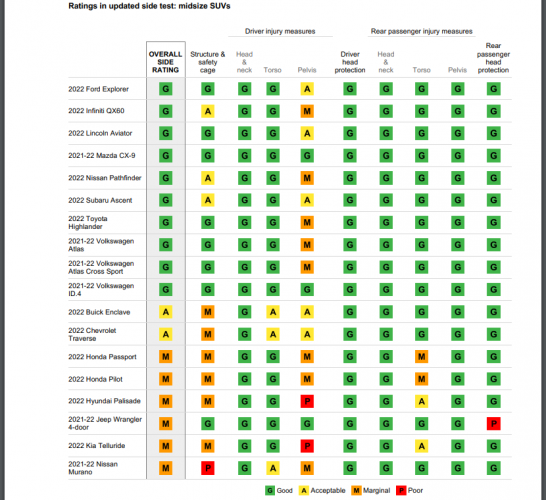 Some three-row models that the CX-9 socred meaningfully higher than in the testing include the Honda Pilot, Hyundai Palisade, Kia Telluride, and Nissan Murano, all of which only earned a Marginal score. The CX-9 also scored higher than the Chevy Traverse and Buick Enclave.

This is not the first time that a Mazda SUV has been ranked highest in side-impact safety. Recently, IIHS tested 20 smaller SUVs and the Mazda CX-5 was the only one to earn a Good rating.

Mazda’s lead in safety continues to be proven in test after test. To date, the Mazda3 Sedan and Hatchback, Mazda6, CX-3, CX-30, CX-5, and CX-9 have all earned the industry’s highest possible rating for safety, the IIHS Top Safety Pick Plus designation.

Images courtesy of Mazda and IIHS
John Goreham is a long-time New England Motor Press Association member and recovering engineer. John's interest in EVs goes back to 1990, when he designed the thermal control system for an EV battery as part of an academic team. After earning his mechanical engineering degree, John completed a marketing program at Northeastern University and worked with automotive component manufacturers, in the semiconductor industry, and in biotech. In addition to Torque News, John's work has appeared in print in dozens of American news outlets and he provides reviews to many vehicle shopping sites. You can follow John on TikTok @ToknCars, on Twitter, and view his credentials at Linkedin