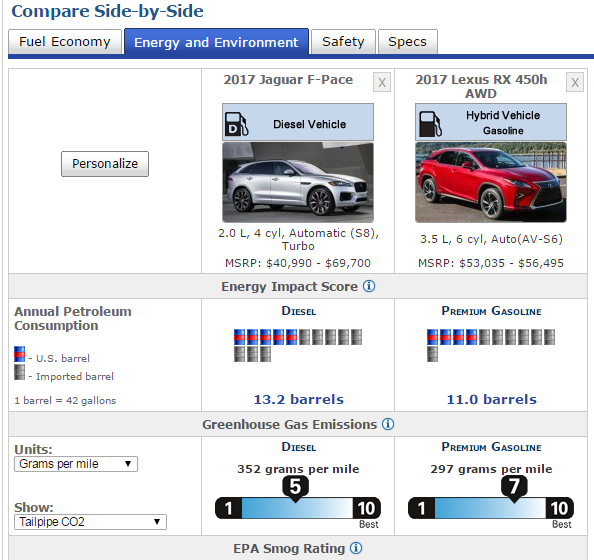 We compare two premium two-row crossovers with a focus on the green vehicle credentials both bring to the table.
Advertisement

The Lexus RX series is the one that started it all. Lexus invented the premium crossover class back in 1997. Shortly afterward, Lexus became the first company to sell a green version of its premium crossover, the RX 400h in 2005. The current generation of the RX 450h now has rivals from many manufacturers. The new Jaguar F-Pace can be purchased with a diesel engine that improves the model’s efficiency. To its credit, Jaguar downplays the “clean” jargon that other automakers have seized upon to market diesels.

Before we begin, a bit about why these two were chosen as the matchup. The new F-Pace is now in its second model year and thus, a real product a buyer can obtain. Lexus sold almost 9,000 of their RX 450H in 2016, so it is indeed a real vehicle people are buying. We recently tested the gasoline version of the F-Pace and were impressed with it in pretty much all areas. It does not line up perfectly with the Lexus RX though. It is a bit smaller in every respect. It is also lighter, which in any green vehicle comparison should be an advantage. We opted to compare the Lexus RX 450h against the F-Pace instead of Lexus’ smaller NX 300h compact crossover to give the Jaguar every possibility for matching the green vehicle credentials of the larger, heavier Lexus. Both the F-Pace and Lexus RX 450h are priced in the low to mid $50Ks when equipped with Navigation, Leather Seating, and Forward Collision Prevention. Jaguar’s on-line configurator was inoperable when we created this piece, or we would have given our readers an exact price point.

Lexus RX 450h vs. Jaguar F-Pace Diesel – Performance
Performance is relative in many ways, but one measure that is easy to use as a benchmark is the 0-60 MPH sprint time of a vehicle. Both Jaguar and Lexus offer this information in their detailed specifications, which is also very helpful. The Lexus, with its much more powerful 269 hp gasoline engine coupled to a 165 hp front electric motor and 67 hp rear motor, can zip to sixty MPH in 7.9 seconds. We have driven the Lexus RX 450h on many occasions and the low-end torque of the electric hybrid drive makes it feel more than adequate off the line. The Jaguar, with it’s 180 hp engine falls just short of the Lexus’ sprint time with an 8.2-second time to sixty MPH.

With both vehicles producing good low-end torque, and having almost identical times to sixty, this category is a tie, which we feel makes the two a great matchup to move on to a comparison of green credentials.

Having not driven the diesel F-Pace, but taking Jaguar’s word for it that it handles exactly like its gasoline variants, we would tip the scales in handling to the Jaguar. However, the crossover class is not exactly a segment in which many owners feel need for their vehicle to be race-track sharp in handling. Comfort matters. We give the Lexus the edge in that regard.

Petroleum Efficiency – Jaguar F-Pace Diesel vs. Lexus RX 450h
Unlike a comparison for strictly financial reasons, a green vehicle comparison needs to take into account the annual petroleum consumption of a given set of vehicles. Not all liquid fuels consume the same amount of petroleum during their processing. The EPA’s site makes this comparison easy by comparing the petroleum used by a vehicle per year. In the case of the Lexus RX 450h vs. the Jaguar F-Pace diesel, the Lexus hybrid consumes 17% less petroleum each year.

Fuel Consumption Jaguar vs. Lexus
The 13.2 barrels the Jaguar consumes vs. the Lexus 11.1 barrels equates to a $50 per year price advantage for the Jaguar when today’s average fuel prices are considered, or about one dollar per week. That is because the Lexus was tested using premium fuel. The Lexus is more fuel efficient in the combined ratings, with the RX 450h earning a 30 MPG rating and the Jaguar F-Pace diesel earning a 29 MPG combined rating. Both are amazing given the 4,000-pound curb weight these vehicles have and their high frontal areas.

Carbon Dioxide Production – Hybrid vs. Diesel
According to the EPA, one’s choice of vehicle has the largest overall effect on one’s greenhouse gas emissions. Of course, that assume one doesn’t have a vacation house they heat and cool when it is not in use. Both of these vehicles do better than average for their size and level of performance. The Lexus produces 297 grams per mile of CO2 and the Jaguar 352 grams per mile.

Smog and Pollution Production – Hybrid vs. Diesel
Smog production varies in a given vehicle by state. Some states use more stringent rules and the automakers adjust the vehicles to meet the state’s guidelines. In our comparison, we used Massachusetts as our state. The Jaguar diesel scores a low 5 on the EPA smog scale, and the Lexus RX 450h hybrid scores an 8 (higher is cleaner). The average of all states moves the Lexus down to a 7 score.

Conclusion – Lexus Hybrid Is Greener Than Jaguar’s Diesel
Across the board, these similarly sized vehicles with similar performance show the same trend. While both have a measurable benefit, the Lexus hybrid technology is greener in terms of petroleum usage, fuel efficiency, CO2 production, and smog production. This despite being larger and heavier than the Jaguar.