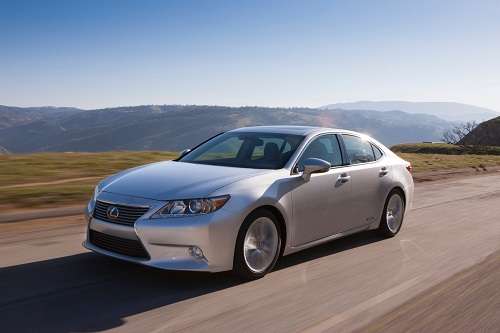 The entirely new 2013 Lexus ES350 is evolving into a line of cars with a new hybrid drive option, new look, and a new interior
Advertisement

New Lexus Look
Lexus is in the final process of completely redesigning the front ends and other aspects of its vehicles’ designs. The spindle grill reported on here recently suits the ES very nicely giving it a more aggressive look. The ES350 has twin exhaust ports in the rear bumper while the new ES300 has hidden exhaust exits. Both feature a new rear deck. The ES is really all new in 2013 and the wheelbase has grown slightly and the body is stiffer.

Once a close sibling to the Toyota Camry, the resemblance and similarities are now growing quite faint as the ES moves upmarket and the Camry now looks more like a Corolla. Lexus has two new colors for the ES called Fire Agate Pearl and Silver Lining Metallic.

New Drivetrains and suspension for the ES
The big news is the addition of the ES300 hybrid to the ES line which had always had one engine. The hybrid drivetrain sounds familiar, being a close relative of the Camry’s hybrid drivetrain. Like other Lexus hybrids, the ES will have four modes. Sport, which sharpens the engine response, “Normal” which provides a balance of performance and economy, Eco, which defaults to the most economical settings and EV which allows for light throttle, low speed electric only driving under some conditions. The familiar corporate 3.5 liter V6 carries over to the new model and that is not a bad thing by any stretch. A six speed automatic accompanies the conventional powertrain.

Opposite-wound front coil springs and a new rear suspension geometry improve straight line stability and smooth out the already creamy ride of the ES. The steering ratio is changed to increase crispness. More high tensile strength steel and additional welds stiffen up the body. Despite the changes which provide some added space inside, the car is about 90 pounds lighter than the outgoing design.

Interior and Infotainment Upgrades
Inside the new ES is trending towards the GS. The second generation Lexus Remote Touch Interface is added along with the new Enform system. Enform has been upgraded to allow for more smart-phone-app driven functionality. Since the phone is the driver for the apps, and since the updates can be added wirelessly, the new Lexus system will keep up with the ever more frequent changes to the auto entertainment landscape. All of the familiar features of an in-car entertainment system can be found plus things like Bing searching, OpenTable, Pandora, Movietickets.com and other such internet-based services.

Interior appointments in the ES share some commonality with the GS, but the ES' traditional long wide dash is retained providing a bridge to the car familiar to many. Three types of surfaces are offered for seats and other components of the ES including NuLuxe, real leather, and premium semi-aniline leather.

Safety
The ES will now have a long list of safety enhancements. Lane departure alert, a rear cross traffic alert system, and an available pre-collision system improve the passive safety of the ES. Active safety systems include new Whiplash-Injury-Lessening front seats as well as driver and front passenger knee airbags.

Lexus continues to update the line and the 2013 ES350/300 is one of its most important new offerings.

Toyota's First EV Will Have a Name of BZ: Toyota BZ
First Videos From Inside The Boring Company's Las Vegas Loop
END_OF_DOCUMENT_TOKEN_TO_BE_REPLACED