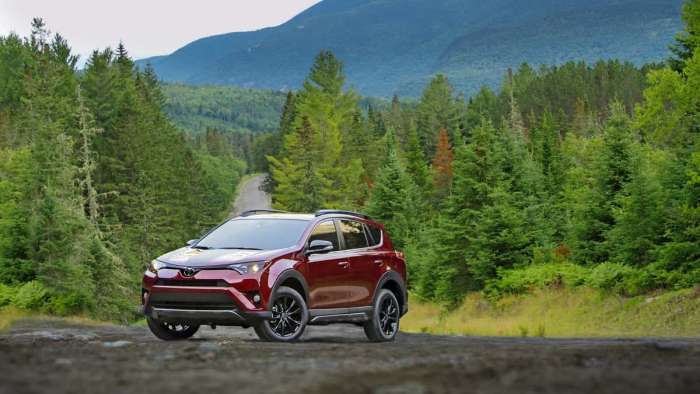 How To Research A Used Vehicle For Safety When Shopping - Honda CR-V vs. Toyota RAV4

Used cars can vary widely with regard to safety. Here is our guide to checking out the used cars you are considering. We are using the Honda CR-V and Toyota RAV4 as examples.
Advertisement

We often hear news about the latest new vehicles earning top safety ratings. But what about used vehicles? When shopping for a used car, we suggest the following guide. To highlight the differences between models, we will compare a Toyota RAV4 in some popular years to the Honda CR-V. Let's see which is rated safer using the steps we suggest.

Used Car Safety - Start at IIHS
The fastest way to obtain data about a used model you are considering is to simply use your browser to find that model and year's rating at the Insurance Institute For Highway Safety (IIHS). This is the most rigorous testing agency in America. Forget the government's NHTSA ratings. They test at lower speeds and gloss over important things like active safety aids and headlights. Almost all the cars tested get top marks, so what is the point?

IIHS has two important ratings. Top Safety Pick is the first tier of excellence. However, note that some models are only earning that rating with optional equipment. The very top tier is Top Safety Pick Plus. We suggest only buying a used car that earns one of these two ratings - in the exact trim you are thinking of buying.

Ask About Active Safety
Active safety systems like automatic emergency braking and forward collision alert are important and they have been proven to work. They add a level of safety that really won't cost you extra, so get it. Another important safety system we look for as a bonus is rear cross-traffic alert. It helps you when you are backing out of a parking space. It is real-world useful. One last tip; Please do not buy a used vehicle without a backup camera if your budget is over $5,000. We understand that low budgets can limit options. 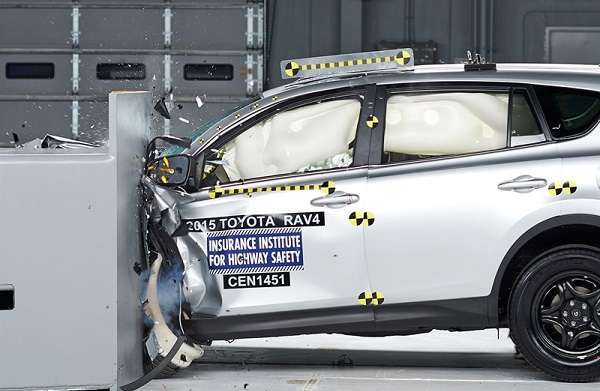 Small Frontal Overlap Testing
One very important crash test to look for is the small frontal overlap crash test. This is a test that helps evaluate a vehicle for impacts with things like utility poles and oncoming vehicles. It is one of the tests that separate the poor performers from the good ones. Let's bring in our example now. Let's look at the Honda CR-V's IIHS ratings vs. the Toyota RAV4 in year 2015. 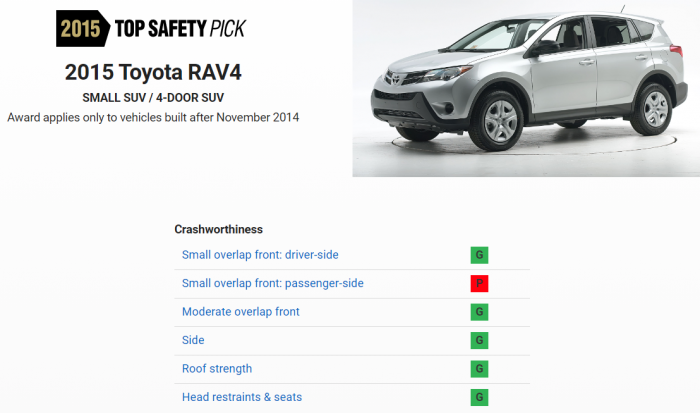 The RAV4 is a Top Safety Pick that year. That is a respectable rating and it earns our thumbs up - normally. However, look at the ratings closely and you see that the RAV4 scored the lowest rating on the passenger-side small frontal overlap test. Toyota opted not to reinforce the passenger side, just the driver's side. 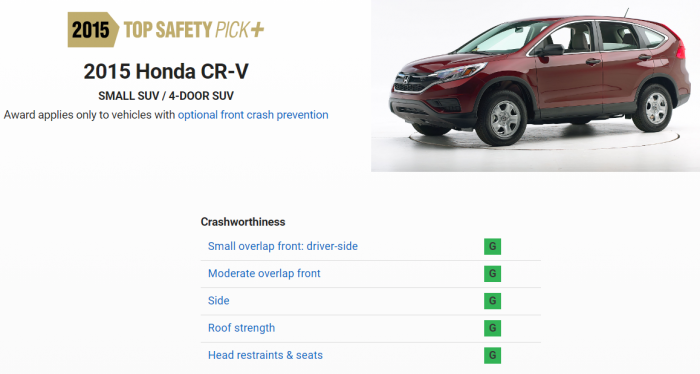 Now check out the 2015 Honda CR-V. It is a Top Safety Pick Plus. That alone puts it ahead of the 2015 Toyota RAV4. And it scores the highest possible score on all crash tests. We have found that the CR-V has an edge in safety in model year 2015.

We intentionally chose two vehicles with high ratings to compare to illustrate that even the good vehicles have differences in safety. Many vehicles do not earn a Top Safety Pick score. Choose your used car based on many factors, but always include safety as one of them. If you are shopping for a used car, tell us in the comments below how important safety is to you.

The author is not a stock analyst. John Goreham is a life-long car nut and recovering engineer. John's focus areas are technology, safety, and green vehicles. In the 1990s, he was part of a team that built a solar-electric vehicle from scratch. His was the role of battery thermal control designer. For 20 years he applied his engineering and sales talents in the high tech world and published numerous articles in technical journals such as Chemical Processing Magazine. In 2008 he retired from that career and dedicated himself to chasing his dream of being an auto writer. In addition to Torque News, John's work has appeared in print in dozens of American newspapers and he provides reviews to many vehicle shopping sites. You can follow John on Twitter, and view his credentials at Linkedin.