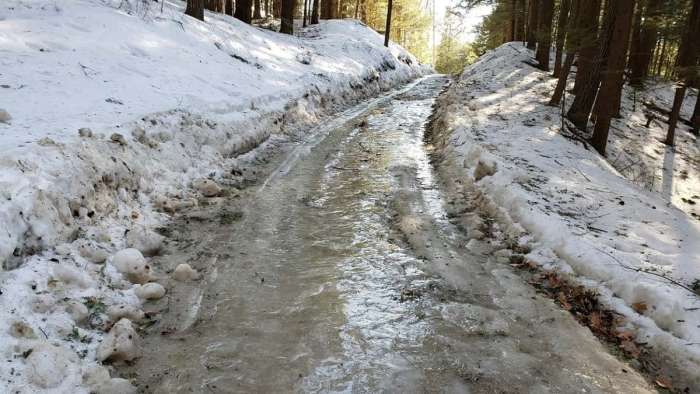 How To Know If You Need Studded Winter Tires

For the most part, studded winter snow tires have been rendered obsolete. However, there are some limited cases where studded snow tires are an advantage.
Advertisement

Winter tires have evolved since the bad old days when the same rock-hard compound found in bias-ply tires was repurposed with thicker tread lugs and sold as a “snow tire.” Nearly every aspect of modern winter tires is now different than - and better than - the old snow tires your dad bolted on the Malibu Classic every Thanksgiving weekend.

Winter Tire Compounds - Why They Matter
The compound from which modern winter tires like Michelin's X-ICE are formed now contains high levels of silica. Think sand. This compound is abrasive and clings to icy roadways. Also, sipes are now covering all of the surfaces of winter tires. Sipes do two things well. They add more biting edges to help create more friction on snow and slush. More importantly, sipes help to capture and retain snow. The snow travels around the rotation of the wheel and then comes down to contact the snow on the roadway. The general idea being that snow on snow has a better friction surface than rubber on snow alone. This is why adverts for snow-rated winter tires are often shown with snow stuck in their grooves. Unlike all-terrain tires designed to fling mud away and out of their grooves, snow tires want to hold in the snow. 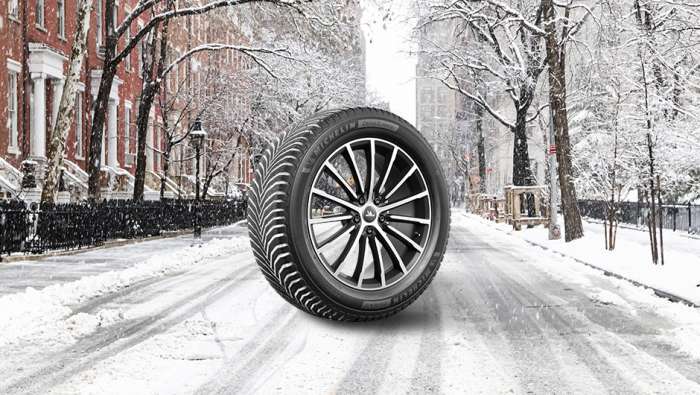 The old thinking that your deep-groove snow tires would cut through the layer of snow and contact the pavement is silly. Many snow-covered roads are never penetrated by tires. Some snow-covered roads have no pavement underneath. Under the fresh powdery snow is compacted snow, ice, or water-logged frozen dirt. Modern winter tires take an entirely different approach to how they work.

Because of the high silica compound, modern winter tires are pretty good on ice, especially on a "dry"surface mixed with snow and ice or one that is all ice that is dry. Ice is not a single thing. It takes many forms, and it has different surface friction depending on temperature and the moisture above it. Consumer Reports actually has a benchmark for ice friction that it uses when testing tires at hockey rinks. Check out our short video above that demonstrates the dramatic impact a winter compound has on stopping distances over ice.

For most folks, non-studded winter tires will be ideal for commuting, traveling to a ski resort, or driving in conditions where road crews will do their work given time. However, if you live in an area where road crews don’t regularly treat the roads, studs may be helpful. We know of some places in New England where this is the case. The top-of-page image is a rural road in New England where mixed precipitation has resulted in a thick ice sheet forming over the road. That ice sheet is in place for months. Although the residents pay to have it sanded occasionally, it is often re-surfaced with ice after fog, drizzle, sleet, frozen rain, or light rain followed by plunging temps render it a glacier once again. 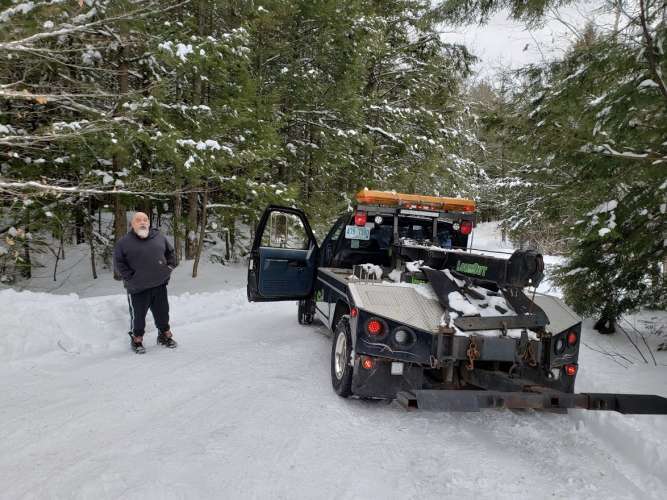 During testing this winter, we found a way to get a vehicle stuck on a private (closed) road that had only about six inches of snow atop it. The problem was an incline. Under the snow was solid ice. Our 3-peak mountain-rated winter tires, plus a locking rear differential, plus all-wheel drive, plus a high-tech trail mode were no match for this sub-surface ice. Yet, a resident with a less capable vehicle covered that stretch without difficulty because they had studded snow tires. 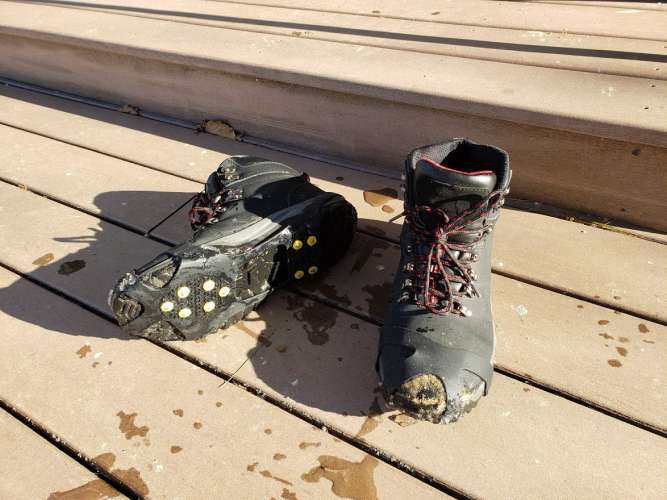 As an experiment, we purchased a set of cleats for our boots that have little studs identical to the ones in car tires. We then walked the wet ice-covered hill you see in the image with no difficulty and no slipping.

Why Not Use Studs?
There are very few scenarios where studded winter tires offer you few advantages and they have many disadvantages, including noise and the fact that not all locations allow them. If you live in an area that does allow them, and you need to travel over frozen roads without regular road crews treating those roads, you should consider studded winter tires.

Tires need to be built ready to accept studs. You can’t put them into just any winter tire. So, when shopping for your next winter tire, plan ahead if you want to add the studs. Typically, the tire retailer adds them at the time of sale.

If you have had experience with studded modern winter tires, please tell us about what you have learned in the comments below.

Bryan wrote on March 18, 2021 - 9:04pm Permalink
First off saying you used a three peak snowflake tire means almost nothing. It's the minimum rating system that just about any tire can qualify for. If you want to impress people that have brains with your hypothesis than use a really good Winter tire like a Blizzak that has been properly broken in. Anything with studs has to use a harder rubber compound or else the tire won't retain the stud. A good winter tires will easily outperform a studded tire on packed snow. The difference on pure ice is usually so small as to be unnoticed. I have rescued people with studded tires befoy. It's not the end all solution. Using the best winter tires is overall the best choice.
Dave Morse wrote on February 8, 2022 - 5:52pm Permalink
I live in rural Maine where the roads are not always the best. Have used studded snows for years. Probably the best set I have ever used is the current set of Nokian Nordsman. They are on a 98 Jeep XJ Cherokee.
Jennifer Hutchison wrote on October 20, 2022 - 12:29pm Permalink
I live in North Pole, Alaska(Just outside of Fairbanks). I bought a 08 Ford Focus coupe in 2008 . This is a front wheel drive car. This car is very dependable as I still currently drive it to and from work. my commute is 1/2 an hour drive each way, driving on curvy uphill, down hill, icy gravel and ice snow covered pavement. I buy studded tires the Hankook I pikes are my choice. Lately the winters here start with freezing rain. Then snow. When my studs wear down, I pop them out and use them for summer tires. I have been doing this since I bought the car.

Tsingshan's Threat to Tesla: EV Maker Is In Battery Crosshairs
Tesla-Funded Research Reveals One of The Biggest Mysteries of EV Battery
END_OF_DOCUMENT_TOKEN_TO_BE_REPLACED