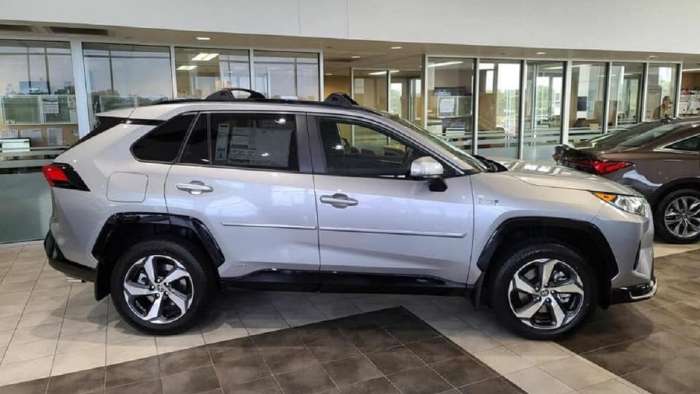 Social Media posts show that market adjustment price additions by dealers have seen an uptick due to vehicle shortages.
Advertisement

It was only a month ago that we reported many owners reporting MSRP-level pricing for the hot Toyota RAV4 Prime plug-in hybrid electric vehicle. Some new owners had even reported slightly lower than MSRP final sale prices. However, if social media posts by frustrated shoppers are any indication, popular new electric vehicles are again seeing higher than MSRP prices. The shortages of microprocessor chips reported by our own Jeff Teague along with ongoing EV battery production constraints no doubt play a role in this. 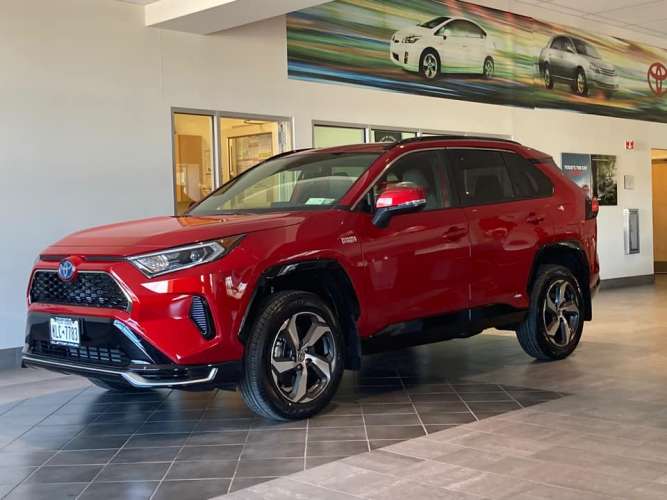 RAV4 Prime Priced $20K Above MSRP By Toyota Dealer
The first post that caught our eye was a California Toyota dealer asking $20K over the manufacturer’s suggested retail price (MSRP) for a RAV4 SE. This particular posting from May 16th took the form of a photo showing the pricing on the vehicle window. 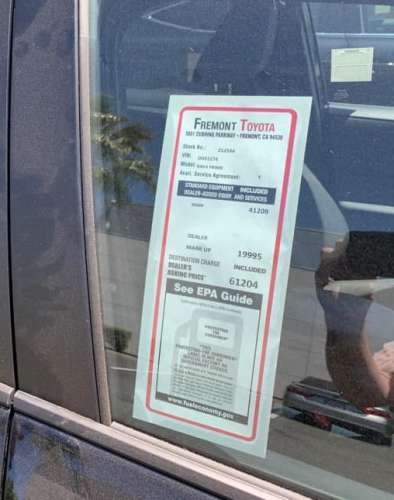 The location of this vehicle for sale is right in Tesla’s backyard, Fremont California. Join the Facebook Official Toyota RAV4 Prime Group to see the post yourself. Following the original post, one of the group's local moderators drove over to see if the markup was still in effect and grabbed the image above for Torque News to use in this story. 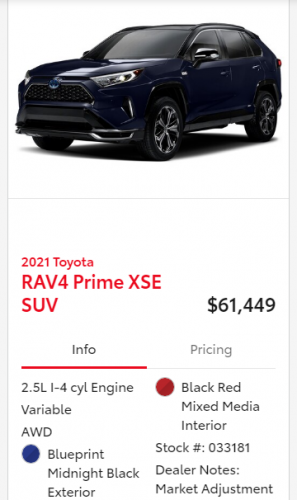 We were easily able to find examples like the one shown above on other Toyota dealer sites showing $10K markups over MSRP. Owners report that these high extra fees are primarily located in California. The EVs Californians demanded through CARB mandates have arrived and they are not cheap.

Ford Mustang Mach-E Dealer Markups
Although posts showing above MSRP pricing draw many angry-face emojis and vows in comments by some formerly loyal owners of the brand to never buy another, Toyota isn’t alone in experiencing an unprecedented demand for its new electric crossovers. Ford’s amazing Mustang Mach-E continues to demand an MSRP or higher price in many areas according to shopper posts shown in online vehicle forums.

One online post from Reddit shows a $20K markup on a Mustang Mach-E. Another from the Mustang Mach-E Nation on Facebook shows a disturbing practice. One Ford dealer appears to list the Mach-E as having an MSRP of $61,440 on its website price list. However, the actual window sticker shows the MSRP as $56,440. This seems deceptive to us. We have alerted Ford’s PR group to this example. Ford has been very proactive about dissuading its independent dealer partners from engaging in this sort of practice in the past.

No Outrage Over Discounts
When dealers offer new vehicle discounts, many as high as $10K on trucks, nobody accuses them of being unfair. When manufacturers offer incentives in the form of zero-percent financing or “cash on the dash” for models they wish to move off lots nobody cries “foul!” There are certainly two sides to this story, and Toyota’s RAV4 Prime and Ford’s Mustang Mach-E are absolutely not the first vehicles that dealers chose to sell above the manufacturers’ “suggested retail price.” However, we find this news timely given that Tesla, Ford, and Toyota cannot keep pace with the strong demand for crossover EVs while Congress and the President are concurrently crafting added EV tax incentives to “spur sales.”

Are Dealer Markups Unethical or Illegal?
What say you? Is it unethical, unlawful, or unkind for dealers to mark up popular electric vehicles well above the suggested price of the manufacturers? Or should the best vehicles of any type sell at whatever price consumers are willing to shell out? Tell us your opinion in the comments below.

Gordon Groff wrote on May 18, 2021 - 10:07pm Permalink
The price of anything is exactly what someone is willing to pay. No one is being forced to pay over msrp.
rich wrote on July 31, 2022 - 12:48pm Permalink
No, no one is forced to pay over MSRP. But we are forced to do a ton of extra work bc we are forced to purchase through a dealer. If we could just purchase directly from the mfr, we would all be able to pay MSRP without doing a bunch of legwork to find a dealer that won't charge over MSRP. Where this becomes unethical is the fact that the dealer is providing absolutely zero value for that $10k markup. This ruffles the feathers of both consumers and dealers.
rich wrote on August 1, 2022 - 12:29pm Permalink
Correction: *Ruffles the feathers of consumers and *manufacturers* The price-gouging dealers aren't bothered by it; they love it.
Dan wrote on June 12, 2021 - 8:30pm Permalink
The problem I'm seeing over and over again, is that dealers are listing their vehicles at or around MSRP on web sites, and then once they're talking numbers with the buyer, the added markup appears. They're also listing vehicles that are not available at MSRP and trying to talk people into reserving another (at the market adjusted price, of course). If not illegal, it's certainly scummy.
Eric Silvern wrote on July 15, 2021 - 8:38pm Permalink
Hello I'm glad I'm not alone in paying above msrp. I did not have luxury of waiting until prices lower due to supply. My car was totaled and I had to buy fast. So I paid a $7500 above msrp for Rav4 Prime which I greatly regret. After several hrs at dealer I was not thinking clearly and they had convinced me I would not be able to find this model anywhere. I was wrong. I'm sure if I shopped more I might of found better deal; I wish I had shopped for Honda CRv without a premium. The car is great with awesome milage but can only hold a 42 mile electric charge which goes very fast.
Gordon Groff wrote on July 16, 2021 - 10:54am Permalink
I feel the opposite. I’m thankful ever day we got our Prime when we did even with paying even more over msrp than you. It’s a pure EV most days for us and the 300+ hp is a hoot. Not even in the same ballpark as CR-V or RAV4 non Prime. I wish folks would not conflate this car with regular RAV4 or CRV. It a whole different catagory.
Jack wrote on November 17, 2021 - 2:31pm Permalink
Hello Gordon, agree, these are not the same cars. However, the price difference between the CRV and the RAV4 has already been built into the MSRP. Also, I am sure, you will get $7.5k tax rebate which will go directly to the dealer’s pocket. The government’s incentive was not meant to support“car price gouging “ and increase dealers profit by 10 to 20 times! How is this different from the food or hand sanitizer price gouging during early stage of Covid? This is price gouging, plain and simple!!!!