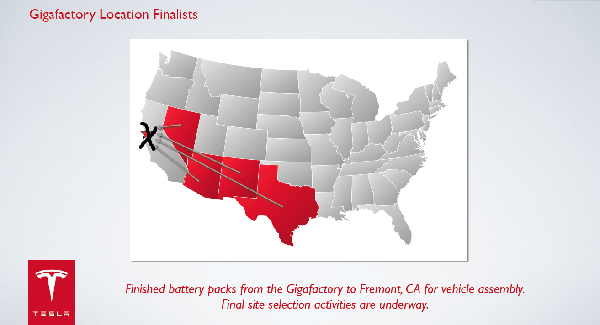 Elon Musk says that California’s environmental nonsense rules it out as a spot for the gigafactory.
Advertisement

Update - As predicted in this story, California did not win the gigafactory 1st location. On September 5th, 2014 Elon Musk announced the location would be in Nevada, which he explained, saying “[Nevada is] a really get things done state,” said Musk. “That was a really important part of the decision.” For Full Coverage we suggest these stories:
- Tesla Demanded "Massive cash up-front: and spooked California - By John Goreham
- The surprising reason Nevada was chose (it wasn't just money) - By Luke Ottaway

Elon Musk has re-affirmed his opposition to California as a site for his Gigafactory. The reason may be a shock to many electric vehicle (EV) fans. Bloomberg reports that environmental studies, study reviews, study evaluations, study summaries, and the expiration of environmental study period time frames requiring a new environmental study, would be a serious concern to Elon Musk when choosing a site for a huge new factory. We made this exact point in a story last month regarding Panasonic's cold feet over such a huge factory. Elon Musk thinks these environmental hurdles can be overcome – but not in California.

Bloomberg and the Washington Post have reported that Musk has ruled out California as a site for the Gigafactory because of excessive environmental bureaucracy. Specifically, Musk said in an interview “California has a lot of regulatory agencies, and although this will be a very green factory, we can’t have a situation where an enormous amount of data has to be processed by a regulatory agency to find no significant impact and then give us approval to proceed.”

Given 2 minutes and a crayon a talented 6th grader could make a solid case that without the State of California’s environmental bureaucracy Tesla and the entire electric vehicle resurgence as we now know it would not exist. Yes, Tesla is making the best car in the world. It happens to be electrically powered and it uses the coolest batteries on the planet. Yes, Elon Musk is a man for the ages, a genius, and a hero to all EV advocates, many of which live in the Golden State. No, Elon can’t build a manufacturing plant there. In his mind it just doesn’t make sense given all the environmental rigmarole.

Environmental rigmarole is one of California’s main exports. The California Air Resources Board, and other similar, duplicative agencies in California, are the only reason that the RAV 4 EV, Fit EV, Fiat 500 EV, and many other electric cars exist. This is not an original thought on my part. EV advocates call these cars “compliance cars.” They only comply with one state’s mandates - California’s. It is hard to blame California for taking action. Los Angeles and the Central Valley of California suffer from the worst air pollution in the whole country.

Tesla benefits directly and enormously from California’s Zero Emissions Vehicle Credit sales. On the order of many tens of millions of dollars in revenue to Tesla last year came from the exchange invented by California’s environmental agencies. Tesla also benefits in so many ways immeasurable by the movement created by California’s environmental regulation of the auto industry. The expression “biting the hand that feeds you” could not be a better fit here.

Tesla isn’t alone in looking to move away from California as a place in which to do more business. Toyota, the world’s largest automaker, the US’ largest retail supplier of automobiles, and the company that makes the number one car sold in California (Prius), announced this very week it is bailing out of California and is moving its US headquarters, and much of its other operations, out of the state. To Texas, in case you are wondering. But Tesla? Yes, Tesla also lists Texas as a possible gigafactory site.

Elon Musk saying that he can’t build a massive factory in California because of the environmental hassles reminds me a lot of Don Draper’s missive explaining why he can’t promote the use of tobacco anymore. Hopefully Elon and Tesla won’t suffer the same consequences.