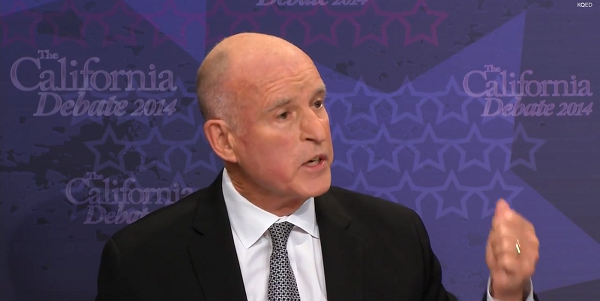 According to Governor Jerry Brown, Tesla’s demands on taxpayers were too much even for California. Apparently, the cost to taxpayers to have a battery factory is about $1.3 billion.
Advertisement

Last night there was a gubernatorial debate in California during which the Tesla Gigafactory came up. The present governor, Jerry Brown, said “it is pretty clear what happened.” He and the state “fought hard for Tesla.” This was in the context of the new factory. Expanding on that topic, he explained that although the state tried to come to an agreement get Tesla’s new battery factory built in California, “Tesla wanted a massive, cash, up-front payment.” Governor Brown said he did not think that would be fair to the taxpayers of California and said “We wish’em well.”

The Governor did point out that the Freemont California Tesla car plant has “Cars comin’ off the line every day.” His point is valid, though for at least two weeks in the past month or so no cars came off that production line. Inside EVs estimates Tesla has built a very limited number of cars in August as the production facility is updated and prepared for the company’s third vehicle, the X sport utility vehicle.

The Tesla battery factory will be built in Reno, Nevada. You can read more on that here. As our green cars reporter Luke Ottaway explained in the link just mentioned, the State of Nevada and local elected officials offered Tesla $1.3 billion to come to the Reno area. However, it was the state's willingness to get the job done that mattered more. Our prediction back in April that California's overbearing environmental bureaucracy would rule it out as a winning site was spot-on.

Large State and Local Incentives Are Not Unusual For Car Companies
If the fact that Tesla asked the taxpayers of California for a “Massive, cash, up-front payment” surprises you, you are not following the wonderful world of automaker musical chairs. Automakers get sweetheart deals from, not just the states they locate in, but also from the local cities or towns. Recently, it was reported that North Carolina offered Toyota $100 million to come to its sate when it decided to flee the ridiculous tax burdens place on it by the state of California. Toyota turned down North Carolina, which has a 6% corporate earnings tax, and instead went to Texas, which has no corporate tax. Details on that story were covered by Torque News this past week.

To keep things in perspective, it should be remembered that the bailout of General Motors ultimately cost the US taxpayers over $10 billion.

Taxpayer-Funded Electric Car Factories Have Mixed Results
Like all businesses, there is risk. Electric luxury car maker Fisker proved that. The US taxpayers lost $139 million on that boondoggle and much of the benefits went to millionaires. That was not the worst of that story though. Delaware's taxpayers footed the bill for Fisker's plant costs even after it was pretty clear the company was doomed.

How Jerry Brown Came To Expose the Massive Cash Payment Demand By Tesla
The republican challenger was posed the topic by the moderator. It was not initially brought up by the challenger. The basic question was, “did California do enough to get the Tesla factory?” The challenger replied “I don’t think Governor Brown did nearly enough on Tesla or any number of businesses.” By that, he seems to mean that the Governor did not eliminate current environmental standards, nor did the governor offer a large enough taxpayer-paid bribe (subsidy, hand-out, corporate welfare fund, call it whatever you prefer) to have Tesla build its new factory in the state.

The Republican challenger also pointed out that Toyota is moving its HQ out of the state, along with Schwab, Nestle and others.

You can see the full debate, which had excellent dialogue on climate change, renewable energy, clean water, and zero emission vehicles at the link below. If you wish to jump directly to the Tesla part, start it at time stamp 9:45.

Related Stories:
Our Prediction from April that California would not win this business
BMW’s i3 just the latest EV to blow past Tesla in US sales
Which automaker sells the second-most plug-in vehicles in the U.S.?

Matthew wrote on September 5, 2014 - 12:31pm Permalink
I could understand why Tesla would need a lot of cash up front to build anything further in California; the regulatory and tax environment there makes it insanely difficult to establish or grow a business that makes anything other than bits-and-bytes. Plus, Tesla still doesn't make any money, really, so they need cash flow, even after claiming $300M+ in carbon credits. As a NV resident and business owner, I'm cautious that we offered them $1B in tax breaks over a decade. That's easy money, compared to the jobs and economic stimulus they will generate in the state. Adding 5000 jobs to the state's economy, plus the ancillary services that will generate, is a good investment of the public fisc. On the other hand, it's risky, though, and I would have preferred investing in a sustainable company that knew how to turn a profit (not just a so-called environmentally sustainable product). At the end of the day, however, the real story is about the competitive difference between competing philosophies of governance. High tax and regulation states continue to lose growth and jobs and revenue to less burdensome states; not unlike the bigger picture where companies like Burger King are "inverting" their ownership out of America to escape globally non-competitive federal tax and regulatory burdens. Imagine one day seeing more companies around the world investing in America's competitive tax localities, if only politicians could take a class in lemonade-stand economics….
Aaron Turpen wrote on September 5, 2014 - 4:48pm Permalink
The money demands are a sad statement about political affairs in this country. The fact that states can control so much about their economies and are required to basically bid against one another for business says a lot more about the oversized power of government than it does anything else.