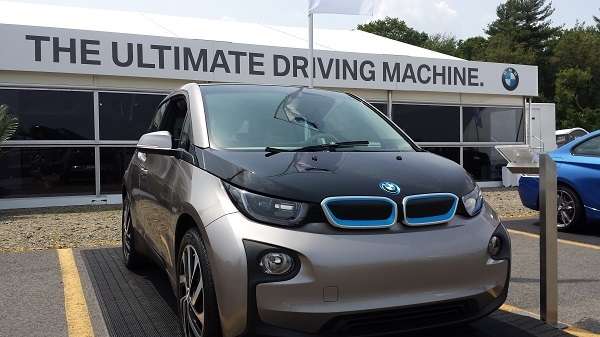 Despite the media and fan-boy hype, Tesla has dropped to 5th in monthly US electric vehicle sales rate. This time, the car to pass it is indeed stealing customers from the Tesla Model S' target demographic.
Advertisement

In the month of August BMW’s new i3 electric vehicle (EV) passed the Tesla Model S in US sales. One year ago Tesla was one of the top-selling EVs in the country. It has now dropped to 5th in year to date US EV sales. BMW, on the other hand introduced its i3 to the US market just four months ago. After its initial ramp up, it hit its stride this month and nearly doubled the sales rate of the Tesla Model S.

Tesla Model S and BMW i3 Sales Numbers
Inside EVs reports that Tesla sold about 600 cars in the US in August. Tesla tries as hard as possible to never let anyone know exactly how many cars it ships. However, the author of Inside EVs’ monthly report has been spot-on most months, and he goes back after Tesla is forced by law to reveal its shipments and makes minor adjustments to his tally. He is an EV advocate, so we have no reason to doubt his estimates.

BMW sold 1,025 i3 EVs in August. That is a very respectable number as EVs go, and the ramp by BMW has been at least as fast as the Leaf, Volt, or Model S. After a few months of sales in the mid-300s, the i3 campaign finally hit its stride. Like the Tesla launch, BMW has a large back-log of customer pre-orders to fill. It is hard to guess how the overall sales figures will end up for BMW, but for now it seems that people with money in their hands wanting an i3 is not a problem. Torque News did a poll and discovered that a large percentage of i3 buyers have owned one or even two EVs before. They consider the i3 a step up to a premium EV. That was Tesla's exclusive domain until about 4 months ago.

Want to see more exclusive BMW i3 Photos? Here they are!

Tesla Smoke and Mirrors
Tesla has grand plans, and this month will announce its giga-plant location. As of this writing, unconfirmed reports place it in Reno. The giga-factory is the “all-eggs-in-one-basket” manufacturing site at which Tesla plans to make batteries for electric vehicles on a large scale. Depending upon which news report, or fan-boy blogger you read, in two years Tesla will either be cornering the market on mid-size cars in the US or it will finishing the drywall on the Gigafactory. I have a feeling that any third model from Tesla will take longer than 24 months from now to begin any meaningful production.

In the meantime, Tesla’s long-delayed second model (or third if you count the Roadster), the X sport utility vehicle is now just about to launch. Tesla fans blamed the company’s ridiculously-low 500 units or so of July sales on the switchover shut-down that took about two weeks according Tesla. Now they will again blame a 9th week of nearly no sales on that reason, or say the cars are being sold elsewhere. Who cares? Every automaker sells globally, but the fact is that the US accounts for half of the planet’s EV sales. If you are not leading here, you are not leading.

BMW i3 Launch Challenges
To say that the elecronauts who stepped up to be born electric first and take the BMW i3 before the paint dried have suffered is an understatement. Check engine lights, myriad small issues, shortages of common replacement parts like windshields and tires, and the company’s first US recall of the i3 (for exactly 1 US car according to one source), have filled the screens of the i3 clubs and forums. Through it all, most owners remain completely psyched by the new vehicle. I see why. When I drove the i3, it was a revelation second only to the one I had after driving the Model S. These EVs work.

Leaf, Volt, Prius, Fusion Now Mainstream
Originally, Tesla was a EV kit-car converter of Lotus Elises. Then it was a super-car maker of large premium sports sedans. Along the way, or from the start, its founder and disciples decided that its main purpose was to bring EVs to the masses and create an affordable, mainstream EV that many people would want to buy at a reasonable price. That ship has sailed. The Nissan Leaf is now maintaining consistent sales in the low thousands per month, the Toyota Prius Plug-in is trading places with the Volt for second, and the Ford Fusion is coming close to breaking into the party.

Amid all the joyous announcements about laboratory breakthroughs that will make EVs more practical than gasoline cars, and amid the vapor-ware announcements about new Tesla models as yet unseen, there remains one truth. By the end of this year, there could very well be four companies consistently selling EVs in numbers higher than most of Volkswagen and Mazda’s gasoline powered models. Based on the sales numbers, it does not look like Tesla has two years to impress the US market with a practically-priced everyman’s EV. It may not have six months.