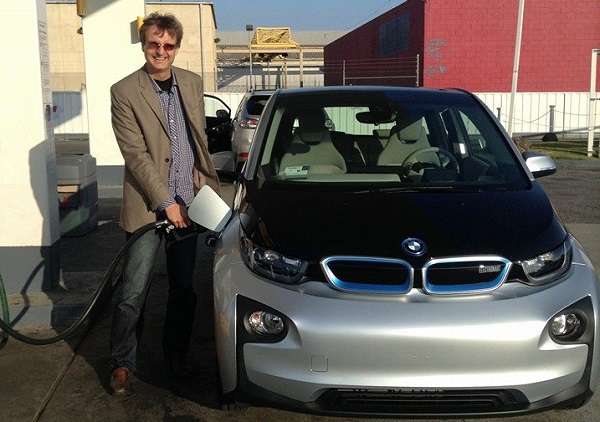 BMW i3 REx owners are reporting that their range extenders are permitting more EV trips than they would have done otherwise. We love stories about EVs that defy the conventional wisdom.
Advertisement

New owners of the BMW i3 with a range extender, called the REx, are reporting an interesting new trend. They are reporting that the gasoline powered range extender in their electric car is enabling them to travel many more miles on electric power alone than they would have been able to if the car were purely electric. The people reporting this are not internal combustion engine (ICE) car drivers who grudgingly chose an EV for purely economic reasons. These are some of the most outspoken advocates of electric automobiles in America.

This may seem odd at first. How can a car with a gasoline engine make an EV go further on its charge of electricity? It doesn’t. However, what it does do is give owners the confidence to drive their EV up to, and past, the full electric range. This has profound implications for those wishing to reduce the amount of gasoline used in the US.

A little bit of background to this story is found in our recent stories highlighting the fact that sales of electric vehicles with some form of range extender (PHEV, EREVs, etc.) are now outpacing battery electric vehicle sales (BEVs). In fact, although the data is still just coming in, the BMW i3 seems to a perfect mirror of the overall industry in that regard.

Scenario One – Closest Recharge Is Just Out Of Range
Imagine a trip that one would like to take in their EV, but which would be a few miles past their maximum range on battery power. The battery electric (BEV), pure electric vehicle, owner has choice. Take the EV and try to find a charge along the way, or take an ICE car. The Rex owner can just go for it. Their range extender may kick in and use a few sips of gasoline, but that is surely better than taking an ICE car isn’t it?

This situation can also be one of convenience. Imagine an EV owner who is making a trip that requires an on-time arrival at or near their maximum range. Stopping for a charge might be an option, but at what cost in time? Why not push the REx and use some gas if needed. Maybe you will get lucky and not need to use the range extender? Stopping to charge may take longer than the time allowed and again, this is better than driving the other car in the stable is it not?

Scenario Two – Charger Off-Line
The day this story was written an owner reported in the Facebook i3 club that they arrived at a charging location they were counting on only to find a local yahoo in an ICE car had been doing donuts in the parking lot and knocked over the charge station. Many EV drivers report that the spots are sometimes taken by ICE cars. Now what would an EV driver do? In a BEV he scrambles to find another location. In a REx he drives on and charges when convenient.

What Do Real Owners Say
George Betak, an electric vehicle writer and EV advocate, recently said in an i3 club post about a long road trip he took, “220 miles so far. About 2 gallons of gas consumed and 70 miles driven in range extended mode. The Rex rocks, at least in our experience.” In another post, he and others were having a dialogue on the benefits of the range extender where charging points are spotty and said “Some of these trips would be simply too tiresome to attempt, and the other alternative in most cases is a gas car or a lesser plugin hybrid. So in that sense, the i3 REx is facilitating longer journeys, and more EV miles. We could have driven more total EV miles that day, but the charging stations we wanted to use were either busy or unavailable.” George and fellow owners have said that the number and availability of the charging stations they would like to use is a “gating factor” to fleet EV miles that could be travelled. The REx solves this issue.

Similarly, an owner named Krishnamurty Kambhampati commented about using the i3’s range extender to allow for EV miles travelled saying, “1000 awesome miles on the i3!. I have consumed about eight REx miles. If I did not have the REx I would have done at least 200-300 ICE miles as I would have opted to ICE the trip. This ratio will change as cooler temps come later this year. Rex was a good choice for my use.”

Scenario Three – The Unexpected Journey
Another i3 Rex owner gave us another scenario where a range extender might add EV miles. Alex Lee had just arrived at work when a co-worker said they needed to head right out of the office. Alex had been letting his his i3 REx’ battery drain because it was headed in for service. Without the range extender he would not have been able to take his car on the business call. They were able to hop in the range-extended i3 due to its capability of continuing on after the charge ran out. Alex said “This was my first experience to use the on board range extender engine. It worked out great!”

What Do BEV Owners Think?
It is not uncommon to see negative comments posted under stories about electric vehicles with some form of range extender authored by “pure” electric battery electric vehicle advocates. If you doubt this, please read David Murray’s article in Inside Evs in which he recounts a first-hand insult delivered to him by a fancy BEV owner about his Volt. The irony is that people who share this BEV driver’s attitude about range extenders may be influencing buying decisions in a way that reduces electric miles driven.

Marketing works and some automakers have been trying to plead their case about the possible benefits of PHEVs. Toyota recently ran the Nurburgring in a Prius Plug-in. Over the 12.9 miles of the course, the car used 5 tablespoons of gasoline. The stunt was surely intended to show the car could make the trip on its battery alone. Instead, it highlighted perfectly how PHEVs can embolden EV owners to really push their vehicles to the limits of the electric car’s limited all-electric capabilities, while not worrying about finishing the journey. At the end of the day is the objective more electric miles driven, or not? If you are an EV owner or future owner, we’d love to have your feedback.

The author received permission to use the full name of those mentioned in the story.