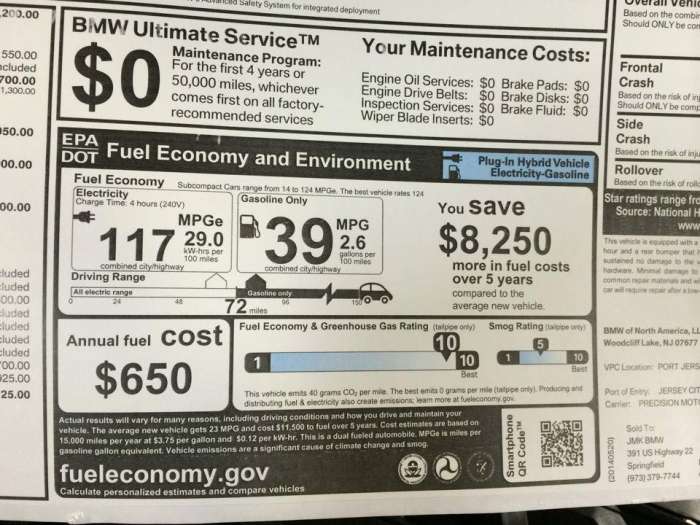 BMW i3 least expensive EV to maintain in America

The new BMW i3 will save owners money due to a very low cost of maintenance, something not all popular EVs can offer.
Advertisement

The BMW i3 is the least expensive electrified vehicle to maintain for sale or lease in the US marketplace. BMW has started to ship cars to customers over the past week and the Monroney stickers confirm that BMW Ultimate Service, which covers all the maintenance costs of the vehicle through the first 50K miles and 4 years, is part of the purchase price.

Currently, the only electrified vehicles in the US market that sustain a sales rate of over 1,000 units per month are the Nissan Leaf, the Toyota Prius Plug-In, Chevy Volt, and the Tesla Model S. As we said in our recent driving impressions story in the i3, we suspect that this new BMW will attain this rate or greater within a year after it ramps up fully. Feel free to look at maintenance costs of the other EVs for sale or lease, but they represent such a tiny fraction of a single percent of the car market in the US, we won’t bother for this analysis.

One very attractive feature of cars that are only electric, or primarily electric, is that the maintenance cost can be less than that of an internal combustion vehicle (ICE). How true this is depends on the matchup you choose. We recently did a story called “Myth busted - Electric vehicles cost more to maintain than gas cars do.” The story compared maintenance costs of the two top selling EV models, the Nissan Leaf, and Tesla Model S, to their closest gasoline-powered counterparts over the first 5 years of ownership. Electric vehicle fans did not like the results one bit and gave us a wealth of commentary to consider (respectfully).

Comparing only vehicles with a plug to one another is a little easier, though still not entirely straight-forward. BMW includes the maintenance cost of its new i3 for four years or 50,000 miles. Over the first five years it is safe to say the i3 is the winner unless things change. Toyota offers no-cost maintenance on all its cars for two years or 24,000 miles. We predict that the Prius Plug-In hybrid will have the second lowest maintenance cost over the first 5 years, but will then drop down to 4rth for subsequent years. Nissan has published its maintenance plan, which we detailed in our prior story, so we have a guideline for that vehicle as well as Consumer Reports' reporting of what it actually paid to maintain its Leaf. The Volt is mostly maintenance free except 2 oil changes, checks and tire rotations over the first 5 years. Based on a Motor Trend test , which revealed the cost of an ail change and rotation to be $127.00, we guesstimate the Volt will be third behind the BMW i3 and Prius Plug-In over 5 years, but it will be close to the Prius.

Tesla makes a mess of things. It does charge customers for service at its annual intervals – usually. Owners have reported paying $600 for the non-tire related maintenance that the company performed. Separately, Tesla does also sell maintenance plans. Five years of maintenance according to Tesla’s website costs $2,500 not including the cost of a Tesla Ranger, which adds $100 more per visit. The reason we say the company has made a mess of things is that it also says that the warranty on the vehicle is not affected by whether a customer does the recommended maintenance or not. Owners debate what this means. Some buy the maintenance. Some lucky ducks seem to get it for free when they visit for other things like the recent issue over the battery shield. Some owners say that they have not done or paid for the maintenance on general principle. Given the choice of two identical used Model S cars for sale in the future, one would assume that the car with a full maintenance record completed by Tesla would be of some higher value to buyers.

Kudos to BMW for finally making the electric vehicle lower in maintenance cost than an internal combustion engine car. Our opinion is that Nissan, Chevy, and Tesla could have done a better job rolling that moderate cost into their cars’ price, as so many brands now do to one degree or another.

Photo taken by i3 expert Tom Moloughney and used with his permission.

Weapon wrote on May 21, 2014 - 4:10pm Permalink
Makes no sense though, what maintenance costs? You can easily offer free maintenance when there is no maintenance. Other then obviously the tires.
John Goreham wrote on May 21, 2014 - 5:31pm Permalink
Yes, many EV advocates and fans think that these machines do not require any maintenance. Hence my stories on the subject. Check out the link to the Myth busted... story for more details, but Consumer Reports and other sources show a two-year cost of about $600 for the Leaf in areas like the northeast and in dusty areas like the southwest. Here is a short list for that car: "brake fluid will have been changed twice, 33 inspections would have been performed, the cabin air filter replaced twice, and the tires rotated 4 times." - - There is a link to the Tesla site which states "Tesla Service is important to keep your Tesla properly maintained. Prices are for North American customers only, do not include sales tax, and are subject to change without notice." - - There is a link to the Volt maintenance cost as well. - -Maybe the car makers are just stealing form their owners. If they are it is pretty universal.
Carola wrote on April 20, 2018 - 10:30am Permalink
I just came from BMW of Pembroke Pines and they try to charge me $600 for the service of my 11000 miles I3 how is this cheap ?????
George Mattei wrote on May 21, 2014 - 4:55pm Permalink
Great i3 article.
Charlotte Omoto wrote on May 22, 2014 - 1:16am Permalink
I don't understand why you keep on pounding on this idea about maintenance. As I said on previous posts, Tesla warranty holds even without the recommended annual service. I recently had the titanium undershield installed, and on that occasion, they did all the routine maintenance, including rotating tires, topping off windshield wiper fluid, without cost. I understand that almost 50% of Tesla owners do not purchase the service package.
John Goreham wrote on May 22, 2014 - 8:56am Permalink
I think the story covered that exact point in the story in the middle of the fifth paragraph. If almost 50% don't buy the maintenance, then more than half do? Is that logical? Is it not fair to point out a positive aspect of a new vehicle (i3)?
Charlotte Omoto wrote on May 22, 2014 - 12:43pm Permalink
I think the title of the article is very misleading.
R D Pendery wrote on May 28, 2014 - 4:06pm Permalink
For 24,000 miles or two years Chevy provides free tire rotation and oil changes on all 2014 Volts... I see the cost of maintenance as a non-issue on a Volt.... After 24,000 miles, the cost of an oil change is minimal.... And in fact most dealers in our area provide free oil changes anyways... Also the Volt EPA range is 38, not 35.... So the round trio tether range on a Volt is about 19 miles (Out and back).... The I3, with range extender, is about 35 miles.... I can not image that the 600cc engine will provide enough energy to keep the I3 up to highway speeds when climbing a hill.... So if 100 % of your driving is within 35 miles of home go with the I3.... If you plan to use your EV on occasional 100 mile trips go with the VOLT....That's my take
John Goreham wrote on May 28, 2014 - 5:09pm Permalink
Thanks for the update on the Volt. it is a good value. I looked and could not find included maintenance on the Volt site. I should have looked harder. Not sure what you are getting at with the i3 range and power. Users are reporting excellent power with the Range Extender in effect and the EV-only range reported by US users this week (first week in use) is more than what you say above. Did I mention the Volt's EPA range in the story?