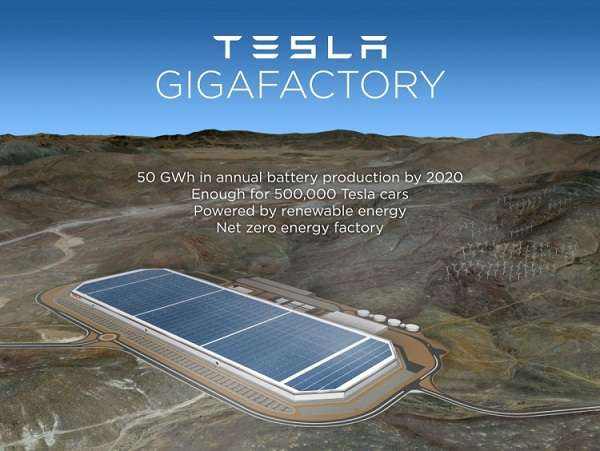 Nevada offers Tesla $1.3 billion in Gigafactory incentives – but that’s not why it won

The economic incentive package dangled in front of Tesla for constructing the Gigafactory in Reno, Nevada is more generous than many expected. Yet there is another more important reason Nevada was chosen.
Advertisement

It is official: Tesla’s fabled Gigafactory, the massive battery facility necessary for the high-volume production of future Tesla vehicles, will be built in Reno, Nevada, on a large site in the Tahoe-Reno Industrial Complex. The announcement was made at a news conference yesterday in Carson City, Nevada.

On Thursday after the news was first leaked we reported why Reno was the right choice for Tesla. The main reasons we cited: proximity to Tesla’s Fremont assembly plant with easy rail access, Nevada’s solar and wind resources and commitment to sustainable energy, and what was expected to be a generous tax incentive package.

Interestingly, we now know that the incentives Nevada offered were even more than Tesla had publicly indicated to be asking for – though $500 million had been the company line, Tesla is reportedly working out a deal with Nevada for nearly $1.3 billion in various incentives spread out over 20 years. The agreement will still have to be approved by the state legislature.

The breakdown goes like this, per the Reno Gazette Journal:

I’m no economist, but that is quite a lot of money almost exclusively tax-related. Tesla reportedly demanded a “massive, cash, up-front payment” from California, according to Governor Jerry Brown.

Of course, the Gigafactory will inject a great deal more back into the state economy over its operational life. Economic development officials expect the battery facility to generate $100 billion over the 20-year duration of the proposed incentive package.

"What this can do for the region… It will allow every under employed person to reach full employment," said Steve Hill, Sandoval's economic development director. "It will lift up everyone in the region. Property values will go up. The prosperity of the region will be materially changed."

More details on the economic impact can be found in this article by the Reno Gazette Journal.

The most important reason Nevada won the Gigafactory

The other competing states (Arizona, California, New Mexico, and Texas) surely offered enticing incentive packages as well. Tesla CEO Elon Musk confirmed that Nevada didn’t provide the biggest economic reward – “This is not just about the incentives,” he said.

What, then, was the deciding factor for Nevada?

In a word: speed. Tesla needs this factory to be up and running as soon as possible, and it cannot afford delays; any setback in Gigafactory construction will equally delay the mass-market Model 3 sedan that the company’s future hinges on.

To that end, it seems that Tesla has had the fewest red-tape problems in Nevada. The Reno site was notably ahead of any other potential locations, as it was the only one reported to have completed (or even begun) the ground-breaking stage. Tesla got the permitting process largely out of the way quickly, and though work remains to be done, it appears that construction will recommence soon.

“[Nevada is] a really get things done state,” said Musk. “That was a really important part of the decision.” Translation: we need this facility operational by 2017 at the latest, and Nevada gives us the best chance to accomplish that. Musk even suggested the Gigafactory could be completed in late 2016 if things proceed according to plan.

At last, an end to the speculation

We can finally stop speculating about the whereabouts of the Gigafactory and start following its progress as it enters the construction phase. If all goes well, it will be completed well in time for Model 3 to roll off the assembly lines sometime in 2017.

We will leave you with this quote from Musk:

“The Gigafactory is an important step in advancing the cause of sustainable transportation and will enable the mass production of compelling electric vehicles for decades to come. Together with Panasonic and other partners, we look forward to realizing the full potential of this project.”

Aaron Turpen wrote on September 5, 2014 - 4:49pm Permalink
How this translates into actual English: the state of Nevada promises not to rape Tesla (er.. tax them) for a period of time in return for Tesla opening their business in Nevada.
Weapon wrote on September 5, 2014 - 5:35pm Permalink
I don't think it is a lot of money when you look at the overall picture. If you look at other deals, this deal falls in average in the auto industry. I mean look: 1.28 billion / 6500 workers = 196,923$ per worker. And Tesla Invests 5 billion Now let us compare other deals from other automakers. In 2008, TN gave VW a deal for 580 million for 3200 workers and 1 billion to build the factory. 580 million / 3200 workers = 181,250$ per worker Factor in inflation of 2008 vs 2014, 200,567$ per worker So the deal is actually pretty standard in the industry. On a side note, when will Torque news finally allow new lines in text so we can format things neatly intp paragraphs?
Aaron Turpen wrote on September 8, 2014 - 2:39pm Permalink
"Standard" doesn't mean "right."