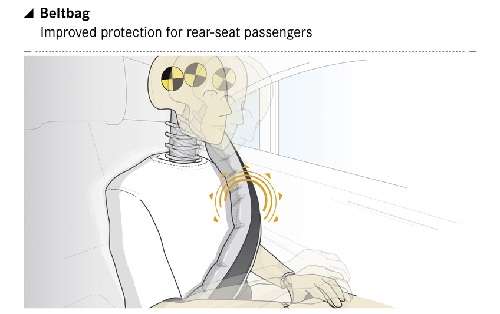 Mercedes rear seat belt bag makes us wonder if the automakers are past the point of diminishing returns.
Advertisement

Mercedes has announced in a press release that it will start to include the shoulder belt airbag in one of its “luxury” models soon (aren't they all?) Are wealthy businessmen riding in the back of SL’s dying in the streets? Has there even been a recorded case of person being killed in the back of a full size Mercedes while belted? As a father and citizen, this writer is all about safety. As a mechanical engineer and lifelong student of all things automotive, this writer would not buy a vehicle without modern life-saving safety equipment. The reality is however, that in the past five years, despite a huge roll-out of new gadgets, cameras, self-driving systems, and amazing new doo-dads, none of them seem to be saving anyone. Worse, they are starting to cloud our judgment of what actually does save lives and prevent accidents in the first place. A recent NHTSA study points out that many new systems don’t show any improvements in lives saved.

In its press statement Mercedes hints as to who the belts are designed to save. The company says that in emerging markets rear seat occupancy of its luxury models is as high is 30 percent. That is much higher than in the US and in Europe. Reading between the lines, it seems that by using the term luxury model we are talking about primarily the S class limo and the E class executive sedans. Wealthy moms with kids to haul around use sport utes from Mercedes, not sedans. By using the phrase "emerging markets" Mercedes means China. So in translation: This belt bag is designed to protect the life of a Chinese business person riding in the back of a S class limo in the event the car is involved in a head on collision.

Sadly, and we state this without any sarcasm, we all learned that the back of a full-size luxury sedan is not always a guarantee. When Lady Di perished in a senseless crash that was primarily the result of adriver who had apparently been drinking, it highlighted that if you don’t wear your seatbelt all the safety stuff matters very little. She and her companion did not survive the wreck. The front seat passenger, who was in the worst spot given the nature of the impact, was wearing his seatbelt and he lived. If Mercedes really wanted to save lives in the back of limos all it needs to do is put an interlock on the car that causes an unbearable chime if the rear seat passenger is unbuckled. Here in the US this writer has had the displeasure of being in limos, mainly Lincoln Town Cars used as airport shuttles, that had the seatbelts buried in the seat cracks. Clearly they are not used.

Mercedes and other automakers are doing the right thing by researching ways to save lives. However, they need to keep it real and bring to market the systems that really help.

RNJ wrote on July 27, 2012 - 1:32pm Permalink
While riding in, or driving a car, I am also, "all about safety." I admit, though, that my attitude seems to change when I get into a limo or even a taxi. I can't explain it, but I don't even pull out of my garage without my seatbelt, but I'll ride all over Manhattan in the back seat of a bobbing-and-weaving cab without my seatbelt. On the other hand, I sometimes wonder if the increases in safety equipment has a tendency to make us feel invulnerable, thus encouraging us to take risks that we would not have taken in that 1967 Impala 2-Door that we drove in high school.