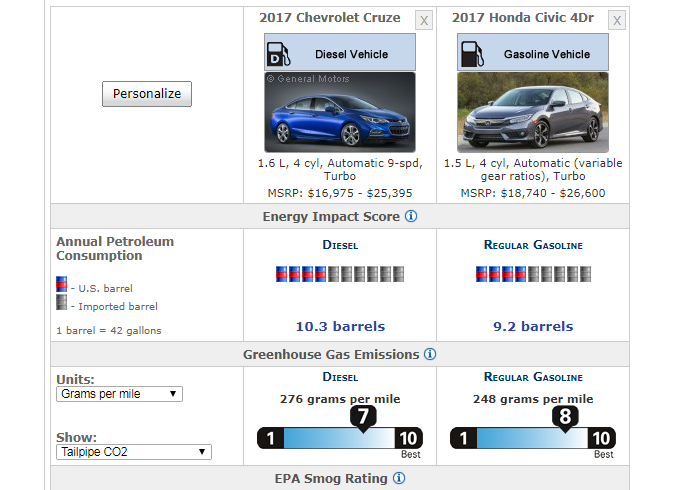 Modern gasoline engines surpass diesels in petroleum efficiency, performance, and offer lower CO2 production, as a comparison between the 2017 Honda Civic and Chevy Cruze diesel illustrates. Despite automakers claims to the contrary, gasoline engines in comparable cars produce less CO2 than do diesel engines and beat them in every other measurable way. The 2017 Model year offers just one example of an economical diesel-equipped "compact" car, the Chevy Cruze. The models offered by Volkswagen having been pulled from the market due to dirty-diesel emissions cheating.

Diesel vs. Gas - Drivability and Performance
In his recent review of the Cruze diesel, Torque News editor and contributor found much to like. One of the four main reasons Rall loved the Cruze diesel was its performance. In the past, diesel engine economy cars had an edge over the mostly normally-aspirated (non-turbo) economy car engines they competed with.

Things have changed. Cars like the new Honda Civic exemplify how far gasoline engines with small displacements and turbocharging done right have come. We've tested the new Civic and love it. However, opinions aside, the Civic is faster than the Cruze diesel. Chevy states the Cruze diesel can run from 0-60 MPH in 7.7 seconds. Honda does not offer 0-60 MPH times, but multiple instrumentation tests by respected outlets like MotorTrend reveal the Civic can do the same sprint in about 7.2 seconds. The drivability is also excellent in the new Civic with low-end torque being plentiful. Our own Parks McCants put it this way in his test of the Civic, saying "The turbocharged 4-cylinder when coupled with Honda’s CVT automatic, comes on from 1800 rpm and pulls like a freight train." Having also tested the Civic, I concur with Parks' report that the torque of the Civic comes on strong in the low RPM ranges, exactly like diesel engines are known for doing.

Diesel vs. Gas - Petroleum Efficiency and Fuel Costs
Fuel economy is just one way to measure the efficiency of a vehicle. The Civic beats the Cruz diesel in two ways. First, with regard to annual petroleum used. Diesel fans don't like to hear it, but it takes more crude oil to produce a gallon of diesel than it does a gallon of gasoline. Rather than go into an explanation of why that is, we prefer to just look at the annual petroleum usage number the EPA generates. As the chart above shows, the Civic uses 11% less petroleum than does the Chevy Cruze.

The second way the Civic demonstrates its better fuel economy is with regard to fuel costs. Using country-wide average prices, which it updates frequently, the EPA calculates that the Civic uses $50 less fuel each year than does the Cruze diesel. With diesel costing more to run and using more petroleum, it is hard to see the point in the fuel.

Diesel vs. Gas - CO2 Generation
Diesel advocates often state incorrectly that diesel cars generate less CO2 per mile. How they came to this erroneous conclusion is a real head-scratcher. The EPA lists the CO2 emissions for every US-legal vehicle. The Civic generates 11% less CO2 than does the Cruze diesel. We've pointed this out in many previous articles, yet it is still not that uncommon to hear an automotive writer repeat the incorrect assumption that diesels produce less CO2 per mile.

Conclusion - Gasoline Bests Diesel In Every Meaningful Way
As our comparison illustrates, when comparable cars are viewed side by side, the segment leading gasoline engines top the segment leading diesel cars (in this case car singular). Gasoline cars offer strong low-end torque like diesels, and have the same great drivability, but are faster. Gasoline cars use less petroleum than do diesel cars, and offer lower fuel costs. Finally, CO2 production is lower in gasoline cars than in diesel cars. Across the board, the best gasoline engine equipped cars top the best diesel engine equipped cars in every important way.