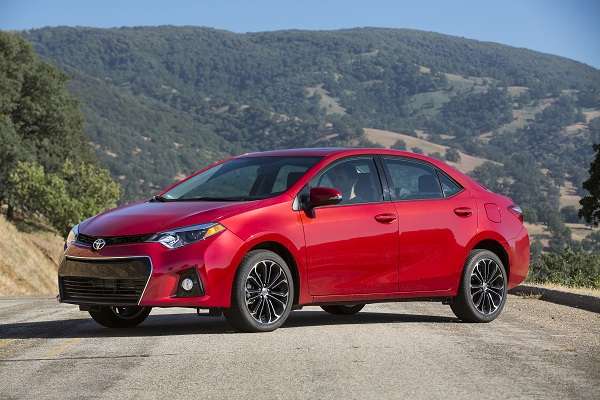 In just the latest example of gasoline cars busting the diesel myth the 2014 Toyota Corolla LE Eco's 35 MPG combined beats its diesel competitors' fuel economy. A close look at the match up reveals the Corolla also has the lowest emissions and lowest fuel cost to operate per mile in any situation.
Advertisement

Fuel economy is not which car gets the best mileage (the Corolla does by the way). Rather, fuel economy is the measure of how economical a car is to run in terms of fuel cost, and it is not the same for diesel and for cars that use regular gasoline. Diesel is more expensive and that has to be factored in for a fuel economy analysis. Let’s start with fuel efficiency, which is a measure of how far a car can go on a gallon of fuel.

The 2014 Toyota LE Eco with its standard wheels gets 35 MPG combined. One Toyota representative we spoke to was firm in their confidence that this number will not be an exaggeration like the Hyundai numbers of a few years back. In fact, according to our source, the EPA verified the test for the Corolla themselves, rather than trust Toyota. The Chevy Cruze diesel gets 33 MPG combined and the Jetta 34 MPG.

On the highway the Cruze beats the Corolla in fuel efficiency garnering a 46 MPG rating. Corolla gets 42. However, when we compare fuel economy using $ 4.00 as the price per gallon of diesel, and $3.40 for regular unleaded, the Corolla again wins the fuel economy battle costing just 0.081 cents per mile versus the Cruze at 0.087 cents per mile on the highway. These prices are real in the author’s area today. Yours may vary.

Let’s now look at the diesel societal-benefits argument. Despite diesel car advocates trumpeting their favorite fuel’s miraculous abilities, diesels are neither more fuel efficient, nor more environmentally friendly than modern gasoline powered cars. Let’s now review how we get either diesel or gasoline. We get either and both, from a barrel of refined crude oil. Currently, according to a wide number of sources, a barrel of refined crude in America yields about 19 gallons of gasoline and about 11 gallons of diesel. Diesel lovers can wish otherwise, and we are willing to be proven wrong about this, but by all accounts moving to diesel does nothing to reduce America’s dependence on oil, foreign or otherwise. In fact it moves us in the wrong direction.

Thus, we have established that the Toyota Corolla has better fuel efficiency in terms of combined mileage than the two diesel cars it competes with. We also have shown why the car is more fuel economical, even on the highway than the Cruze. Furthermore, we have proven that the environmental measurements and societal measurements most commonly associated with cars favor the gasoline car over diesel. In terms of pricing, similarly equipped Corollas are just a bit less expensive than the Cruze, and much less expensive than the Jetta (about 20% lower). Corollas also have two years of free maintenance which means lower overall cost of ownership.

Just in case the diesel advocates wish to explain away the Corolla LE Eco as some sort of fluke, let us spoil the fun by also pointing out that the 2013 Nissan Sentra gets equal fuel efficiency (33 combined) and has lower output of CO2 than the Cruze. In fact, the Civic HF does as well. And the new 2014 Mazda 3. All are more fuel economical than all the diesel cars in their class.