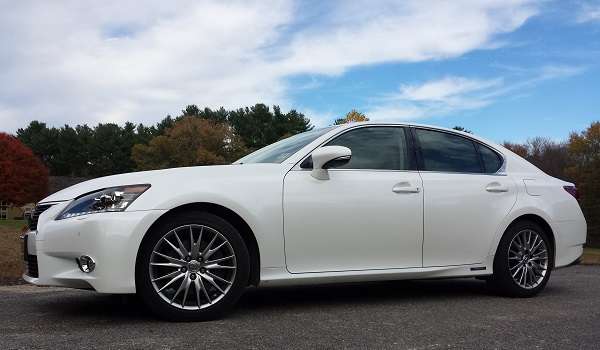 Diesel wants so badly for you to think of it as a green fuel. It is not now, and will not be in the future as this comparison highlights.
Advertisement

My recent test vehicle is the 2015 Lexus GS 450h hybrid. While researching some competitive models to see how its fuel economy stacks up I noticed that the BMW 535d has almost the exact same sticker price when similarly configured and that it too is marketed as a green car alternative. This article will explore how each comes to the green car designation and examine which is a greener car choice. The story will also help explain, to the handful of people that might wonder, why Lexus does not have diesel offerings.

Performance, Cost, Design, and Reliability – BME 535d vs. Lexus GS 450h
Before we go too far, let’s get one thing straight. This Lexus GS 450h is just as fast off the line as the “torquey” BMW 535d. I examined a variety of independent reviews, and both of these vehicles accelerate to 60 mph in about 5.7 seconds. Both are very capable and enjoyable sport sedans of about the same size, and are sold at the same price. The matchup seems more than fair for a comparison of their green credentials.

The BMW 535d employs many of the same fuel-saving measures that gasoline hybrids do. The BMW uses an 8-speed ZF transmission tuned for fuel efficiency with many more gears than would have been considered sane a few years back. It has the stop-start function first pioneered on hybrids, and its tires, alternator, steering system, and other components all have changed to be the most fuel efficient they can be. If, in your mind, you see the BMW 535d as an old-school performance sedan with a transplanted diesel motor you are way off the mark.

In terms of cost, both are about $70k with the luxury items expected in a car like this, have included maintenance and have long warranties. Diesel engines have a great reputation for reliability, but so do Lexus hybrids, which come with added warranty extesions for the hybrid parts. Couple this with the reality that the buyer of $70K sedan is not going to worry about small costs, and is very likely to either lease or buy certified, pre-owned, and the whole cost of ownership thing is not really worth arguing like it is in the affordable small and mid-size car classes.

These are respectable numbers, but it should be noted that a gasoline-powered Mazda6 is about the same size, and can beat every one of these numbers. The difference in these two is strictly straight-line performance. On a green car scale without factoring in speed, the BMW 535d is not even as “green” as a mainstream gasoline powered car its size.

The Lexus GS 450h is much closer to the Mazda6 benchmark than the BMW. The Mazda6 consumes 10.3 barrels of oil, creates 275 grams per mile of CO2, ties the Lexus with 8 out of 10 on the smog scale, and has a combined EPA mileage of 32 MPG. The gasoline powered Mazda6 is still a bit greener than the Lexus.

Lexus GS 450h Gasoline Hybrid Much Greener than BMW 535d Diesel
In summary, the Lexus matches the BMW in performance, yet gets 3% better fuel efficiency. Its fuel economy is 8.3% better (because of the fuel cost disadvantage of diesel), and it takes 17% more crude oil per year to move the BMW around. In terms of CO2, the dreaded “greenhouse gas”, the Lexus produces 15% less. The Lexus also has a 13% better smog rating than the BMW 535d. The Lexus walks away with the win having bested the BMW diesel in every measurable green car category while coming in at the same price and performance level.

I have not tested the BMW 535d, but my mileage over about 300 miles of mixed suburban and highway driving in the Lexus GS 450h is 36 MPG. Yes, gasoline powered cars often beat their MPG estimates, just like diesels are reported to do by owners. In fact, I have never tested any gasoline powered car that did not do better than its EPA estimate.

In the affordable car ranks, those cars which compete with the Toyota Corolla LE Eco and Mazda6, gasoline powered cars with no hybrid system are within 1 or 2 MPG of the combined MPG of the best diesels in the market (which basically means Volkswagen). Despite diesel lobbyists' claims to the contrary, the gasoline cars in this segment produce less CO2. In the ranks of the cars that sell the most in the US diesel cannot really be considered a green choice. In the premium ranks where performance counts, diesel cannot match the modern gasoline hybrids selling at the same price point.

This fact is the reason that Lexus does not market a diesel car in North America, and why even in Europe, where diesel long enjoyed artificial price supports making it much less expensive than gasoline, things are changing. As European regulators begin to punish CO2 production and smog production more, gasoline hybrids have the edge on all options that do not have a plug. It should also be noted that as battery technology and plug-in costs improve, adding a plug-in option to gasoline hybrids becomes easier and easier, while diesels have really no place left to go.

Related Stories:
Mazda reported to be working on diesel hybrids
Why are there no diesel hybrids?
2013 Jetta Hybrid bests Jetta TDI Diesel in cost of ownership comparison
Study finds Lexus about twice as dependable as BMW