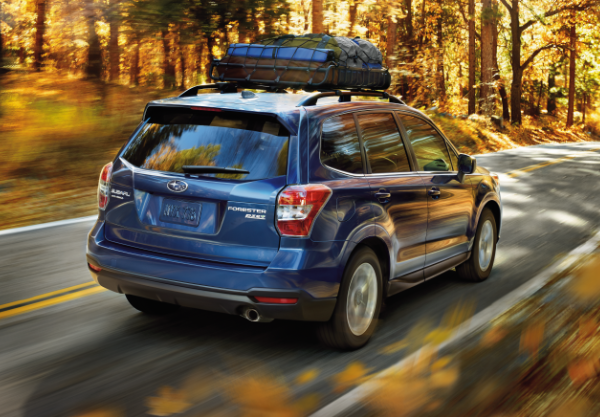 Two of the best compact crossovers on the market have a lot to offer but many key differences.
Advertisement

This week we tested the 2016 Subaru Forester. Our $28,540 2.5i Premium matches up almost perfectly with the 2015 Toyota RAV 4 XLE we tested a few weeks back which had a price of $28,967. Both offer a lot of value for the dollar, but each manufacturer chose to allocate its dollars in a different way. Like all of our matchups, this one is win-win, but we will tell you what the strengths of each model are so you can choose which might be best for you.

Interior Design and Comfort
The 2016 Subaru Forester’s first big strength is its amazing view of the road. Subaru has created a windshield and side glass area so large that you feel like there is no metal around you at all. It is a wonderful departure from the trend by automakers to make vehicles more and more like bunkers. The commanding view of the road is confidence inspiring and just plain enjoyable.

Climbing in, one is treated to a cloth power heated driver seat with power lumbar support. This is the first of a few areas that the Subaru beats the RAV 4 XLE, which comes with manual seats. The Forester’s seats are easy to make comfortable. However, my right knee had less room than in the RAV 4. If you are tall, the Forester offers excellent headroom and feels open and airy. However, your leg will be pressed against the center console. The RAV 4, on the other hand, has a floating dash design that frees up legroom better than any compact crossover on the market. At their very close price points, both offer heated seats.
Read More About Forester: 5 reasons why buyers are snatching up Forester in record numbers
In the back seats, both vehicles are spacious and comfortable. I was able to sit behind myself comfortably in both the Forester and RAV 4. Cargo area is also good for the segment. Both the Forester and RAV 4 have moonroofs, but the Forester's is much larger.

Infotainment
The Forester comes with a very simple to use touch-screen Nav and audio system, back-up camera and an App suite including Pandora integration. So too does the RAV 4. The RAV 4’s screen seems a bit more compact, and the Subaru offers a larger multi-informational screen above the console in the dash than the Toyota. Still, the Subaru and RAV 4 are dead-even in this category.

Drivetrains and Fuel Economy
The Subaru Forester, like its big brother the Outback, has been enlivened by the company's new CVT (shift-less) transmissions and updated four-cylinder, direct-injection boxer engines. Off the line, the Forester feels very peppy. The engine is not overly buzzy (something I remembered about the two Outbacks I tested this year). The Forester’s 27 MPG combined fuel economy is very impressive, and our testing confirmed it is a real-life number.

The RAV4 uses a six-speed transmission with its four-cylinder engine. Those that want the feeling of a shift will appreciate its old-school technology. The RAV 4 is one of the last compact crossovers with a traditional shifting transmission. The fuel economy suffers because of this though, and the RAV 4’s 25 MPG is not at the top of the class, but is also not terrible.

Driving Feel
The RAV 4 XLE and Suabru 2.5i Premium are a pair of the last daily drivers not yet ruined by automakers installing ridiculous low-profile tires. Both have sensible shoes, and therefore the ride is good over rough roads (which is all the roads in the tester’s area). Bravo Subaru and Toyota. The RAV 4 has the edge on handling. It is a bit sharper and a bit less tippy. The Subaru leans more in corners and it requires more steering effort. Not sloppy, but also not tight. Both are fine for normal driving, neither is a sporty feeling crossover like the premium brands.
Read More About RAV 4: RAV4 XLE AWD's secret weapon - sensible shoes

Safety
The Subaru Premium 2.5i we tested had the excellent EyeSight forward collision prevention (FCP) system. It is the best in the industry and coupled with the top crash scores possible, the Forester is a Top Safety Pick Plus. Our RAV 4 did not have Toyota Safety Sense, which is its version of FCP. However, the 2016 model, (which is about to go on-sale) RAV 4 XLE will have this technology and it only adds about $350 to the cost of the vehicle. With it, Toyota’s RAV 4 is also a Top Safety Pick Plus.

Exterior Design
We left this for last because it is truly subjective. We see the RAV 4 as being “highly styled.” Toyota tried hard to make the RAV 4 look great and it received a minor front bumper update recently. It is a “swoopy” look from the side, and in back also looks good. The Forester to our eye is plain looking. That is not a bad thing, and many might prefer it. Both vehicles sell very well, so the looks are not holding either back.

Conclusion
The Subaru’s power driver’s seat, better fuel economy, and modern CVT set it apart from the RAV 4. The RAV 4 for its part looks more exciting and offers a traditional transmission for those that have not learned to love shift-less driving (as this writer has). The Subaru has a slight price edge, but dealer discounting would negate any clear win there for Subaru, the prices are that close. Either would be an excellent choice. This matchup is truly a win-win.