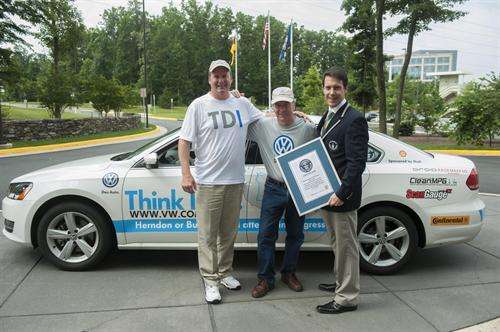 The surprising truth about diesel fuel

Although still rare, diesel powered vehicles are gaining in popularity each year. Many think that by using diesel they achieve two green goals. First, that less petroleum is used per mile, therefore America benefits by using less oil. Second, that diesel engines produce less CO2 emissions. A quick look at the facts reveals that both are untrue.

According to the US Energy Information Administration (as well as multiple other sources we checked) one barrel (42 gallons) of crude oil can be refined to produce about 19 gallons of gasoline. The same sources also state that a barrel of crude oil can, on average, produce about 10 gallons of diesel fuel. Therefore, a diesel vehicle would have to achieve literally twice the mileage of a gasoline car to use less oil per mile. Simply put, the most modern and efficient diesel engines don’t even come close. When a diesel is compared to a modern gasoline hybrid engine, in the same size vehicle, with similar performance (such as 0-60 mph times), the hybrid wins. Case in point; the Volkswagen Jetta Diesel vs. the Volkswagen Jetta Hybrid. The hybrid has dramatically better EPA estimated fuel economy (42 mpg city, 48 highway, for a combined 45 mpg) than the diesel (30/42 and 34 mpg combined). In terms of how much crude oil is used as these vehicles cover a mile, the gasoline car uses only about one third as much oil as the diesel does. In terms of the 0-60 mph sprint, we reviewed a number of test reports and the consensus is that the gasoline Hybrid Jetta is about a second quicker.

In terms of CO2 produced per mile, the government website www.fueleconomy.gov is a great resource. Using that as our guide we compared the two cars and found that the diesel produced a whopping 50% more CO2 per mile than the gasoline (hybrid) car did. The diesel puts out 297 grams per mile and the gasoline car 200 grams per mile. To verify that these numbers were not somehow just leaning the way of the gasoline car due to its being a hybrid, we also compared the Nissan Sentra with a conventional, non-hybrid gas engine, and the Diesel Volkswagen Golf. Both get the same EPA estimated combined mileage. The gasoline car won that comparison as well. Comparing the base (non-hybrid) gasoline engine in the Jetta to the diesel Jetta shows that they produce almost the same grams per mile of CO2.

German automakers introduced diesel cars to the US and they remained a small niche for many years. Now, Volkswagen, BMW, Mercedes Benz and others are bringing diesel options to the US of most of their models. Mazda is set to introduce a new diesel engine to the US in its Mazda 6 and possibly the Mazda 3 and CX-5 at some point. Chevy has just launched a diesel powered compact car as well. Without fail these vehicles are marketed as green choices for the consumer, but there seems to be no clear basis to the claim. In Europe, as well as in many other parts of the globe, diesel is taxed less than gasoline per a given volume, say a liter. So for many decades diesels have been the focus of the automakers serving those markets. The European Union also uses a different test procedure to determine a vehicle’s mileage, and the results always yield a higher number than the EPA test. Perhaps this is one of the reasons people assume that a diesel car will output less CO2, or use less oil per mile. Whatever the reason, it is an incorrect assumption.

Throughout this comparison we have had to simplify some things. In the US almost every gallon of gasoline actually contains at least 10% ethanol, which is produced mainly from corn. Most people consider this a carbon neutral fuel. Therefore, the “gas” we are talking about is actually about 10% better in terms of CO2 than our numbers here. The advantage for gasoline only widens. Biodiesel exists, but is not sold at retail fueling stations in most parts of the US. We also don’t go into great detail about refining. Yes, refining can be done to maximize the amount of diesel or gasoline in a given barrel of crude, but the results don’t change dramatically. Both gasoline and also diesel are made from each gallon of crude in the US refineries. The numbers above are easy to verify from a variety of sources.

Diesel is also very close to the home heating oil used in all parts of the US where it is cold in the winter. Natural gas is a wonderful home heating fuel, but it is not available in all areas. Diesel is also perfectly suited to heavy trucks and machinery like trains for a variety of reasons including maintainability, high torque at very low RPMs, and the benefits of range being of much higher importance in tractor trailers. A shift to using diesel in cars, if it were to succeed, would put price pressure on home heating oil as well as fuel used in commercial vehicles. That would also increase the cost of diesel a bit and decrease the cost of gas a bit. These are observations, not arguments.

Diesel does have its benefits in passenger cars. Many prefer its very high torque, available at low RPM ranges. However, gasoline turbocharged cars also have that benefit and the automotive world is quickly turning to the 2 liter gasoline turbo as the default standard gas engine. On the other hand diesel engines are loud. That means they require insulation and that means weight. There are certainly pluses to diesel, but the same is true of gasoline.

Here in the US diesel is the most expensive liquid fuel one can buy. Given that it costs more per gallon, uses about twice the crude oil per mile as an equivalent gasoline powered car does, and outputs more CO2 in grams per mile, it is hard to understand why diesel engines have a developed a green reputation.

Jacques Page wrote on January 14, 2015 - 6:11pm Permalink
Your statement "Therefore, a diesel vehicle would have to achieve literally twice the mileage of a gasoline car to use less oil per mile" is misleading. The said barrel of crude produces 19 gallons of gasoline AND 12 gallons of Diesel fuel. It also produces 4 gallons of jet fuel, 2 gallons of LPG, 1 gallon of heavy heating oil and 6 gallons of other products. Please, verify your facts before emitting such biased opinions.
Matt wrote on August 26, 2015 - 8:14pm Permalink
You have fallen prey to the "MPG illusion" and have reached factually incorrect conclusions on CO2. Search google for Berkley MPG illusion. Yes, burning diesel does produce more CO2 per gallon than gasoline (19.64lbs of CO2 per gallon of gasoline and 22.38lbs of CO2 per gallon of diesel) but that is more than compensated for by the increased efficiency of diesel engines. Here’s a case study: a golf TDI with 36MPG diesel vs the golf GTI with 28MPG gasoline. So if you drive 100miles in these two cars and achieve the rated mileage you will have burned: 3.57G of gasoline which yields 3.57*19.64=70.14lbs of CO2 2.77G of diesel which yields 2.77*22.38=62.17lbs of CO2 The "green reputation" of diesel engines is well deserved as the case study above shows that for every 100 miles the diesel engine prevented the release of about 8lbs of CO2 (a greater than 10% reduction).
Dan Keiser wrote on January 19, 2016 - 8:30pm Permalink
The statements about how much Gas or Diesel is produced by refining a barrel of crude is disingenuous as the barrel of crude produces both the Gas AND the Diesel plus other products. Refining Crude actually produces about 5 percent more product than it uses crude.