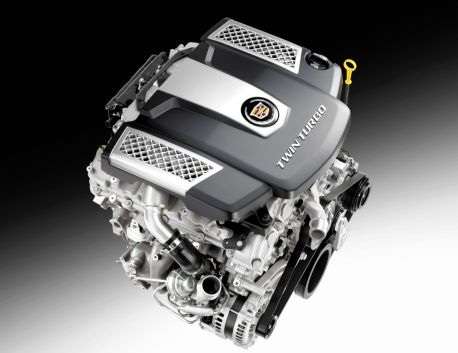 Cadillac has announced a new twin turbo V6 engine for the CTS. This engine could also be the new ATS-V engine and it would bolt right in.
Advertisement

Is Cadillac preparing the 2014 ATS-V? Cadillac recently surprised a lot of enthusiasts by announcing it will be installing a new twin turbo engine in the 2014 CTS which will be unveiled this coming week at the New York Auto Show. The new 3.6 liter V6 will be based on the current “high content” engine that GM uses across its product lines. This is a very good thing for the recently birthed Cadillac ATS. It means that the smallest Cadillac now has a mill worthy of the “V” moniker and it will bolt right onto the same engine mounts it already uses.

Since the ATS was launched about a year and half ago this news outlet, and others, have speculated that Cadillac might someday offer an ATS-V variant of the new compact sports sedan. However, even though things seem all peace love and profits over at the new GM, the General has to be careful what it does with taxpayer money. Profit sapping fuel sippers and EVs = OK, go for it. Cash cow muscle cars and expensive toys for millionaires = use caution. GM has been able to pay back a few of the loans your neighbors and you provided though, and logic must prevail if GM is to be viable going forward, and that means making cars that bring customers into dealerships, and buyers going out the door in a car that cost less to build than to sell. An ATS-V would fit that bill if the car didn’t require special tooling or a unique engine.

A 2014 Cadillac ATS-V with the twin turbo engine would not gain much front end weight over the current car with its top engine, the normally breathing 3.6 liter V6. The car would jump from about 320 horsepower up to about 420. With its approximately 3700 curb weight this rear-drive car would be one of GM’s fastest vehicles - ever. Only the Camaro ZL 1, the Corvette, and maybe the CTS-V would have a better power to weight ratio. Our own Patrick Rall wrote that the CTS with this engine would likely have a 0-60 mph time of about 4.6 seconds. That it very fast. However, an ATS-V with the same engine would be a car that could reach 60 in under 4 seconds. The technical term for that is “Stupid fast.” There would only be 3 single cars in the GM line-up that could compete with it.

Let’s move our comparisons beyond the GM portfolio. How would an ATS-V compete with an M3 from BMW? Very well. The ATS-V would have a similar power to weight ratio and also a similar weight. The 2013 BMW M3 has a V8, but the engine produces “only” 414 horsepower. The ATS-V would be competitive with this car. If the ATS had better fuel economy, that would just be icing on the cake. Lexus is dropping the IS-F sports sedan, and its new IS350 will sport only about 306 horsepower, so that car will no longer be in the race. Infiniti much the same. Mercedes and its AMG division could produce a C variant to be as powerful, or more powerful as the ATS-V, but at what cost? The good build cost / sell price ratio is the ATS-V’s secret weapon.

You can tease GM for many things including, but not limited to, the Pontiac Aztec, the Jobs Bank program, the model years 1972 through 1990, and for not paying taxes on its profits, but it is hard to argue the three CTS-V cars it produces aren’t both profitable for GM, and a world class automobile line-up. Equally important, the existence of the “V” series allows Cadillac to show smoky burnouts and racetrack footage in its commercials without customers laughing. Some of those customers might visit a showroom with the intent of checking out the V and go home with a more civilized CTS, which is basically the plan.

The ATS rocketed out of the gate in terms of sales, and last month the ATS outsold the CTS. Hopefully the ATS will continue to sell strongly, but it may do what most new cars do, which is level off, and eventually, dip in sales. That would be the moment Cadillac would launch the new ATS-V. Owners of the first few years of production might be lured back to showrooms, customers on leases getting oil changes could be walked upstairs to see the new ATS-V, and Cadillac would be able to renew enthusiasm for the ATS without a platform change or engine specific to only the ATS-V.

Since Cadillac is already going ahead with the engine in the CTS, any additional engines built for placement in other cars actually lowers GM’s cost per unit on that engine. GM could look to the Camaro SS to use this new engine instead of the 6.2 liter V8, and my recent article suggested exactly that. However, readers are already writing in saying “NO!!!” We have to agree. A Camaro SS or Z28 without a V8 is just silly. My inclination would be to type a sentence next including the words “Corvette” and “V6,” but my hands will not allow me to. The logic leads us to the ATS-V and perhaps an SRX-V, but that tallish platform may have trouble with this much power.

Before we sign off it must be said that despite all of our talk about how cars should be profitable, we can still dream that an ATS-V coupe, or maybe even a hard-top convertible coupe, might be someplace in the CADD systems over at GM Design. If so, it would be the most exciting Cadillac since the first CTS-V coupe was announced.

Patrick Rall wrote on March 21, 2013 - 1:50pm Permalink
The current information has shown that all wheel drive with not be available in the CTS with the twin turbo V6. Perhaps the TT/AWD setup will be reserved for the ATS-V? Tack on a few more ponies to separate the ATS-V from the CTS while still leaving plenty of room for the CTS-V...with AWD and a manual transmission...it would be a monster.
John Goreham wrote on March 21, 2013 - 4:23pm Permalink
You're right! With its relatively low weight and huge power AWD on an ATS-V would be cool! It would stomp an Audi S4. If it was a 2-door it would be a great domestic alternative to the Audi RS 5.