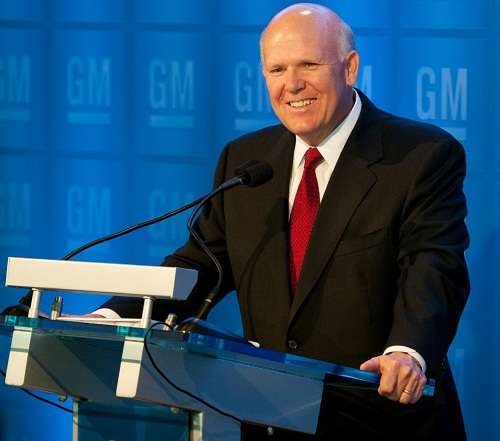 General Motors is enjoying its best growth in the history of the company as we know it. Not surprising, since the company is only a couple of years old. Even when compared to the “Old GM” days, the company seems to be on a path to incredible volume. That volume has not been unprofitable, but GM’s CEO and Chairman, Dan Akerson, pointed out at the GM shareholders meeting yesterday (June 11th, 2012) that although GM is making profits, they are not in line with the company’s goals.

GM's Fortune 500 Ranking
Over the past year GM generated about $7.6 Billion (with a B) in profits. In a recent press release by GM, the company noted that it is a Fortune 500 company with GM ranking near the very top in total revenue, but somewhat lower on the list in profits. Despite the fact that many of those other business are in other types of industries such as the consumer electronics market (think iPAD) and petroleum industry (Remember the term “excessive profits?”) GM feels that its profits should be higher. As part of his statements on the topic Mr. Akerson stated “GM was ranked No. 5 in revenue, but when it comes to profits GM ranked 20th. To be great, GM must close this gap by steadily improving our margins. It’s fundamental to earning a blue-chip multiple for GM stock, and ensure the company will be successful for generations, not just a few quarters or a few years.”

GM Pays No Tax On Profits
Not mentioned in the press statement was where GM ranked in after tax profits. In 2009 GM was granted a $49.5 billion bailout by the US taxpayers by way of the federal government. Since 2009 GM has generated over $13 billion dollars in profits. However, it has not had to pay any tax on those profits, unlike oil companies, unlike Apple, and unlike all the small mom and pop businesses in the United States that did not receive a bailout. This puts GM in the same small fortunate group of companies often referred to as the “Wall Street” companies, such as Citibank, that so many people protested against over the past two years. Although GM does pay other taxes, such as payroll taxes and state taxes, they are small by comparison to the tax that would have been owed by GM on its profits had it been treated like other typical US companies.

GM's Plan To Share Platforms
In order to drive higher profits for GM Mr. Akerson outlined some steps the company will focus on which include:
- Reducing “architectures” 50% by 2018. This translates to platform sharing, which is not necessarily a bad thing, but has resulted in some badge engineering by GM that did not help it in the past.
- In what seems a contradiction to the above, launching a historically massive product offensive. Apparently, many more GM vehicles on the same underpinnings. As an example of a winning product Mr. Akerson pointed out the new Buick Verano Turbo.
- Protecting the company by using a “Fortress” balance sheet and addressing some pension issues.
- Working in Europe to meet local product and model goals and working with unions for better concessions to “remove capacity” all the while introducing new models.

Summarizing the mood at GM Mr. Akerson said “We now have clarity of purpose backed by true accountability, and that’s part of a broad cultural change underway at GM.”

Anonymous wrote on June 13, 2012 - 9:12am Permalink
Working in Europe to save money. That's "outsourcing" which is a practice that I would bailout's would avoid. I would think that in the case of GM, moral bankruptcy should have been built into our pick of CEO's. The article is correct when saying that you fit in with "Wall Street." As a nation we should break you up with the banks, and claw back your excessive salary and bonus and pension. You're a carpetbagger.
Anonymous wrote on June 13, 2012 - 6:18pm Permalink
I say Taxpayer Robbers, and everyone that buys their junk is backing them . american and canadian bailedout and soon to be built in china government motors
Anonymous wrote on June 17, 2012 - 2:43pm Permalink
higher tax free profits, sounds alot like opec , stick it to the consumer oh wait gm is sticking it to the taxpayers while enjoying tax free profits what a scam.