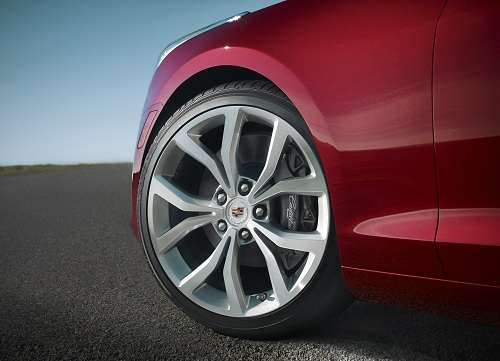 GM is floating the trial balloons regarding an ATS-V model. Will Caddy take on the BMW M3?
Advertisement

General Motors made no secret that its coming 2013 Cadillac ATS is targeting the BMW 3-Series. Cadillac made weight, performance, and size calculations for the new ATS around the BMW-3 and the company feels like it hit all its targets. In a recent press release from General Motors, the company invokes the “V” moniker and is throwing around talk of racetrack performance.

Cadillac CTS-V Braking
One of the easiest bits to bolt onto an existing car like the 2013 Cadillac ATS to improve performance is brakes. Adapting an engine or new transmission is much more difficult and costly. By sourcing upgraded brakes from Brembo like those used on the current 2012 Cadillac CTS-V, GM adds almost no overhead to the existing car and can improve results measurably. Dan Sandberg, president and CEO of Brembo North America was quoted as saying “Performance, safety and style are the trademarks of all Brembo high-performance brake systems, whether on the road or on the track. With the Cadillac ATS, we see a perfect example of how Brembo’s advanced technology can be used to substantially improve the safety of what is already a great performance luxury sedan.” With the Brembo brake package Cadillac claims a best in class stopping distance from 60 mph of 129 feet.

Cadillac “V” Suspension
In addition to the braking performance upgrades GM can add, suspension is another area that the car can have low volume variants with dramatic improvement. GM is a world leader in magneto-rheological fluid damping. Called Magnetic Ride Control, and found on very few other brands worldwide (Notably Ferrari) this technology is one of the best ways a car can outfitted with variable ride characteristics. For example, the car can have one setting that is great for bumpy roads and another that is very firm which is usually ideal for spirited driving. A “normal” mode is usually the default. Again, overall costs can be controlled because base models of the ATS can come with a more conventional suspension.

Cadillac Added Lightness
One of the axioms of making an existing car faster is to add in lightness. Cadillac is proud to claim that the 2013 ATS it is over 100 pounds lighter than such competitors as the Audi A4, and some Mercedes C-Class models. Cadillac took a common sense approach to this weight management and it yielded good results without adding a lot of cost to the base model car.

Cadillac ATS pricing
These “bolt-on” improvements will give the 2013 ATS quite an impressive marketing blurb if GM decides to use it. It will be able to advertise the ATS as “Starting at $33,990” and then start talking about “Available features” that enthusiasts will recognize as BMW M3 type go-fast bits. Like all manufacturers, GM won’t mention that completely outfitted as an M-fighter the final price may approach $50,000.

By dribbling out press releases highlighting the new 2013 ATS’ available components that compare to the current Cadillac CTS-V, GM is strongly hinting that it is going to pick a fight with an industry icon.