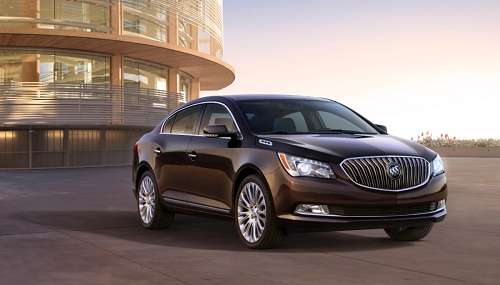 Buick's full sized luxury car will see improvements throughtout, but is not a dramatic redesign.
Advertisement

The Buick LaCrosse will be new in 2014 and today General Motors revealed the new vehicle. Will the LaCrosse have what it takes to compete in this difficult segment? It looks like it will. The segment that LaCrosse is in is the full size, near luxury segment. Buick would say that it is actually in the luxury segment, but would then sort of explain that the Cadillac offering of that size is actually more of a luxury model.

Confusing? Maybe, but the success of the LaCrosse so far is not in question. Last year the LaCrosse was responsible for about a third of overall Buick sales with deliveries of 57,076 units. In 2013 the rate has declined, with February being down 30% over last year. However, inventory management by GM may be part of that. With the new car coming it may have slowed production a bit to avoid embarrassing model year overlap at dealerships. The full sized Toyota Avalon and the Lexus ES350 compete with the LaCrosse. Interestingly, the Lexus sold almost exactly the same number of ES350s as the LaCrosse last year. Both the LaCrosse and the Lexus are new this year. It will be interesting to see how the matchup progresses. The Avalon has jumped up in sales to meet the volume of these two since its new restyling, despite reviews that claim customers were unimpressed.

The exterior of the 2014 LaCrosse is new and is defined by wing-shaped LED lighting. In back the rear lights wrap around the corners of the car. 20 inch painted chrome style wheels are now available. The overall exterior look is not dramatically different. That is typical for the segment. Big changes are not always welcome changes.

The Interior is also all new for the 2014 LaCrosse. In keeping with the segment’s theme, the interior was designed to be more modern. The console centers the driver’s attention on the large IntelliLink infotainment system. The upgraded Ultra Luxury Interior Package incorporates new seat materials and new seat shapes. Those seats will also vibrate to indicate coming trouble. They are part of GM’s patented safety alert seat system that gives drivers advanced notice of a coming potential crash. Tony DiSalle, U.S. vice president of Buick Marketing summed up the changes saying “We evolved the interior and exterior design, increased luxury amenities and materials, and enhanced the safety and personal technologies to give customers more reasons than ever to rediscover Buick.”

Drivetrains including the eAssist four cylinder and more appropriate to the class, six cylinder engines are unchanged. The 2014 Buick LaCrosse will be on sale this summer.