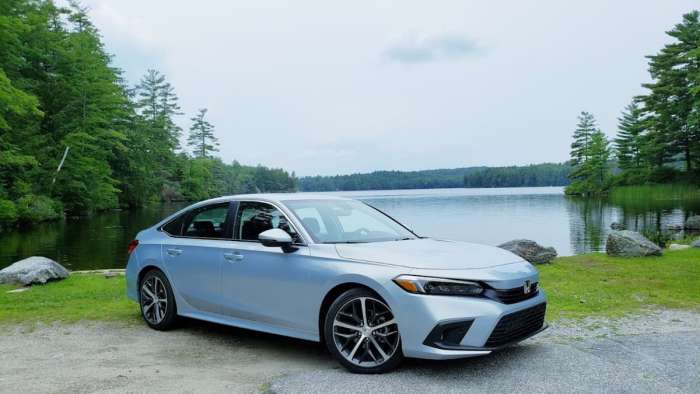 The new 2022 Honda Civic hatchback and Honda Civic sedan have just been awarded the highest safety rating offered by the most comprehensive testing agency in America, the Insurance Institute For Highway Safety's Top Safety Pick+. Both body styles of the Civic earn this distinction. Another popular vehicle model of approximately the same size and shape, the Tesla Model 3, also earns this distinction. Let's look closely at where the scores of both models are similar and different.

Crash Testing - Tesla Model 3 vs. Honda Civic
The Civic and Model 3 both earn scores of Good, the highest score, in every dynamic crash test. However, each of the tests breaks down a variety of sub-sections on the crash test results. Select a given test, say the small frontal overlap crash test, and you will find that the Tesla Model 3 earned a lower score than Good on the “Lower leg/foot” section of the driver’s side test. The Civic scored the same less than perfect Acceptable in this regard, but on the passenger side. Also, we noticed that the Civic had an Acceptable for Driver restraints and dummy kinematics. We point out these minor less Good scores in the subsections lest anyone (fan of Tesla or Civic) think that either vehicle earned a “perfect” result.

However, the crash testing results do point to the fact that both manufacturers design and manufacture a very safe body structure with good passive safety systems.

Civic Scores Higher In Crash Avoidance
Honda had advanced driver-assist safety systems before Tesla did. In fact, we tested a production Honda model (CR-V) with lane keep assist before Tesla offered the technology way back in 2014. IIHS tests driver assist technology, but focuses on front crash avoidance, since that is the most deadly of the types of crashes for which avoidance technology is available.

Civic Scores Higher In Latch Ease Of Use
Another area in which the Civic surpassed the score of the Model 3 is LATCH child safety anchor ease of use. Anyone who has ever used a LATCH child anchoring system knows that some are nearly impossible to use without serious bending and twisting. IIHS added its LATCH ratings so parents know how easily the most important safety system in the vehicle works in real life. The Civic earned a score of Good+, the Tesla Model 3 a score of Acceptable.

Civic Scores Higher In Roof Strength
One measure of a vehicle’s rollover protection and general strength is the roof strength test conducted by IIHS. Both the Model 3 and the Civic earn a score of Good. However, the Civic withstood more weight upon its roof and had a much greater strength to weight ratio than did the Model 3.

Conclusion - Safety Has Been Democratized By Honda
The Tesla Model 3 has a consumer cost ranging from about $40K to $70K and our estimation of the average transaction price would be around $55K. The Honda Civic costs a consumer dramatically less. The Civic sedan starts at about $23K and the hatchback tops out at about $30K. The Civic’s average transaction price is less than half the Model 3’s by our best estimation. Both are top sellers in the same general size category, and both also top their individual market segments for sales volume. Despite the Civic having half the new car consumer cost, it offers measurably better active safety technology and a structure that has equal or greater strength in testing.