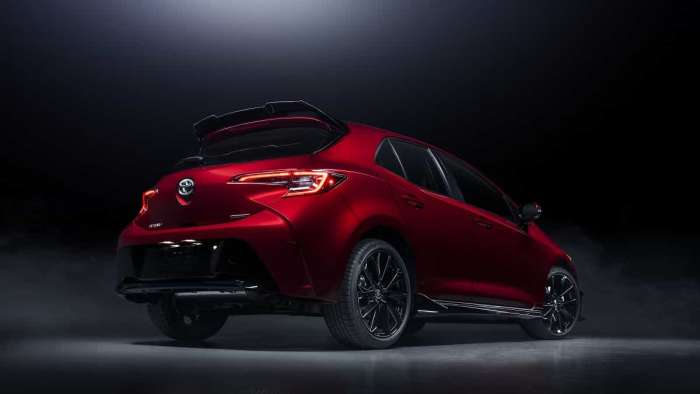 Toyota's 2021 Corolla Hatch SE is an appearance package. We wish the SE had more changes under the hood.
Advertisement

Toyota will add a Special Edition to its Corolla Hatchback line late this summer. The new SE Corolla will have special paint and an appearance kit. It looks great to our eyes. However, our wish for the Corolla isn't all about looks.

We understand that the Lexus division has some great cars, and more on the way. Like the new IS sports sedan. The well-equipped versions of those cars cost around $60K. Where is Toyota's exciting practical car that costs $28K? The Toyota 86 is fun, but it doesn't fit the bill as practical, and frankly, it too is still under-torqued for its mission.

We'd like to see Toyota place an engine under the hood of the Corolla Hatchback that has 200 ft-lbs of torque at 1,500 RPMs. An electric drive would be fine. Or a small turbo. Anything to make the car get up and go with vigor. As it is now built, the Corolla Hatchback is about 50 lb-ft of torque short, and the torque needs to be instant. And linear.

Instead of a needed engine transplant, the new Corolla Hatchback Special Edition gets a body kit that Toyota says "...adds a sporty front splitter, side skirts, black rear roof spoiler, a rear bumper garnish and a unique Special Edition badge." We don't need no stinking badges. Bring us torque.

John Goreham is not just a dreamer when it comes to hot hatches. He's owned a Supra and a Civic Si. John's a life-long car nut and recovering engineer. In 2008 he retired from a career in semiconductor manufacturing and Bio-tech to chase his dream of being an auto writer. In addition to Torque News, John's work has appeared in print in dozens of American newspapers and he provides reviews to many vehicle shopping sites. You can follow John on Twitter, and view his credentials at Linkedin

Mark Day wrote on June 4, 2020 - 12:06am Permalink
Good one: “We don't need no stinking badges”. Speaking of badges, Toyota’s performance vehicle is the Supra, aka, BMW Z4. If Toyota continues to badge-engineer performance vehicles I suggest the process be applied to the BMW X3 M40i. Cramped sport coupes are, like, so yesterday. PS, I’ve been unable to locate a Corolla Hatchback with a manual transmission, for a test drive. Any sporting pretensions, with a CVT is ridiculous, but does fit well with an “appearance package”. Conclusion - Toyota is going for the cheap and easy.

Tesla-Funded Research Reveals One of The Biggest Mysteries of EV Battery
Tesla Tesla Buyer Nets a Whopping $12,000 Discount After Asking for Reduction
END_OF_DOCUMENT_TOKEN_TO_BE_REPLACED