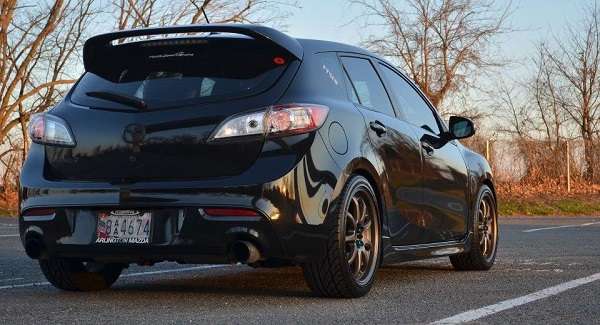 The 2013 MazdaSpeed 3 is about to be retired by Mazda with no replacement. Will the car be brought back?
Advertisement

The 2013 MazdaSpeed 3 will very shortly be sold out. This is according to Mazda, who was kind enough to respond to our questions about the vehicle. As of today the current US sales site for Mazda had the car in its on-line assortment, but Mazda has also confirmed that this will also end very shortly. It is time to say farewell to a legend.

The 2013 MazdaSpeed 3 is the fastest Mazda in production. Basically, a factory modified Mazda3, the car is still on the previous Mazda3 platform and uses an engine unique to it. With 263 horsepower and 280 ft-lb of torque, the engine is more than capable of turning the front tires to liquid. Mazda was one of the first hot-hatch makers to manage that situation well with a combination of mechanical and electronic solutions. The car also has a 6-speed manual transmission. We mention that partly because when this MazdaSpeed 3 is gone, there will be no Mazda3 with over 155 HP that can be had with a stick. The up-tempo 184 HP, 2.5 liter version of the SKYACTIVE 4-cylinder engines in the ‘3 does not come with a stick. The 'Speed has a huge following and is very popular with those that like to make fast cars faster.

My personal respect for the MazdaSpeed3 comes from my limited driving and racing school attendance. I’m a big fan and lucky graduate of some of the Skip Barber programs and Mazda is a long-time sponsor. In the last school I attended the instructors needed a vehicle that could stay ahead of the race-prepped MX-5 Miatas the students were in, yet be affordable, and have bullet-proof reliability. The MazdaSpeed 3 was their choice and it worked great. Around the corners the Miatas were faster, but as soon as we exited the corners the instructors could simply walk away from the Miatas to put the distance between the lead and follow cars they wanted.

Mazda has not released any new details on the 2015 MazdaSpeed 3 and will not even confirm there is one coming. We certainly hope there will be one, but it is definitely not a sure thing. One problem is that the 2013 MazdaSpeed 3 has an MSRP with the technology package of about $28K. The top-trim 2014 Mazda3 Grand Touring 5-door is roughly $32K. It is hard to imagine Mazda making a lot of money on a 2015 MazdaSpeed 3 unless the price is above $30K, even if it de-contents the ‘Speed. Are there buyers for a $34,000 MazdaSpeed 3. Maybe. Another issue is fuel economy. Mazda is all about fuel economy these days. Is there a manufacturer that isn’t? The 2013 MazdaSpeed’s 18 MPG city sticks out like a cold sore on the lip of a pretty girl. Fixing that, retaining the power, and retaining the price point is going to be almost impossible. Some rumors have the new 2015 ‘Speed being all-wheel-drive. Mazda certainly has the running gear ready to go from its previous Mazda6 and current CX-5. AWD would be fun, but it adds more money and subtracts fuel economy from a vehicle that is challenged in both categories. Boy would it be nice to see that car match up with a WRX though…

Buyers are the other problem. Only 3 to 5 percent of the Mazda3s sold in the past few years were MazdaSpeed 3s. That is roughly 5,000 vehicles in a good year, which is right on the line of viability. On the other hand, Mazda can’t give up on fast cars and still make zoom-zoom commercials without being laughed at. The MX-5 Miata only sold 6,300 cars last year and it seems like the new version is always just over the horizon.

So it is sayonara to one of the best affordable performance cars of the last 20 years, and hopefully kon'nichiwa to a third generation of awesome.

Main story photo used with the permission of Kris Inthepark. Gallery photos are submitted by readers. Credits shown when clicked.