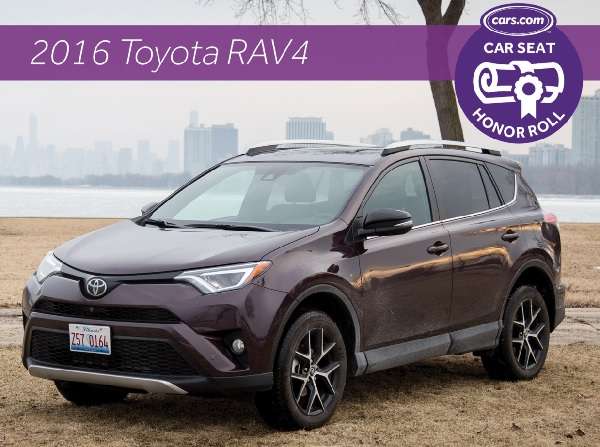 Cars.com has high praise for the Toyota RAV4
Advertisement

Part of the reason that compact crossovers now outsell every car class is that they are significantly easier to live with. The higher seating position is often noted for its commanding view, but the truth is, getting yourself and your family into and out of a crossover is much easier than it is with a sedan. Today’s news is that the Toyota RAV4 has earned the top rating for car seat ease of use in Cars.com testing.

Unlike other organizations, Cars.com doesn’t just rate the LATCH system in cars it tests for car seat ease of use. Rather, it scores vehicles on five or six areas depending upon how many rows of seats the vehicle has. In Cars.com testing, the RAV4 earned straight As in the Latch, Infant, Rear Facing Convertible, Forward Facing Convertible, and Booster seat categories. Note that Convertible refers to the seat type, not vehicle type.

Commenting on the RAV4, Cars.com said, “When it comes to car seats, however, it's clearly at the top of the class. Our Challenge judges praised the RAV4's "massive" backseat, which helps it easily handle those space-hogging rear-facing car seats.” Only six vehicles out of the 84 model year 2016 and 2017 vehicles Cars.com tested earned straight As. The only other compact crossover on the group’s list is the new Ford Escape.

In addition to earning top scores on car seat ease of use, the RAV4 has other family-friendly merits. Unlike the Ford Escape, the RAV4 is an IIHS Top Safety Pick + rated vehicle. Also, for 2017, the RAV4 becomes the only affordable compact crossover to offer standard forward collision prevention with auto braking. Other automakers have pledged to add that important safety system within five years.

For more details on Cars.com's awards, please see this link.