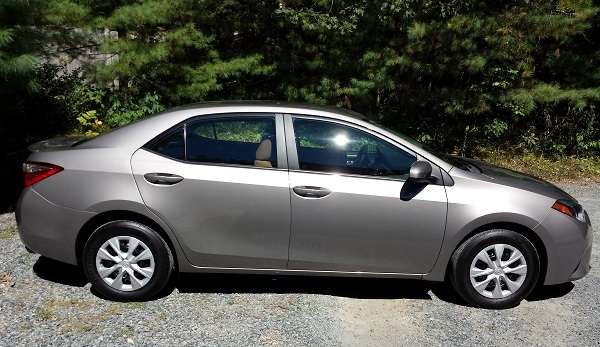 The Corolla LE Eco is the star of the affordable family car class. Here’s why.
Advertisement

The 2015* Toyota Corolla is Toyota’s second most popular car and off and on the top seller in its segment, which is a HUGE segment. The LE Eco is the most powerful of the Corollas and also the most fuel efficient. The Corolla LE Eco is easy to define by its fuel economy numbers, but doing so misses the point. This is a vehicle that excels in many ways, and just happens to be one of the most fuel efficient and economical liquid fuel cars one can buy.

When I was a kid my family had “The Dusta.” The Duster was a Plymouth family car that was in front of a lot of homes in the 1970s. The Duster was compact, affordable to buy and own, and great on gas, by the standards of the time. Plymouth is extinct, but the affordable family car isn’t. This type of car still makes up the number one and two most popular car segments in North America. The Toyota Corolla LE Eco now fits the bill of the old ‘Dusta, and it also happens to be one of the greenest cars for sale at any price.

Exterior Styling
The 2015 Corolla LE Eco has a sharp new front end compared to older Corollas. It was the first to move to Toyota’s new styling and sales went up. The Corolla looks like a slightly smaller Camry (of the just released style) and Avalon. At this price point of $20K you are not paying for style in a sedan this big. You are paying for practicality. However, the Corolla is a car that looks modern and not out of style for our times.

My Corolla LE Eco came with 15” steel wheels and wheel covers. This is not to save money (though I’m sure it does). It is because the 15 inch wheels and aero covers actually save fuel compared to the available 16” alloys one can opt for. With these wheels Toyota squeezes out a couple more MPG and puts the car ahead of rivals.

Wondering what Torque News thought of the Corolla with more options? Well here is your answer! A Review of the 2014 Toyota Corolla LE Eco Plus: New and Improved While Maintaining Affordability

Interior and Infotainment Details
Inside, the Corolla’s style works very well, and looks good. The dash is up and out of the way of the driver’s right knee. I’m six feet tall and the front of the Corolla is very roomy for me. This car is much more roomy than the Audi A3 or Mazda3, two cars about its size. The seats in my tester were manual, covered in cloth that looked good and which seemed like it would last two family generations, as many Corollas are asked to by owners. For short trips the seats are comfortable, but for those who plan to drive long distances Corolla offers more power seat options in the higher trim levels.

The trim inside the Corolla seems more upscale than the price point of my $19,510 MSR tester. There is a neat little color line around the trim that added color to the otherwise dark dash. In the center of the dash was a touch screen that worked very well. My tester had BlueTooth that connected my phone hands-free and could be actuated using the steering wheel. I was also able to stream my music from Pandora. The audio quality was decent not super, but remember the price. The screen is also the back-up camera’s monitor. I just tested two German cars in the mid- $30K range that did not have a back-up camera. Nor did they have the automatic climate control this Corolla did. My Corolla also had a spare tire, something I have a hang-up about. I despise cars without a spare.

The room in the back of the Corolla is a big deal. Two six-foot or taller people can sit back there very comfortably without the front passengers needing to move forward. Try this Corolla and you will be shocked by how large it is inside. This car is bigger inside than the Lexus IS sedan. The rear middle seat is not bad either and would certainly work for a child. The trunk is very large (for the segment) and the seats fold down. I hauled lumber home form Lowes with no problem.

The Drive
The 2015 Toyota Corolla LE Eco drives so well you forget it is so affordable. It is powerful enough and smooth enough around town and when merging onto the highway. Its 140 horsepower somehow do the job. The constantly variable transmission is the best of its type. Normally, I dislike CVTs, this one I have liked since I first drove it at the media launch a couple years back. It simulates shifts, and does not seem to moan and groan, like most of the CVTs I have driven.

The reason the LE Eco version of the Corolla is more powerful and also more fuel efficient is the Valvematic system. This more advanced variable valve timing in the engine allows the car to produce more power and also use less fuel. Originally, when I went to the product launch Toyota said that the reason it was not an all Corollas was availability. Now, over a year later, that excuse is starting to seem “less true.” My guess is cost. Either way, the LE Eco Premium is not far off of the “S” in terms of features.

Ride comfort in the Corolla LE Eco is excellent. It absorbs bumps and road imperfections much better than cars I have recently driven costing twice as much. Yet, it still handles well. Steering is direct and easy, and the power steering makes swinging the wheel around in parking lots very easy. BMW could learn a lot from studying this car’s steering. I tested an X1 recently that was so bad it was almost funny.

I credit the 15 inch steel wheels and Hancook Optimo tires with much of the good ride. I have driven more upscale Corollas with lower profile tires and they are rougher over the road without any improvement in handling. My tester was past 14,000 miles, yet the Hancooks were relatively quiet on the highway and had worn perfectly. Unless you cannot bear the look, I would strongly suggest any Corolla LE Eco buyer keep the standard wheels.

Price, MPG, Safety, and Value
The price of the Corolla is one of its main features. This is a very affordable car. Cars equipped with what you need in a family car start under $20K. Fully-loaded, the LE Eco Premium is about $23.5K. That moves you into Camry territory (after discounts on Camry) and makes a loaded Corolla a tougher choice. About 2,000 of the 33,000 Corollas that Toyota sells each month are LE Ecos in the approximately $20K price range. There are also L and LE models that are less expensive, and S models that are more expensive. The LE and LE Eco are the value buys.

All Toyotas come with 2 full years or 24K miles of included maintenance. The Corolla also holds its value very well and is third-best among cars in its class. Toyota wins pretty much every quality award and is way ahead in terms of used car reliability. Combine these elements with the fact that during my time with the Corolla it only cost 8 cents per mile in fuel, and it is easy to argue it offers the lowest cost of ownership of any family car in America. The Corolla LE Eco also emits less CO2 than any other car its size and price. This is the greenest affordable family car in the US market. No hybrid, diesel, or EV its size and price can match it. None are really even close.

The 2015 Toyota Corolla is an IIHS Top Safety Pick. It scored marginal on the small frontal offset crash and my test car did not have forward collision prevention. At its price point, I don’t there are any cars this size that are rated higher. Some cars like the excellent Mazda3 and larger Toyota Camry are Top Safety Pick + rated, but they come in at a substantially higher cost. Click for a full story on the Corolla's safety ratings.

The fuel economy and fuel efficiency of the 2015 Toyota Corolla LE Eco are fantastic, amazing, almost without equal. The EPA estimates the LE Eco will return 30 MPG city, 35 MPG in combined driving, and a whopping 42 MPG highway. I did much better. See my related story for more details, but I was never below 41.5 MPG over the almost 1,000 miles I drove this car in all types of settings. On the highway, without significant traffic, I averaged 43.5 MPG. The Corolla takes regular unleaded. If you compare this car to the VW Jetta diesel you will find that the Corolla LE Eco costs much less per mile for fuel, while at the same time emitting 9% less CO2 than the diesel.

In case it was not obvious I am of the opinion that the 2015 Toyota Corolla LE Eco is a significant car. Not only did I like the vehicle, and find it enjoyable, it seems to me that as a family car it stands head and shoulders above most of the field.