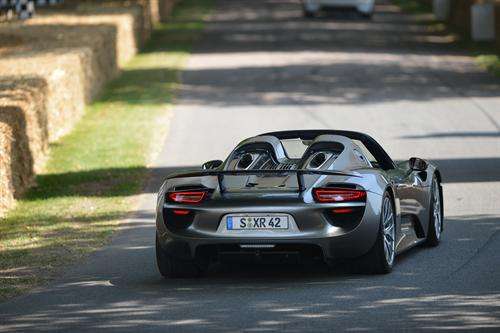 The 2014 Porsche 918 supercar made its public driving debut this weekend at the Goodwood Festival of Speed. If this doesn’t seem like news to you ask yourself this question; “How many times have you seen the previous super car from Porsche, the 959, run?” If you answered “zero”, as the author has, then you will realize that the first public showing of one of the world’s most exclusive supercars is no small event.

The new hybrid supercar from Porsche joins McLaren and Ferrari in the philosophy of, “if we can sell all we build, and price is no object, then why not throw in an electric drivetrain along with the one the driver’s expect?” That sounded great and the car even set a record at the famous German toll road on which all cars are now measured setting a 7:14 minute time on the track. Thus proving that one need not sacrifice the environment to have the fastest supercar. Until a Viper costing less than 1/10 the cost of the Porsche made by an American subsidiary of an Italian car maker beat that record with “just” a ginormous V10 engine. Hmm.

Only a limited number of 918s will be built. Exclusivity is all the rage with supercars. Ferrari even limits the number it sells simply to maintain its price point and to remind buyers that money alone does not buy you a Ferrari. Porsche plans to build about double the number of Ferrari LeFerraris that Fiat’s premium brand will produce. In fact, Porsche will build 918 of the 918. At such a low production volume, and since this is Porsche’s first hybrid electric supercar, the 918 will likely accrue value over time no matter what its price point.

That price points starts at a little over three quarters of a million Euros. Doing some math using this morning’s FX for US dollars from Euros, this publication has calculated that you will need almost exactly four large gym bags of stacked Benjamins to take home the base model 918. (Thank you to Breaking Bad for teaching us how many $100 bills a gym bag can hold). That is a cool one million dollars for those who like old fashioned measures of extreme wealth.

Hold on though. Do you really want the entry level version of an exclusive supercar? Of course not. So for you there is a double-secret Weissach version of the 918. This version is distinguished by exclusive colors (not that you would know, because you will never see the car, and thus not become accustomed to the “non-exclusive colors), and much of the sound insulation has been removed and the aluminum bits of trim replaced with carbon fiber. The treatment saves 77 pounds. The Weisach version costs about $94,000 more than the base model 918. At that price the weight savings costs $1,215 per pound. If you are a heavy person, liposuction may be a more cost effective way to reduce the weight of you and your ride.

However, the Weissach version is not about weight really. It is there in case you (and your entourage) find yourself at the Nurburgring-Nordschleife (that toll road/race track in Germany mentoined earlier in the story) and a guy in a 918 is also there with his posse. What a buzz kill that would be! Luckily, you can out-buy that greenfluent car nut (maybe) and have a unique color and 77 less pounds of aluminum to show him who’s the real Porschefile on the course that day.