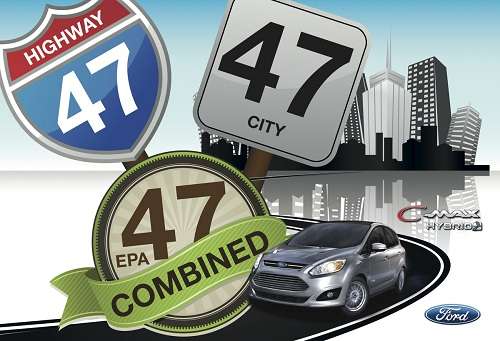 Ford clears up any doubts about who has the momentum in the fuel efficiency war.
Advertisement

The 2013 Ford C-MAX Hybrid is about to become the most fuel efficient family car available at a reasonable price. When the original Honda Insight and Toyota Prius came to market they were amazing, and we are still not back to the Insight’s original fuel economy numbers, but both cars were marginalized by their size. The Insight started as a two-seat vehicle that was close to being a kit car (although and extremely refined one). The Prius was larger, but it too was a subcompact and really was never considered an American family car. The people at Toyota followed the usual formula, growing these models into larger, much more refined vehicles. Both the standard Prius and the Honda Insight are really not family cars in the sense they could be used to do 90% of the chores and tasks asked of a family car in America. However, the Prius is now offering three separate sizes of the Prius, and the Prius V is very close to large enough now. Ford has had the benefit of watching all this happen and now has jumped into the game and may have trumped Toyota.

C-MAX Hybrid Fuel Efficiency
The new 2013 Ford C-MAX Hybrid gets 47 mpg according to the EPA. If you are wondering if that is city or highway mileage the answer is “Yes!” Rated 47 for both city and highway, this 5 passenger vehicle will set the new standard for reasonably priced fuel misers that can be used for day to day tasks. The Prius V, on the market now about one year, “only” gets 40 mpg around town and has a combined rating of 42 mpg. That is a significant difference. One or two mpg means nothing, but seven sure does. Furthermore, the Ford undercuts the starting MSRP of the Toyota by over $1000.00. Equally equipped cars will be close in price, but the starting MSRP is what often draws buyers into the dealership.

C-MAX Hybrid Just One Option
Ford has hit a home-run with the 2013 C-MAX Hybrid, achieving the targets it set for itself as reported by Torque News reporters in June and July. However, for some people the thought of wasting all that energy driving around getting only 47 is just reprehensible. For those true believers Ford will also offer another C-MAX called the Energi, which is plug-in hybrid. This version, although significantly more expensive, is still under $30K with tax rebates and it has – wait for it, nearly DOUBLE the fuel economy of the C-MAX Hybrid (actually more).

The 2013 Ford C-MAX Hybrid has raised the bar on family car fuel efficiency and is only overshadowed by its sibling.