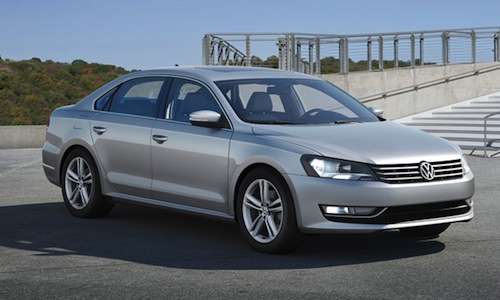 VW is recalling select Routan minivans for a wheel defect and certain Passat sedans over a potential fire risk.
Advertisement

Volkswagen has announced the recall of certain 2012 Volkswagen Routan minivans and Passat vehicles for wheel assembly and fuel system issues respectively. The Routan recall involves 15 vehicles manufactured from November 15, 2011 through November 21, 2011. Affected Routan minivans may contain right rear hub and bearing assemblies that were not fully machined. The consequence of this faulty assembly is wheel separation, which may increase the risk of a crash. The National Highway Traffic Safety Administration indicates that Volkswagen will begin the Routan recall this month. Defective Routan models will receive a new right rear hub and bearing assembly, free of charge.

As for the Passat, the safety recall involves 153 units built from January 18, 2011 through June 1, 2011. The NHTSA states that these Passat vehicles were built with an improperly sealed diesel fuel filter. The defective fuel assembly may make the Passat vulnerable to fuel leakage, which may lead to a fire. Volkswagen will begin the Passat recall next month and owners will receive a diesel fuel filter for free.

The newly announced recall is not unique amongst 2012 Volkswagen models. There have been recalls issued for the 2012 Passat CC, 2012 Golf, 2012 Jetta SportWagen, and two separate recalls for the 2012 Jetta.

The 2012 Volkswagen Routan ranks 8 out of 8 minivans according to U.S. News. The vehicle earned the lowest overall score of any 2012 minivan with just 7.0, based on 18 published reviews. Reviews indicate that although the Routan is a decent segment choice, “others in the class offer more flexibility, nicer interiors and better performance.” Most discouraging for the 2012 Routan is its paltry reliability score of 4.0 according to J.D. Power and Associates.

Though it is nowhere near the top of its class, the 2012 Volkswagen Passat faired slightly better than the Routan. The Passat ranks 11 out of 19 according to U.S. News’ list of Affordable Midsize Cars. The sedan earned a solid overall score of 8.4 based on 19 published reviews and test-drives. Despite finishing out of U.S. News’ Top 10, the 2012 Passat was named the 2012 Motor Trend Car of the Year in November 2011.