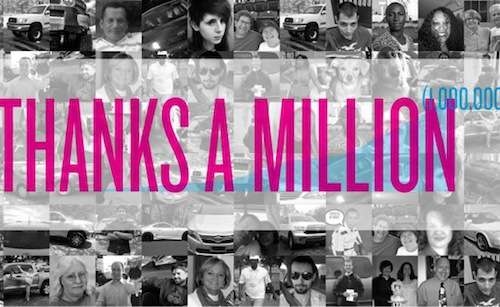 “Our fans helped us make Toyota’s Facebook page what it is today,” said Dave Nordstrom, vice president digital marketing. “We’re celebrating this milestone on one of the world’s largest social media channels by spotlighting our fans that got us here.”

Fans of Toyota have been encouraged to submit photos of themselves over the past few weeks to complete today’s big unveiling. Selected profile pictures were used to create a new masthead mosaic photo college on the automaker’s profile page. Fans have been also encouraged to submit any Toyota-related stories, which will be featured in graphs and timelines on Toyota’s Facebook page. The project is essentially an effort to celebrate the Facebook landmark through its customer’s perspective.

Despite being a novel idea, Toyota has certainly dropped the ball in relation to how other automakers have recently celebrated Facebook fan achievements. Just last month, Fiat celebrated its 500,000th Facebook fan by giving away 10 all-new Fiat 500 vehicles. Each of Fiat’s 500,000 fans were eligible to win a free vehicle and also a $500 voucher towards the purchase of a new vehicle.

Aside from Fiat’s vehicle giveaway, several other automakers have created fun videos for their fans to celebrate their Facebook success. Audi commemorated its 500,000 Facebook fans by releasing a video of professional racer Dindo Capello doing a burnout in an Audi R8. Ferrari made a similar video last month when the luxury car brand reached its 8 millionth fan on Facebook. Ferrari’s rubber burning clip featured a red 458 Italia and offered a thank you to all of its social media fans.

Although Toyota’s heart may have been in the right place the automaker’s effort seems rather sloppy compared to its fellow car brands. There has not been a great deal of feedback thus far from Toyota’s Facebook fans. The new “fan appreciation” banner has currently been up for 4 hours and has just 87 likes thus far, which doesn’t seem like a whole lot in respect to its 1 million followers.

Anonymous wrote on June 5, 2012 - 2:28pm Permalink
How can this author say Toyota's efforts are "sloppy" and yet rave about a video created by Audi and Ferrari? I don't care about a video, and watching a professional racer do a burnout isn't exactly what I would call "interesting". Come on, Mr. Faccenda.
Aaron Turpen wrote on June 5, 2012 - 4:56pm Permalink
Lemme get this straight.. in order to celebrate its 1 millionth fan on Facebook, Toyota opened its fan page up to spammers? Wow, that's brilliant. :)