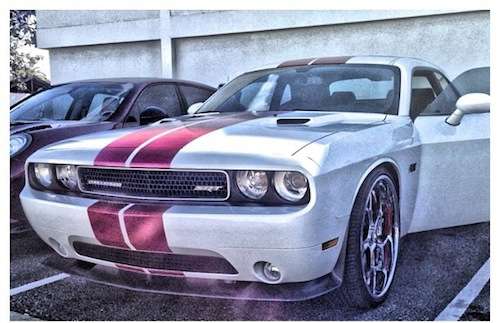 On Monday morning, just one day after the 49ers disappointing Super Bowl loss, The Game posted pictures of his 49ers-themed Dodge Challenger and 49ers tattoo on Instagram.
Advertisement

While most San Francisco 49ers fans were still grieving Monday morning, rapper The Game showed his continued support for the team in a unique way. The Game posted a picture of his 49ers-themed Dodge Challenger on Instagram yesterday. The rapper’s customized ride features two red stripes going down the center of the vehicle, 22-inch Forgiato wheels in the front and 24-inch Forgiato’s in the back. The Game also posted a photo of his new 49ers’s tattoo yesterday, which he had done at 7 a.m. on Monday.

No stranger to customized cars, The Game made headlines last summer when he purchased a leather-wrapped Ferrari F430 for $200,000 while in France. The rapper would later boast about the pricey purchase on Instagram writing, “Just spent all my show money (200K) on a leather Ferari 430…Cash!!!! Maybe I’ll regret it tomorrow… Maybe I wont!!! #ShouldntHaveEverGaveThemNiggasNoMoney” Although The Game seemed excited about the purchase; it doesn’t appear that he was overly concerned about correctly spelling the name of his new vehicle.

Aside from misspelling “Ferrari,” The Game suffered a similarly embarrassing moment in 2011 when he failed to correctly pronounce the name of his new Porsche Panamera. After numerous attempts to pronounce “Panamera” The Game ultimately settled on calling it a “Peter Pan on 24s.” The uncomfortable moment was caught on film by TMZ crew and can be viewed HERE.

Regarded as one of the top car collectors in his profession, The Game is the proud owner of dozens of high-end luxury vehicles. The Compton-based rapper’s collection was featured in a 2007 episode of MTV’s Cribs, which included his 2006, Bentley, 2006 Dodge Charger SRT, and a 2006 Lamborghini Murcielago. The rapper was also featured in a 2008 video for Dub Magazine, where he showcased a Range Rover, Chevrolet Corvette and a Can-Am Spyder.

LG's New EV Battery Plant Is a Welcome News for Tesla
Tesla Giga Berlin's New Hurdle: It's Not Only the Gov't, but Now Tesla Itself
END_OF_DOCUMENT_TOKEN_TO_BE_REPLACED