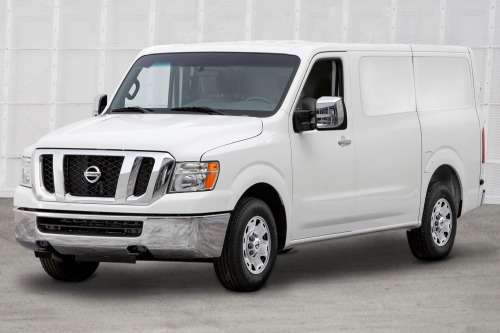 Nissan has recalled certain all-new NV high top commercial vans due to a transmission shifter problem, which may lead to vehicle roll away.
Advertisement

Affected by the recall is 18,880 model year 2012-2013 Nissan NV vans manufactured from December 20, 2010 through January 4, 2013. The vehicles in question are equipped with incorrectly installed steering column-mounted transmission shift levers that may display the wrong gear shift lever position. For example, the gear indicator may show that the vehicle is in Park when it is not. The incorrect display may cause NV vans to unexpectedly roll away. Not surprisingly, the safety issue may increase the risk of personal injury or a vehicle crash, according to the National Highway Traffic Safety Administration.

So what can owners do in the meantime to lower the risk of vehicle roll away? All Nissan NV owners should use the vehicle's emergency break when parking the vehicle. Doing this will ensure that the vehicle will not unexpectedly roll away regardless of any incorrect gear indicator displays.

Nissan first became aware of the problem in December 2012 when it received its first warranty claim for the column-mounted shifter cable clip. The automaker soon launched an investigation and later concluded that an assembly error was to blame. There have been no crashes or injuries reported, said Nissan. The NV's in question were built at Nissan's assembly plant in Canton, Mississippi.

This week’s recall marks Nissan’s third recall this month. Earlier this month, Nissan recalled five different 2013 models over a passenger airbag problem. According to the NHTSA, certain vehicles may be equipped with a passenger Occupant Detection System (ODS) that was built out of specification. As a result, the passenger airbag may not deploy in the event of a crash. The recall impacted an unspecified number of Nissan’s most popular models including the Altima, Sentra, Pathfinder, Leaf and Infiniti JX35.

Nissan also recalled nearly 400 model year 2013 Nissan Sentra compact cars because of a fuel tank defect, which may result in a fire. Affected Sentra vehicles may contain an improperly sealed fuel tank assembly, which may leak leak gasoline and possibly ignite when paired with an ignition source.

Introduced in 2011, the Nissan NV is a commercial van intended to compete with the likes of the Mercedes-Benz Sprinter, Ford E-Series, Ford Transit Connect, Chevrolet Express and GMC Savana.