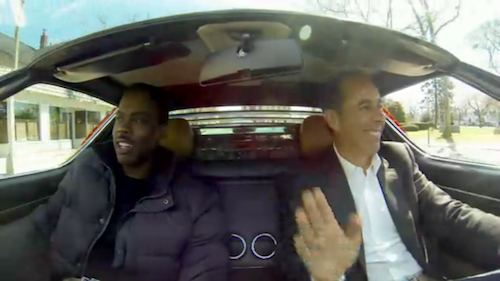 In a first for Comedians in Cars Getting Coffee, Jerry Seinfeld was pulled over for speeding in a classic Lamborghini Miura while filming the newest episode with comedian Chris Rock.
Advertisement

Jerry Seinfeld pulled out all the stops for the season finale of Comedians in Cars Getting Coffee. Last week’s episode may have been enjoyable, but today’s installment surpasses it in every way. Nothing against Seth Myers, but funnyman Chris Rock simply provides for a much more entertaining episode. Not to mention, this week’s car — a 1969 Lamborghini Miura P400 S — makes perhaps the most memorable appearance of any car in the show’s history.

As we’ve mentioned in past CiCGC reviews, Jerry Seinfeld does not simply pick a cool car for his guest — he chooses a vehicle that perfectly personifies him or her. This week, Seinfeld opted for an orange 1969 Lamborghini Miura, a car that Seinfeld calls “the most beautiful car ever designed.”

Why did Seinfeld pair Rock with the classic Italian sports car? According to Seinfeld, the Miura blew everyone away when it was introduced, just like Rock did when he arrived on the comedy scene. After being compared to the Miura, Rock jokes that it’s a “screaming, cursing black car.”

The Miura is equipped with a 360 horsepower V12 engine, which made it the fastest production road car when it was first launched. As for the vehicle’s unique look, Seinfeld argues that the Miura is the perfect combination of masculinity and femininity.

Despite Seinfeld’s praise, Rock seems initially unimpressed with the vintage Lamborghini. For Rock, it’s not the car it’s the company. That being said, Rock changes his tune later in the episode.

“Now I’m impressed by it. When you have it amongst the pedestrian cars you’re like ‘Oh s*** look at that,’” says Rock.

Now that we’ve established just how special this week’s car is, how about the comedian? Rock, who is known for his controversial subject matter, covers everything from jail to steroids to how kids need to be bullied.

Why do kids need to get bullied one might ask? According to Rock, bullying forces kids to overcompensate, which leads them to become some of the most influential members of society. “Who’s going to cure AIDS?” asks Rock. “Some guy that’s been bullied, that’s who.”

Upon leaving the diner, Seinfeld and Rock go for one more spin in the Miura. This time around, Seinfeld wants to show his friend just how fast the classic sports car can go. Unfortunately for Seinfeld, his lesson in speed ends with a police officer pulling the vehicle over. Watch the full episode below to see what happens next.