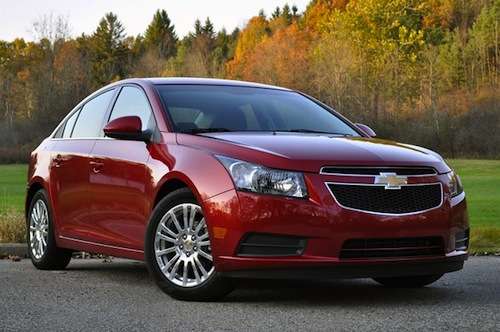 According to GM, the recall was issued due to a driver side frontal airbag problem, which may result in airbag deployment failure.
Advertisement

General Motors has announced it is recalling certain 2012 Buick Verano, Chevrolet Cruze and Sonic vehicles due to a potential airbag defect. According to the National Highway Traffic Safety Administration, the driver side frontal airbag contains a shorting bar, which may contact two internal airbag terminals. If this occurs in the event of a crash, the airbag may not deploy, thus increasing the driver’s risk of injury. The recall affects 2,949 GM vehicles in the U.S. and another 500 in Canada.

GM has not yet provided the NHTSA with a recall notification schedule. Once the recall begins, affected models will receive a new steering wheel airbag coil, free of charge. In the meantime, Chevrolet and Buick owners may contact General Motors at 1-800-521-7300 or the National Highway Traffic Safety Administration Vehicle Safety Hotline at 1-888-327-4236. The recall number is 12261.

According to the recall summary, GM first learned of the problem in June when 15 consecutive cars set off airbag failure notices. GM was then able to trace the root of the problem to a supplier plant problem. The NHTSA report indicates that the automaker identified most faulty models prior to leaving the showroom. GM also stated that no crashes or injuries have been reported.

The Chevrolet Sonic has been prone to recalls in recent months. In September, GM recalled 4,716 model-year 2013 Sonic compact cars due to a turn-signal lamp defect. GM also recalled over 44,000 model-year 2012 Sonic vehicles in August over windshield wiper issues.

As for the Chevrolet Cruze, it was involved in a massive safety recall in late June. The recall, which concerned almost 500,000 vehicles, was issued due to under-engine shield concerns. According to Chevrolet, affected vehicles require under-engine shield modification to ensure that flammable liquids do not get trapped in the engine compartment. The NHTSA report specifies that trapped engine fluid may result in a fire.

Wednesday’s recall marks the first safety recall issued on model-year 2012 and 2013 Buick Verano sedans. Unfortunately for GM, the recall occurred the same day the automaker recalled over 12,000 model-year 2013 Cadillac XTS sedans due to rear head restraint problem. The XTS recall specifically concerns restraints that may not lock in place, causing them to not meet federal safety standards.