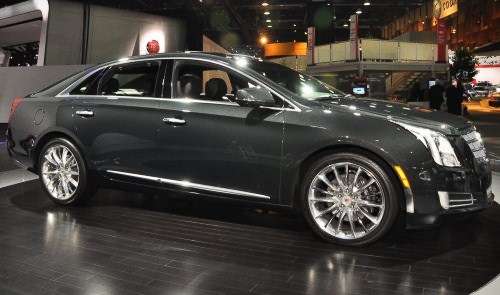 The National Highway Transportation Safety Administration has announced that General Motors is recalling a large group of the new 2013 Cadillac XTS due to a problem with the rear seating position headrests failing to conform to Federal Motor Vehicle Safety Standards.
Advertisement

This new 2013 Cadillac XTS headrest recall pertains specifically to those high end luxury sedans built between October 12th 2011 and August 30th 2012 with a total of 12,626 vehicles included. It is not completely clear but considering that General Motors has sold just 9,696 examples of the XTS during the 2012 calendar year, I would guess that the figure of 12,626 covers almost all of the new XTS large luxury sedans sold starting late last year and extending through those models sold up to and including last month.

In these affected 2013 Cadillac XTS sedans, there are adjustable rear seat headrests may not lock back up into the upright position after they have been folded down. These head rests fold down to improve visibility for the driver through the rear view mirror but when there are occupants in the rear seats – those head rests would be extended back into the full upright position. Unfortunately, it seems as though those head rests might not stay locked up and in the event of an accident, an unlocked head rest may fail to provide the intended amount of support. This increases the likelihood of a head or neck injury to rear-riding passengers and since the head rest is technically a safety feature that is not working as planned – these head rests fail to comply with the requirements of Federal Motor Vehicle Safety Standard #202 that pertains specifically to Head Restraints.

This recall officially began on Monday (November 12th 2012) with General Motors contacting owners of the affected 2013 Cadillac XTS sedan – asking that these folks schedule a visit to their local Cadillac dealership. A certified Cadillac technician will inspect and replace the rear seating head rest assemblies, free of charge to the customer.

Owners of these 12,696 Cadillac XTS sedans who would like more information can contact General Motors directly by calling 1-800-458-8006 or they can call the National Highway Traffic Safety Administration Vehicle Safety Hotline at 1-888-327-4236. The General Motors recall reference number is 12258.

While this might seem like a fairly minor safety risk, the head rest issue with the 2013 Cadillac XTS does pose a risk to those riding in the rear seats. There have been no injuries reported as a result of this problem but with a failure to comply to the stringent Federal Motor Vehicle Safety Standards, GM is making the quick (and smart) call to get these premium luxury sedans back into the dealerships for what should be a fairly simple repair.

The 2013 Cadillac XTS effectively replaced both the Cadillac STS and Cadillac DTS sedans with a fairly quick rise to popularity. Through the first 10 months of 2012, the XTS is already the 4th most popular model in terms of sales volume – trailing only the SRX, the CTS family and the full sized Escalade sport utility vehicle.

LG's New EV Battery Plant Is a Welcome News for Tesla
Tesla Giga Berlin's New Hurdle: It's Not Only the Gov't, but Now Tesla Itself
END_OF_DOCUMENT_TOKEN_TO_BE_REPLACED