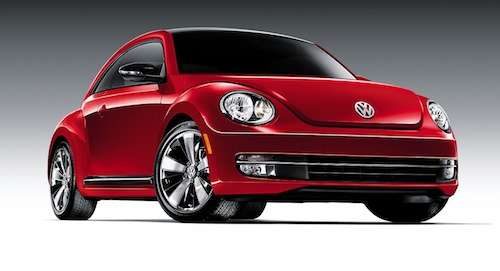 Expectations are high for the all-new 2012 Volkswagen Beetle. That said, it appears that the vehicle did not meet the high standards of Consumer Reports. While the consumer review site does concede that the new Beetle touts a more practical and masculine style, but cites that it “falls short of its potential” in the end.

While the engine may have some pep, Consumer Reports feels that the vehicle cannot handle it. “While the new car may look sportier, its sloppy at-the-limit handling doesn't live up to the reputation of VW's other sporty compacts,” said Consumer Reports. Not to mention, wind noise is “predominant” and the vehicle suffers from “overt cost-cutting measures.”

Aside from performance, the new Beetle has enhanced interior space, such as elbow room for front passengers and increased room for rear passengers. As for the interior’s appearance, Consumer Reports commends the Beetle for its less is more approach. Though the retro-styling appealed to the experts at Consumer Reports, its reviewers did not like the wide center consol, which hinders the driving position.

Consumer Reports’ mixed opinion appears right in line with the consensus reviews on U.S. News Rankings and Reviews. In fact, the 2012 Beetle ranks 30 out of 41 on U.S. News’ list of Affordable Small Cars. The Beetle earned a tepid overall score of 7.6 out of 10, based on 16 published reviews and test-drives. Unlike Consumer Reports, multiple reviewers included on U.S. News actually enjoyed the Beetle’s handling, calling it “fun to drive.” On the negative side the majority of U.S. News’ reviews found stated that the 2012 Beetle has sub-par fuel economy, tight rear sear and is too expensive compared to its competitors.

Frank Sherosky wrote on June 14, 2012 - 10:47pm Permalink
I think that reporting group are idiots. The car is hot, especially that turbo!
Anonymous wrote on July 10, 2012 - 2:59am Permalink
I almost bought one at the dealership, but when the window switch failed and dropped the window off is arm and into the door!!! This car was BRAND NEW!!!!!!!! God bless those Mexican workers at vw, I walked out of the dealer ship.