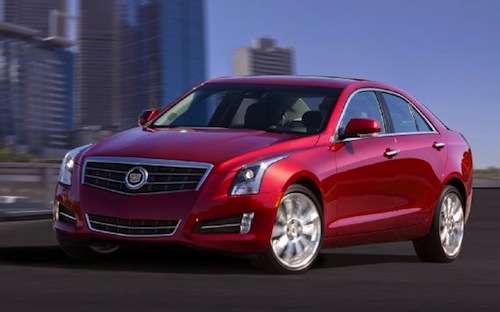 Cadillac to auction off first production 2013 ATS for charity

Cadillac has announced that is will be auctioning off the first 2013 Cadillac ATS produced for a customer, with all proceeds going to charity. The vehicle, which was recently built in Lansing Mich., will soon be up for grabs at Barrett-Jackson’s Las Vegas Auction on Sept. 20-22.

Barrett-Jackson’s upcoming auction will be held at the Mandalay Bay Resort & Casino, nationally televised on SPEED. Barrett-Jackson has agreed to waive its normal commission fee from the auction so 100 percent of the proceeds goes to Team Joseph, a non-profit organization that funds Duchenne muscular dystrophy research.

The inspiration for Team Joseph lies in the heroic story of Joseph Penrod. In 2008, a 5-year old Joseph was diagnosed with Duchenne, an inherited disorder that affects 1 in 3,600 boys. Caused by a mutation in the dystrophin gene, the disease results in muscle degeneration and eventually leads to death. Now 8-years-old, Joseph is currently fighting his battle against Duchenne in Michigan.

“There are therapies in development right now that could help this generation of children, but we have to keep the momentum going. Someday soon, when a child is diagnosed with Duchenne, it will not be a devastating disease but simply a manageable condition,” said Marissa Penrod, Joseph’s mother and founder and CEO of the organization. “Team Joseph is thrilled to be the recipient of Cadillac’s generosity through the donation of the first ATS.”

The ATS donation was a no-brainer for Cadillac. Vice president of marketing Don Butler expressed his eagerness to support Team Joseph and Michigan as whole stating: “Donating the first Cadillac ATS will allow us to raise money and awareness for a very important cause. It’s our way of supporting treatment for Duchenne, with some of that research occurring in our home state of Michigan.”

The vehicle up for auction is a crystal red, Premium-trim ATS. The fully equipped sedan includes a 3.6L V-6 engine estimated at 320 horsepower. The 2013 ATS also touts CUE, Cadillac’s in-vehicle experience that combines a unique driver interface with an innovative entertainment system.

Aside from the Cadillac ATS, five other vehicles will be auctioned off for charity at Barrett-Jackson’s Las Vegas auction. The other vehicles are a 2005 Ford Mustang GT Platt & Payne Signature Edition, 2012 Chevrolet Camaro ZL1 coupe, 1955 Chevrolet 210 hardtop, 1970 Chevrolet Nova custom coupe and 2012 Ford F-150 custom pickup.

Check out Barrett-Jackson’s auction on SPEED on Thursday, Sept. 20 through Saturday, Sept. 22. The Cadillac ATS will be sold at approximately 2:30 p.m. on Friday.