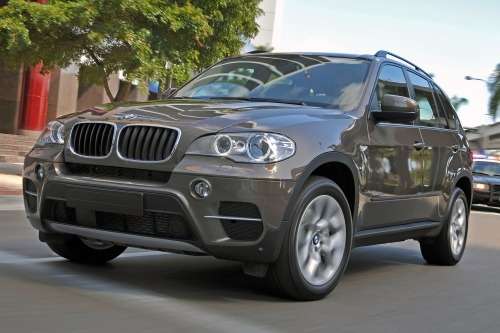 BMW recalls 35,000 X5 SUVs, explains when will drivers be notified

BMW issued the recall because certain X5 SUVs may suffer from power steering assist loss due to an improperly manufactured bolt.
Advertisement

BMW has announced it is recalling certain model-year 2009 through 2012 X5 SUVs due to a dangerous steering fault. The recall specifically covers xDrive 35d vehicles, a model with all-wheel drive and a diesel engine. According to the National Highway Traffic Safety Administration, affected models contain an incorrectly manufactured bolt, which may fail and cause loss of power steering assist. Consequently, loss of power-assisted steering may result in a crash. BMW’s recall involves 29,800 X5 SUVs in the U.S. and roughly 5,000 in Canada.

According to BMW recall notice, there have been no crashes or injuries reported in the U.S. and Canada. The luxury automaker also indicates that the problem was originally discovered in Canada during the warranty claim process. The recall states that the vehicle’s alternator warning light will illuminate in the event of power steering loss. If power assist is lose, the SUV can still be steered, but with increased effort.

BMW will begin notifying customers of the recall in January 2013. BMW dealers will replace defective bolts, free of charge. Dealers will also add a coating that helps prevent the bolts from coming lose. In the meantime BMW X5 owners can call BMW at 1-800-525-7417. Concerned customers may also contact the National Highway Traffic Safety Administration’s Vehicle Safety Hotline at 1-888-327-4236 or go to www.safercar.gov.

In June, BMW recalled about 2,600 model-year 2012 and 2013 X5 and X6 SUVs due to a separate power steering problem. Specifically, BMW’s safety recall concerned a power steering leakage problem, which may lead to an engine compartment fire.

Introduced in 2000, the BMW X5 was the automaker’s first foray into the sport utility vehicle market. Since the, BMW has expanded its SUV lineup to include the BMW X3 compact luxury crossover and the BMW X6, a midsize coupe luxury crossover.