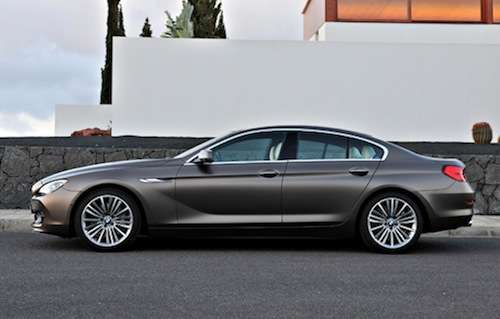 BMW has announced pricing details for the all-new 2013 640i Gran Coupe, which is set for release this summer.
Advertisement

BMW has announced the sticker price of their most recent 6 Series addition, the 2013 640i Gran Coupe. The all-new 640i will retail for $76,895 (including $895 destination and handling charge) when it hits showrooms this summer.

The first of the all-new 6 Series to be released, the 640i will be followed by 650i Gran Coupe and the all-wheel-drive 650i xDrive Gran Coupe. The 650i model will be powered by a 4.4-liter twin-turbo V8, which pounds out an estimated 445-horsepower. Like the 640i, the 650i has a top speed of 155 mpg, but can go from 0 to 62 mph in just 4.6 seconds. Pricing for these vehicles will be announced closer to their respective release dates.

BMW's 640i Gran Coupe includes 4+1 seating, which means that two full size adults and a child can fit in the backseat. The third rear passenger has to sit on an odd center hump, but it's still an improvement over the previous 6 Series 2+2 vehicle. The 2013 640i is also 4.4-inches longer than previous models, which gives rear passengers some added comfort.

Stay tuned for more vehicle specification updates and pricing for other 6 Series models in the upcoming weeks.