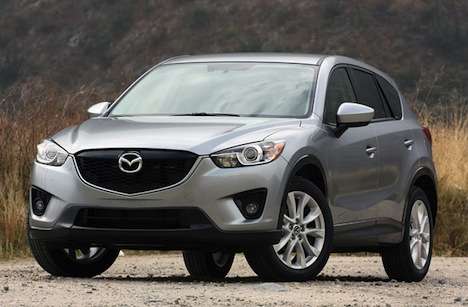 Mazda has partnered with the Universal Pictures animated film 'The Lorax' on a unique ad campaign.
Advertisement

Although Lexus and Ford recently chose to create ads featuring super models, Mazda North American Operations (MNAO) has decided to take a more wholesome approach. Mazda has just partnered with Universal Pictures and the new animated movie Dr. Seuss’ The Lorax, which opens March 2. Mazda’s press releases states that the automaker was chosen to be a partner with the film “because of its innovative SKYACTIV® TECHNOLOGY and commitment to empower consumers to make more informed choices for their families and the environment.” Like Mazda’s Skyactiv Technology, The Lorax touts an environmentally friendly message as its main character is a guardian of the forest.

The partnership has resulted in two commercials depicting a “Seuss-ifed” 2013 Mazda CX-5 crossover SUV driving through the "Truffula Valley,” which is featured in the film. The “Seuss-ifed” Mazda was created by Derek Jenkins, Mazda’s U.S. Director of Design and his team, along with Illumination Entertainment, the animators behind 2010's Despicable Me. The teams utilized sketches of the vehicle along with cutting-edge animation technology to come up with an animated version of the CX-5 that looks like it drove straight out of the movie.

The new ad appears to be the perfect opportunity for Mazda to cross-promote their new Skyactiv Technology according to Don Romano, chief marketing officer, MNAO:

"We're proud to be working with so many talented individuals to bring to life this wonderful partnership with Universal Pictures and Illumination Entertainment's Dr. Seuss' The Lorax movie. We take a strategic approach when it comes to partnering with other companies and with the launch of our all-new, fuel-efficient, performance driven SKYACTIV® TECHNOLOGY, this seemed to be a natural fit. The collaboration and integration that went into creating these custom-animated spots featuring the Mazda CX-5 with SKYACTIV® TECHNOLOGY driving through 'Truffula Valley' is unprecedented."

This point of view was echoed by Illumination Entertainment founder and CEO Chris Meledandri who said, "The Lorax character's view of the environment fits in exactly with Mazda and SKYACTIV® TECHNOLOGY, so the two were a perfect match for a commercial.”

Aside from partnering with a family friendly film, Mazda has also joined forces with the National Education Association (NEA) in their Read Across America Program. In an effort to raise NEA funds, Mazda has vowed to donate $25 per test drive up to $1 million from February 20 to April 2. The NEA Foundation provides support to struggling public school libraries nationwide.

The 30-second ad, featuring the voice of Danny DeVito, begins running Monday evening on television and on March 2 in theaters playing PG movies. Aside from TV and theatrical ads, the campaign will also include digital and social media to promote Mazda’s partnership with the NEA. The digital and social media aspect includes a co-branded Facebook page, an app and a call-to-action banner on www.mazdausa.com.

Mazda’s all-new 2013 CX-5 features a 2.0-liter Skyactiv-G gasoline engine and best in class fuel economy. The base price for the CX-5 is $20,695 and ranges up to $29,620 for a fully loaded model. The vehicle’s base price is higher than most competitors including the Hyundai Tuscon, Kia Sportage and Subaru Forester. Despite the price, Mazda thinks the CX-5 will revolutionize the small SUV market.

"The 2013 CX-5 is a look to the future of the Mazda brand," said Jim O'Sullivan, president and CEO, MNAO. "Our achievements in Research & Development have led to breakthrough engineering with SKYACTIV TECHNOLOGY. It shows not only in the CX-5's impressive fuel economy but also with its dynamic handling and performance, which only Mazda can bring to the compact crossover SUV segment."