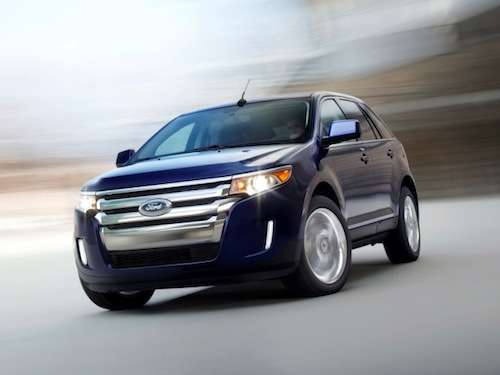 According to Ford, a parts supplier error is to blame for the newly issued recall.
Advertisement

The recall concerns Edge SUVs equipped with 2.0-liter engines. Such vehicles may contain a faulty fuel line component, which may crack due to a manufacturing error. The crack may result in a fuel leak, thus creating the conditions for a fire under the hood.

The defective fuel line part is the result of parts supplier error, according to Ford. The automaker stated that it is aware of 12 fuel leak cases after investigating warranty claims. There have been no accidents, injuries of fires reported so far.

Ford is expected to being notifying customers of the recall on, or about, Sept. 24. Vehicles involved in the recall will receive fuel system repairs, free of charge. In the meantime, concerned customers can contact Ford at 1-866-436-7332, or the National Highway Traffic Safety Administration at 1-888-327-4236 or http://www.safercar.gov. Ford’s recall campaign number is 12S40.

The news marks the first ever recall issued for the 2012 Ford Edge. The 2011 model, however, has been recalled three times since it was released in 2010. Interestingly, the 2011 model was recalled on two separate occasions over fire concerns. In total, Ford recalled more than 22,000 Edge models due to an electrical short issue, which could result in a fire. As is true with the 2012 recall, there were no reports of 2011 Edge SUVs catching fire.

The 2011 Edge was also involved in a minor recall involving the vehicle’s liftgate system, which involved just 70 vehicles.

Despite the current recall, the 2012 Edge earned impressive safety ratings, according to U.S. News. The midsize SUV earned an overall score of 9.0 out of 10 from U.S. News and was named a Top Safety Pick by the Insurance Institute for Highway Safety. Safety aside, the 2012 Edge ranked a notable 6 out 21 on U.S. News’ Affordable Midsize SUVs list.

Tesla Contemplates A New Strategy for China Retail even As Sales Boom
Jay Leno on Elon Musk & EVs: “I Think He Should Get ... Credit"
END_OF_DOCUMENT_TOKEN_TO_BE_REPLACED