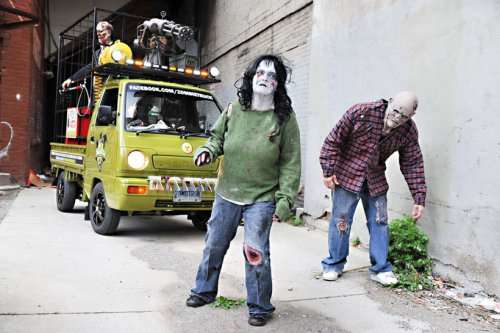 The Zombie Disposal Unit ready for the apocalypse

If the zombie apocalypse starts in the Great White North, then the Haunted House of Horrors in Kitchener, Ontario will be ready with the Zombie Disposal Unit, aka "Zombie Truck." When it comes to sweeping the streets of the undead, the ZDU is top of the line.
Advertisement

When the zombie apocalypse comes, will you be ready? If you're not prepared to chop off a hand and replace it with a chainsaw, then maybe this converted Suzuki Carry mini truck will do a better job for you.

Created as a promotional vehicle for the Haunted House of Horrors in Kitchener, Ontario, Canada, the Zombie Truck was fitted from the ground up as a zombie hunting, collection and disposal unit. It includes a six-foot-tall containment cage that can hold up to 8 zombies at a time. Then, auxiliary lighting keeps the zombie prey lit up while you're on the hunt, a front bumper fitted with blades decapitates zombies that try to rush your truck, a 100W siren (with custom zombie sound effects) can be used in attracting quarry, a WW2-style Gatling gun sweeps the streets of zombie hordes, and a vinyle graphics package lets the world know that you're in the zombie catchin' business.

Inside, the seats and door panels are camouflaged to keep you in the hunting mood while the floor is coated in truck bed liner so it's easy to clean up the bloody mess when you get back to base. Zombie hunting accessories inside include a zombie bite emergency kit, a dash-mounted shotgun, and an LCD screen displaying the customized zombie-tracking GPS system.

“The vehicle was conceived as a promotional vehicle for the haunted attraction we run every October, however it has turned into something much greater than that” said Shawn Gusz, the vehicles creator. “Zombies have become a huge part of pop culture in recent years, and have become the most important part of the horror genre thanks partly to an influx of zombie films and TV shows such as ‘AMC’s The Walking Dead’. I think this truck will really resonate with zombie and other horror lovers alike,” says Gusz.

When on display or going through a parade, the Zombie Disposal Unit uses mannequin zombies to show off the truck's capabilities. These were made by Haunted House Creations in Toronto. The truck will be touring car shows, zombie walks, and horror fan conventions throughout Canada and the upper United States. Check it out on its Facebook page.