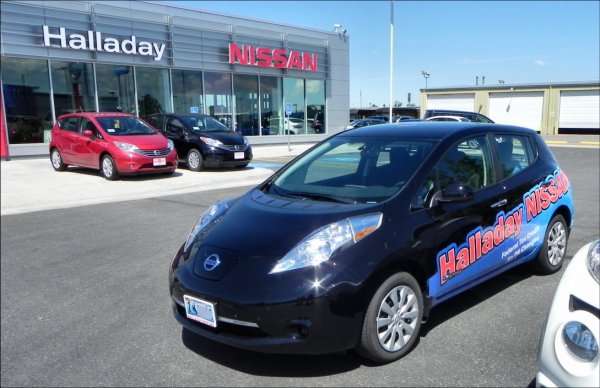 Why a Nissan dealership in Wyoming became LEAF certified

When you think "Wyoming," you think "electric cars." Right? Well, maybe you should.
Advertisement

Let's say you're a Nissan dealership in Cheyenne, Wyoming and you want to get people to think of you when they think "cutting edge." What do you do? Well, if you're Halladay Nissan, you become LEAF certified so you can not only sell, but fully maintain and service the world's best-selling electric car.

Wait? Electric cars in Wyoming? The population of Cheyenne is only about 58,000 people. Not exactly a metropolis. Sure, there is a Tesla charging station there now, but I personally have yet to see an actual Model S parked there.

So imagine my surprise when driving through downtown Cheyenne, near the hospital, and a black Nissan LEAF passed through the intersection ahead of me. I was so amazed, I actually followed it. It had Wyoming plates and looked new. I saw the little dealer's decal on the car: "Halladay Nissan." A little while later, Nissan's corporate office called me to ask me if I'd like to talk with the folks at Halladay about their recently-acquired LEAF certification. I immediately blurted out "What? Here? In Wyoming?"

I called the general manager at Halladay Auto Group, Jim Casey, and set up an appointment. When I arrived, he introduced me to Rob Schumacher, Sales Manager at Halladay Nissan. Turns out, Rob and I have two things in common: we both love cars and we both can talk all day about them. We hit it off nicely. Over the next hour, we discussed why the Nissan dealership in Wyoming would become LEAF certified, where (and who) the market for the electric car is, and I met several key people at Halladay who are a part of the LEAF program there.

Schumacher told me that when the LEAF arrived on the Halladay Nissan lot, it was not a hot seller. They received six and within weeks it had become obvious that short of a few curious test drives, the cars weren't selling. Eventually, they were traded to other lots, mostly in Colorado, who had customers ready to purchase. Schumacher, however, thought "There's something here. I know it," and kept one of them. He wrapped it in a Halladay Nissan body wrap (seen above) and began using it as his personal vehicle. Upon receipt of the original group of LEAF cars, the dealership had installed a charging station in the shop.

Eventually, someone arrived asking about a LEAF and interested in buying one. There were none on the lot, but Schumacher made the deal and got the couple a LEAF. Then another person arrived asking about the electric car. So Schumacher did was any good sales manager would do: he considered the market he was in and thought about who was asking about the car and what made them interested. Turns out, there are more than a few people like that in Cheyenne, Wyoming. So Schumacher went to his boss, Casey, and presented a plan.

About three months ago, Halladay NIssan became LEAF certified by Nissan. They have a public charging station, and two people in their shop that can work on the car. Don Rodriguez, shop manager, took several online courses to become a certified shop lead for the LEAF while lead technician, Larry Failor, took those courses plus a four day hands-on course in Texas to become fully certified in all aspects of LEAF diagnostics and repair.

This certification is no small thing. Failor had to learn everything from pulling codes and doing diagnostics on the EV all the way down to removing the battery pack, opening it, and replacing bad cells or modules before putting it all back together and back on the car. The Halladay Nissan shop is fully equipped to do all of that.

In the three months since they've been certified, Halladay has sold three LEAFs to customers in Cheyenne. That may not sound like much, but remember, this is Wyoming and selling an electric car is an uphill battle here. But things are changing. The Cheyenne Regional Medical Center has charging infrastructure in their parking garage and is in the process of installing the chargers now that one of their employees has a LEAF to plug into it. In the meantime, that employee sometimes parks at Halladay to leave his LEAF to charge and Schumacher or one of his staff takes him to work and picks him up at the end of the day. They have a publicly-accessible charging station with three parking spaces reachable by its cord.

Schumacher says that interest in the LEAF is growing as the word gets out. The Wyoming buyer is likely to be purchasing the car as a commuter vehicle for everyday driving around town, it will be a second or third car, and it's likely that they do not need to charge at work in order to get home - most are driving 20-30 miles in total, daily.

Casey agreed with that and stated that when they first looked at LEAF certification, they'd discussed the household of the common customer in Wyoming. Most have two or three cars and have a small one they use as their daily driver to and from work and to get groceries. So there is an obvious slot for the LEAF to fit in with many households buying vehicles in Wyoming.

Although you may not think "electric car" when you think of Wyoming.. that might change soon.

Ron Warrick wrote on August 5, 2014 - 10:30am Permalink
Wyoming is not the ideal place for an electric car. With its long distances and coal-fired electricity, they are just a novelty. But every sale helps the movement.
Aaron Turpen wrote on August 5, 2014 - 12:09pm Permalink
Ron, you're right on most counts, but Cheyenne itself is different. Most of the power on this side of the state is actually natural gas (and some wind). As I pointed out in the article, though, short-distance driving is common in Cheyenne and (likely) Casper as well. Again, these are not the primary vehicle for most people, but a second or third instead. Most people around here have a "big" vehicle they use for family hauling (van, truck, SUV) and a smaller vehicle they use for daily driving. The LEAF fits into that second slot in many households, if they'd just consider it.
VFanRJ wrote on August 6, 2014 - 12:32pm Permalink
It may be the 2nd or 3rd vehicle but the Leaf will be the one getting the most miles racked up on it.
Joe wrote on August 6, 2014 - 6:09pm Permalink
Just give a Chevy Volt.
Aaron Turpen wrote on August 6, 2014 - 10:04pm Permalink
Ya, sure. Spend way more money, get a car that's less versatile, and one that has a higher cost of ownership to boot. Good plan.
joe wrote on October 21, 2014 - 5:36pm Permalink
Aaron, Why would I want to buy two vehicles, have to pay insurance on both, up keep on both when all I have to do is buy a Volt and can drive any where any time and not have to keep stopping to charge. I would have to buy another car to handle long trips wouldn't I Aaron. I will stick to my Volt.
Aaron Turpen wrote on October 21, 2014 - 6:05pm Permalink
Because, as I said in the article, had you bothered to read it, most people in Wyoming are two-car owners. The Volt sucks here. It has no ground clearance, drives like crap on unpaved roads, and is overpriced for what you're getting. Nevermind it's lack of versatility and too-small interior. Sure, the VOLTEC idea is great in theory, but the Volt itself is not that great in practice outside of very specific areas and uses. Same with the Tesla Model S and all of the other vehicles that have such a rabid group of evangelists behind them. Unlike the Volt, for example, you can get two weeks' worth of Sam's Club/Costco shopping into a LEAF and still drive away with three or four passengers besides.